Skating on thin ice: The story of a single dad

A single dad tries to find a way to help his teenagers pay for university and still save money for a modest retirement.

Ten years ago, George Alonzo had the shock of his life. He arrived home from his job as a pastry chef at a hotel banquet hall to find his mother babysitting his three young children. She pointed to a note on the kitchen counter left by his wife, Margie. The message? Margie had left George and their three young sons—Peter, six, and the twins Lucas and Patrick, both three—for a new boyfriend she had met at the local coffee shop. “She left me the house and the kids, then left town with another guy,” says George, 45, now a salesman for a restaurant equipment company in Kingston, Ont. “I guess she thought life was greener on the other side. She found it wasn’t but I was left to pick up the pieces with my kids, and that’s what I’ve been doing for the last 10 years.”

George and Margie (we’ve changed their names to protect their identities) have tried a few times to work out their differences and reunite but it always ends badly. George says it’s because Margie can’t hold down a job or stick to any commitments she makes to the family. “I can’t tell you how many times she’s shown up at my doorstep asking for money and threatening to sue me for my pension,” says George. “The divorce papers were signed seven years ago but I’m always afraid she’ll make good on one of her threats and take me to court again. It’s stressful.”

George has full custody of his sons, while Margie sees them four days a month. “I no longer give her any money to help her out.” George says he’s ready to move on and secure a better future for himself and his sons.

“I struggle every day just to keep things running smoothly with the kids as well as with my finances,” says George. “The boys are very active and keeping them busy is expensive. They’re in hockey and football and the occasional summer camp. That adds up and I’m finding it hard to save any money.”

George’s largest asset is his $230,000 three-bedroom, semi-detached home in Kingston. But it carries a $189,000 mortgage with a long amortization. He’s finding it difficult to afford the upkeep: his biggest concern is the $3,500 in repairs that need to be done to the roof. “I’ve come to think owning a home has become too expensive for us,” George says. “There’s a lot of maintenance I just can’t afford.” He wonders whether renting a home would reduce not only his stress, but also cut his expenses and allow him to start saving for the future.

George is serious about that option, not only for the financial benefits, but because he may need to move anyway. His company is restructuring and his employer will probably relocate him to London, Ont., soon. “If that happens, I’ll have to sell the house,” he says. “Should I buy a new house in London or simply rent? What’s better financially? I know I need to start saving money.”

George would like to accomplish three things: help his kids pay for university, save for retirement, and retire debt-free. He recognizes this will be difficult. He hasn’t made an RESP contribution in over two years. He hasn’t contributed to his RRSP during that time either, but he is part of his company’s defined contribution pension plan. Right now he contributes $3,500 a year to the plan—an amount his company matches—and all the money is invested in mutual funds. “That’s all I really know about my investments,” says George. “It’s sad but true.”

As for being debt-free by retirement, he’s not quite on track to do that either. His mortgage isn’t scheduled to be paid off for another 22 years, by which time George will be in his late 60s. “I’m a simple guy who’d love to live in a trailer near the water and drive his motorcycle across the country when the kids are gone. Is that kind of retirement possible for me?”

George shakes his head when he compares his life to that of his parents while he was growing up in Brighton, Ont. “My mom cleaned houses and my dad was a plasterer,” he says. “They worked really hard, paid off their house and saved what they could. For me and my older brother, Mike, there was always hockey. It was our one indulgence and the highlight of our week.”

George started working part-time as a fast food cook at age 15, graduated from high school in 1987, then went to George Brown College in Toronto to train as a chef. That’s where he met Margie, who was in the same program. In 1989, he got his first job as a pastry chef at a hotel in Kingston.

In 1997, George and Margie married and had three kids in the next six years. In 2003, the couple bought a house together. Margie left six months later, and in 2005 they were divorced. “Margie was brutal with money, so after the marriage was over, I had to pay off about $50,000 in debt,” says George.

But even though George’s budget suggests a net disposable income (after all expenses) of $2,145, he says he has nothing left at the end of the year. “I’m barely breaking even. I just can’t manage to save and that bothers me.” George’s largest variable expense is the kids’ activities. “My two youngest are in hockey,” he says. “Registration fees, skates and tournament fees really put a dent in my monthly expenses. But the boys love it and I can’t say no.”

George has run the numbers. He figures he could rent a house for $1,600 a month all-inclusive—whether he’s in Kingston or London. He feels renting would help his situation, not only by saving him a few thousand dollars compared with the mortgage payments and property taxes he faces now, but also by getting him out of doing $10,000 or more worth of maintenance on the house—maintenance he’s put off for years.

Finally, he needs to take a closer look at his investments. His RESP and RRSP savings are all in equity mutual funds with fairly high fees. “I don’t have much time to monitor my investments. I feel good even if I just make any sort of contribution.”

What the family cherishes most is their annual vacation. George rents a cottage for a week every summer. “We really kick back and relax when we’re there,” he says. “They’re great kids and our relationship is solid. I’m just hoping my finances will be just as solid one day.”

Raising three kids can stress your life and your finances. “For George just to break even every month is a huge accomplishment,” says Annie Kvick of Money Coaches Canada in North Vancouver. Still, Barb Garbens, a fee-only Certified Divorce Financial Analyst in Toronto, cautions that George’s job isn’t over yet, as his youngest sons have just entered their teens. “George is going to be squeezed financially for 10 more years,” says Garbens. The solution? To prioritize his goals and find the discipline to stick to his plan.” Here’s what George should do.

Decide what to do with the house. While selling his house and renting would save George $3,000 a year plus maintenance costs, he should rent only if he is able to redirect the money saved either to his children’s RESPs or his own RRSP. “Owning a home is a forced savings plan that builds equity,” says Kvick. “That’s a positive.” 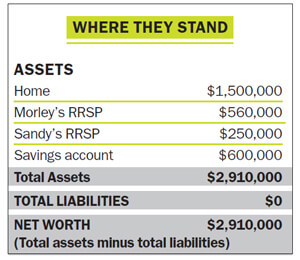 Garbens, meanwhile, thinks George should sell the house. “He should take the money he clears from selling the house (about $36,000 after commissions and legal fees) and pay off his $24,000 car loan,” she says. That will leave him with $12,000. Garbens advises George to leave $6,000 in an emergency fund and put the remaining $6,000 into the RESP for the kids. “He’d get the 20% government grant,” says Garbens. “That’s free money for the kids and it would be a shame not to claim it for them.”

Set up pre-authorized monthly payments. Both experts feel George needs a forced savings plan once he sells his home. After selling the house and paying off his car loan, George will have disposable income of $10,645 annually (the $2,145 his budget shows now, plus $5,500 from annual car loan savings, and about $3,000 from renting instead of owning). Garbens advises George to put half that surplus into RESPs for his kids each year until they’re no longer eligible for the government grant. He should direct the other half into his own RRSP. “He should set up a pre-authorized monthly contribution from his savings account,” Garbens says. “This will allow him to save a decent amount of money for his kids’ post-secondary education. If they need more, they can get it through loans and part-time jobs.”

Keep investing simple. George can reduce his mutual fund fees and get broad diversification in his RRSP with a simple balanced fund that should reward him with a decent 4% annual return over the long run. “Pick one good balanced fund and reinvest all the dividends,” says Garbens. “He’ll do just fine.”

Focus on retirement savings when the nest is empty. When Lucas and Patrick head off to university in five years, George won’t have to foot the $6,500 bill for the kids’ activities. The $5,000-plus he was putting into RESP savings will also end. He should redirect most of that money to his TFSA and RRSP for the next 15 years, until he’s 65. If he can do that, George will be able to retire at age 65 with enough to fund a simple but comfortable lifestyle.

Julie Cazzin is an award-winning business journalist and personal finance writer based in Toronto. Read previous Family Profiles and other stories by Julie.