A walk-in closet you can see yourself in 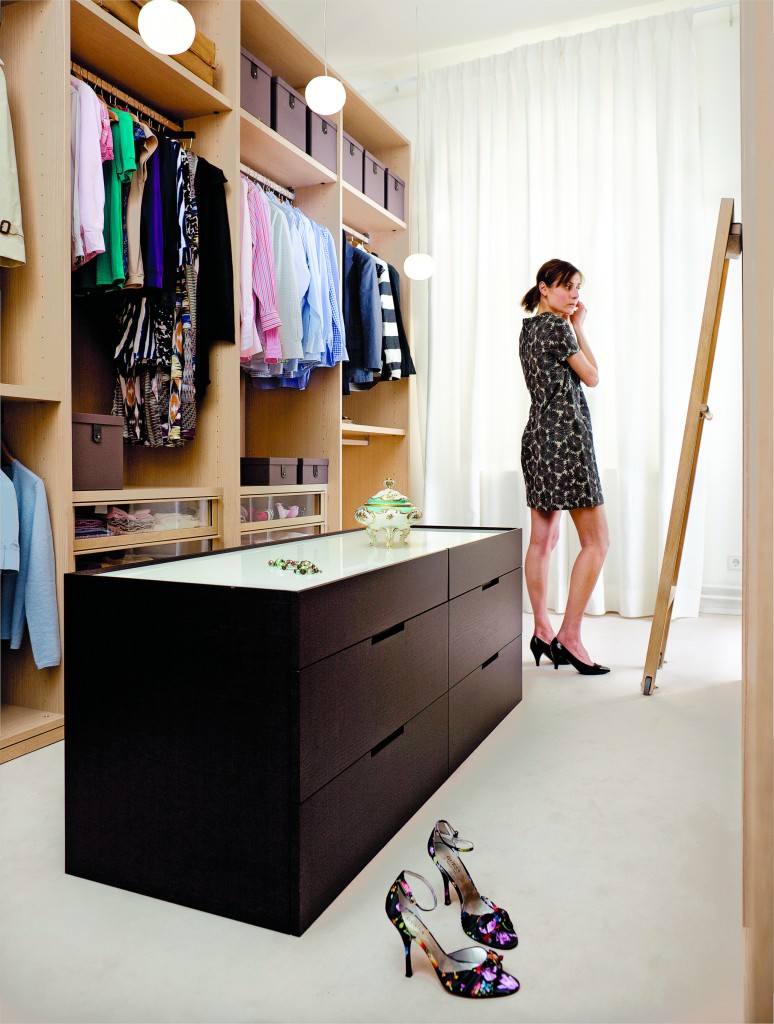 How did we end up with so many things? Why are North American closets bursting at the seams? We could speculatively blame a confluence of factors for our over-acquisitive ways—offshore manufacturing and faster fashion trends making clothes cheaper; online and big-box retailing driving prices further down. And an aging population is a population that has had more time to accumulate clothes and other possessions—not to mention more likely to have adult children who have left their own things behind at the parents’ house. Anyway, the more pressing question is: What are we going to do with all this stuff?

For those blessed (or cursed) with a surplus of clothing, a walk-in closet is a fantasy solution: a vision of harmonious domesticity; order where there was once chaos. The walk-in closet has become more of a fixture in Canadian homes since the mid-2000s, says Tom Turnbull, the owner of Uxbridge, Ont.-based Kwik Kloset, ever since home organization became its own genre of aspirational reality TV. “When I started the business in 2003, it was a good time because attention was just starting to be paid to the whole organization thing in homes,” he says, recalling his own appearances on the programs Renovate My Wardrobe and Love It or List It.

With television fuelling consumer dreams of more orderly wardrobe organization, big-box players such as Home Depot and Lowe’s began offering their own solutions. “As a result of their entry into the market, home organization became much more available to the general public than it used to be,” Turnbull says. And with competition has come innovation, with the customer coming out the winner. Depending on the size and complexity of the project, a walk-in closet could cost anywhere from $1,000 to $50,000 and up. From home improvement stores to high-end custom contractors, makers of closet solutions strive to make the process as friction-free as possible—all the better to ensure you complete the project before your resolve starts to flag.

Alicia Carroll, national public relations manager for Ikea Canada, says it wants everyone to achieve the dream of a serene and orderly closet space, “and it’s possible to achieve.” Consumers can assemble a perfectly viable walk-in closet space using its Pax line of wardrobe cabinets for $1,500. For those who lack the will or the Allen-key skills, the Swedish retailer can send an assembly team to your home.

Spend a little more and you can end up with a custom solution. Turnbull’s Kwik Kloset is able to offer most custom walk-in closet projects for less than five figures—the average, he says, is $3,500. And he promises a fast turnaround thanks to his proprietary, computer-aided design system. “I figured there had to be a better way to run  a lower-overhead business so I could charge less and get the solutions to the customer quicker than other [custom builders] were doing,” he says.

How much space do you need? Four-foot-by-ten-foot makes for a viable walk-in closet, though homeowners are devoting ever-larger spaces to storage. “There’s a bit of a trend in terms of turning a whole room into a walk-in closet,” says Carroll. “For instance, for the older generation, their kids are moving out. They might turn one of the rooms into a big, walk-in closet.”

Past a certain size, a walk-in closet becomes comfortable to actually walk around in. Thomas Tampold of Yorkville Design Centre in Toronto says couples are increasingly thinking of closets not merely as storage zones but instead as pleasant spaces to spend time in. “It’s a place of repose as well as a place to set out your clothes.” Furniture is often seen in the higher-end walk-in closets—the better to sit with a glass of wine while a friend or partner tries on an outfit—and so are islands in the middle of the room—handy for folding. A clever possibility combines the two: how about an island that incorporates seating?

Consultation between contractor and client at this end of the market can be extensive; every detail needs to be discussed down to customized boxes to put possessions into (and even custom leather pulls for the lids of said boxes). “The cost can be as pricey as a kitchen,” Tampold says. A $50,000 walk-in closet project is not unusual for a luxury home, a cost that Yorkville helps justify through its attention to the quality of the build. “It all has to run smoothly and last for 25 years minimum.”

Tampold promises that investment in details like wood finishes and soft-close drawers will pay for itself with a serenity dividend while Turnbull of Kwik Kloset adds, “it starts the day on a good note” when you find what you want to wear right away instead of having to dig around. The message for those who harbour fantasies of one day getting their stuff in order: it works. People who have had their closets professionally rebuilt, Turnbull says, claim “they’ll never live without it again.”