How to maximize space in a tiny home

When she and her husband moved their family of four to Toronto last year, Tanya Frenette knew a small living space was in store: They had lived a cramped city life before, and in between had spent several years in Vancouver—hardly a mecca of mega-sized homes, either.

Tanya admits her North Toronto apartment is compact: It spans some 850 square feet, which she shares with a 10-year-old daughter, four-and-a-half-year-old son and conspicuously tall husband she acknowledges “is not a small guy, but you make it work.”

For the Frenettes and hundreds of thousands of other Canadians—particularly younger households in the largest cities—living in tiny homes has become the new reality. “It’s a lifestyle. There’s no way on earth we want to have a mortgage that’s $600,000, it just doesn’t make sense,” she says. “So you force yourself to live small in your head as well.”

As the principal of the design-and-build firm Smallworks and a founding director of Small Housing BC, Jake Fry meets a steady stream of Vancouverites, just like the Frenettes, who are also making the deliberate choice to maximize their incomes by minimizing square footage. His firm has built more than 100 small houses, some as small as 300 square feet, both for cash-strapped first-time buyers and empty nesters cashing in some equity and downsizing.

Fry says the ever-larger homes of the 20th century were more about the profits of the builders than the living needs of the buyers, and “we’re starting to see a reaction against that” and a cultural shift toward living efficiently. Like Frenette, Fry sees smaller homes as a positive development—a realistic solution to big cities’ need for increased density and vibrancy.

But a small home opens up new challenges. Architects, interior designers, organization consultants and veterans of tiny-home living agree: Living large in a small space works best if you embrace it as a way of life in itself. Here are some rules to live by.

Make the city your backyard. Many of Canada’s small homes are concentrated in larger urban centres, and Frenette is among those who maximize their time out of doors instead of spending it cooped up. It might take a little money and effort to set aside more of your budget for eating out, or to take in cultural events instead of cocooning with the tube, but what’s the point of putting up with the hassle of living in a big city if you don’t do those things?

Buy furniture with a tiny footprint. Owners of small homes have to be deliberate about buying storage and organization products. “Our job is to activate the inner neat freak in our customers,” says Andrew Livingston, owner of Neat, a Toronto-based chain that specializes in products for home organization. With two locations, Neat has flourished since opening in 2008 thanks to what Livingston calls the “Manhattanization” of the city, which has created a need for everything from space-efficient laundry hampers to tiny, perfect office furniture. Indeed, “narrow is your friend,” says Mike Dalla-Giustina, one half of the brother-sister interior decorator team Tiny Beaches. “Narrow tables can be especially helpful, as a console can double as a computer workspace or an extra table for serving when entertaining.”

Frenette has also come to rely on furniture with hidden compartments for stashing items. “Everything that has storage on the inside makes my life easier,” she says.

Make use of smart construction. Living in a box “is a lot about compromise,” acknowledges Dalla-Giustina. But with a healthy budget, even walls can be pressed into greater utility. For example, you can hire a carpenter to make built-in shelving or install a murphy bed. For the more frugally-minded, even a wooden surface that folds down from the wall can serve as a desk.

Play tricks on the eye. Livingston says acrylic “ghost” chairs and other see-through furnishings are a neat way to extend a room. A horizontal mirror behind the dining table, for example, will make your guests feel as though there’s open space in all directions.

Spotlight unique items. If you’re going to be surrounded, you may as well share your space with beautiful things. Toronto’s Neat stocks brooms by Sweden’s Iris Hantverk that could be admired as objets d’art for the serenity of their gentle angles. Still, Frenette acknowledges you simply have to say no to certain things, and that entails sacrifice. “Everything in our home has to have a distinct purpose.”

Frenette looks around her neighbourhood and concludes that she’d rather have a small home and a balanced life than a large house she can’t afford to enjoy. “People around us live in these massive houses. But they’re working their butts off to be in those houses,” she says. “That’s crazy to me.”

7 hacks to create the illusion of more space 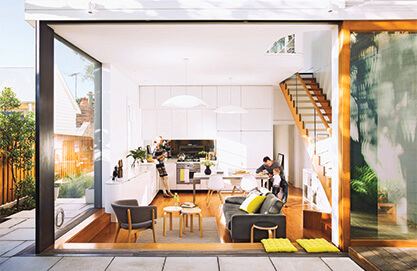 If you can't afford a bigger home, why not get creative in a smaller one? By using a few simple furniture design tricks, your tiny abode can become a way of life you enjoy. Here's some unique furniture pieces to consider: