More than meets the eye

At $490 per eye, laser eye surgery has never been so cheap. But what are the risks? 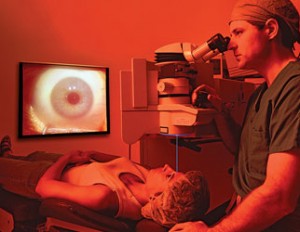 It took a week of sore eyes, crusty lashes and bottles of eye drops for me to permanently see the world with 20/20 vision. And it was worth it.

As an avid backwoods camper and climber, I dreamed of unchaining myself from prescription glasses and contact lenses. So, when billboards on the way to work promised a safe and easy procedure for only $490 per eye, I decided it was time.

I’m not alone. Since the late 1990s, when laser eye surgery (also called Lasik) first became available to the public, more than 28.5 million procedures have been performed worldwide. A small percentage are done for professional reasons—some sports stars and military personnel are required to undergo the surgery. But the vast majority are done for a simple reason: a desire see the world clearly.

The only problem is, not everyone does end up seeing the world clearly—a significant issue that recently prompted a shift in how the U.S. government tracks the safety of the procedure. In 2010, the U.S. Food and Drug Administration and the Department of Defense announced a collaborative study with the National Eye Institute to assess patients’ quality of life after treatment. It’s the first study to take into consideration how a patient’s expectations influence his or her decision to have the procedure performed. It has also helped fuel more discussion about whether Lasik practitioners are adequately explaining the risks of the surgery to potential patients.

So how safe is it?
Despite a crop of websites dedicated to horror stories, the statistics show that at about 95% of all patients report being completely satisfied with the results. This is based on an American Society of Cataract and Refractive Surgery review of more than 3,000 peer-reviewed studies conducted over the last 20 years. Of the 5% to 10% not completely satisfied, most will need an “enhancement”—an additional surgery to rectify an under- or overcorrection.

That’s an acceptable rate, says Dr. Guillermo Rocha, an eye specialist and refractive surgeon at the ImagePlus clinic in Winnipeg. “Eye surgery, in general, is very safe. But it’s surgery, and with any surgery there are always risks.”

Potential laser eye surgery patients should be warned about the possibility of under- or overcorrection, dry or itchy eyes, infection and potentially permanent visual aberrations such as haloes or blurred vision. While these occur in only a fraction of patients, recent criticism by Morris Waxler, an ex-FDA regulatory official, is putting the procedure into the public eye. According to Waxler, Lasik either fails to improve vision or causes serious side effects in over 50% of patients.

It’s a statement that baffles Rocha. “If 50% of our patients had problems, we wouldn’t be performing the procedure. With that kind of batting average, it’s just not rewarding.” Rocha is, however, concerned that the industry is doing a poor job of managing expectations and educating the public. “We consider a surgery a success if a patient’s vision improves to 20/40 or better, and we only expect 70% of patients to walk away with 20/20 vision.”

An eye-opener
That’s a far cry from the sales pitch I heard during my initial visit to a downtown Toronto Lasik clinic last year. Sitting across from a saleswoman—a bubbly lady with absolutely no background in medicine—I was whisked through a six-page document filled primarily with procedure costs and financing options. Every once in a while she would circle the optimal choice and move on. At no time did I meet the surgeon. At no time was I warned that my vision may not be 20/20 after the procedure, or that I may need additional surgeries.

These are oversights that concern Rocha. “Our job as surgeons is not to convince the patient to have the procedure,” he says. “Our job is to present the options with all the pros and cons and help you make an informed choice.”

Hidden options
It’s especially important to know all the options because in some cases, Lasik isn’t the best one. The technique isn’t well suited for people in certain jobs, such as firefighters or boxers, because of their higher risk of eye trauma. With Lasik, a surgeon cuts a flap in your epithelium (the outer layer of cells covering your eye) before reshaping your cornea. This flap begins to close within 48 hours of the surgery and is more than 75% healed within seven days. However, any traumatic damage to the eye could re-open the surgical flap.

For that reason, another procedure, known as PRK, is the procedure of choice for the U.S. military, NASA and sports stars. During PRK the epithelial cells are scraped away. This makes the procedure more painful and the healing process slower—with most patients requiring a week of bed rest. But it’s considered a better procedure for people with large or complicated prescriptions and for people with thinner corneas. Plus it’s 25% cheaper than Lasik.

The next wave
Still, most people opt to pay extra for the convenience of Lasik, which lets you resume activities in as little as 48 hours. If that’s the case, then the next decision will be between the standard or custom treatment (the laser centre may use the terms conventional versus wavefront). With the standard treatment, a laser is programmed with your prescription before it uniformly reshapes your cornea. The custom procedure uses the same laser, but it takes into consideration the individual topography of your eye.

“Wavefront is more customized,” says Rocha, “and this leads to a greater chance of better vision.” Recent studies show that the wavefront procedure has dramatically cut down the number of night vision problems—the most common complaint from dissatisfied Lasik patients. But the new technology comes with a bigger price tag. I was told that the wavefront procedure on both eyes would set me back $3,650 (including taxes and one year of insurance). That’s triple the cost of conventional Lasik.

In the end, I decided to trust my optometrist. She told me that my low prescription, tiny astigmatism, thick corneas, and smaller-sized pupils made me a good candidate for the conventional procedure. However, had I known there was a 97% success rate for 20/20 vision with the wavefront surgery (as opposed to 89% with standard Lasik), I may have made a different choice. Full of doubt, I would have paid more for a guarantee.

But that’s part of the problem, says Rocha. People want guarantees when there are none, and this need for assurances is exacerbated by an industry that can gloss over medical concerns. “Promising 20/20 vision, is not appropriate,” says Rocha. The FDA agrees, cautioning people to “be wary” of centres that advertise 20/20 vision or your money back. “There are never any guarantees in medicine,” writes the FDA on its website, “and even the best-screened patients under the care of the most skilled surgeons can experience serious complications.”

Instead, Rocha suggests looking for a specialist who has a good, long-term reputation. “You don’t have to be a cornea surgeon specialist,” says Rocha, “but it helps.” Also, look for a centre that doesn’t rely on salespeople to talk up the benefits, but focuses more on educating you. Saving $1,000 is great—unless you’re in the 1% of patients who end up permanently damaged from their laser-eye surgery.

The bottom-line, says Rocha, is that price is only a small part of the decision—and it’s one you can’t make with 20/20 hindsight.