Try these strategies to keep your next family trip on budget, plus make the time you’ll spend in airports and planes as meltdown-free as possible. 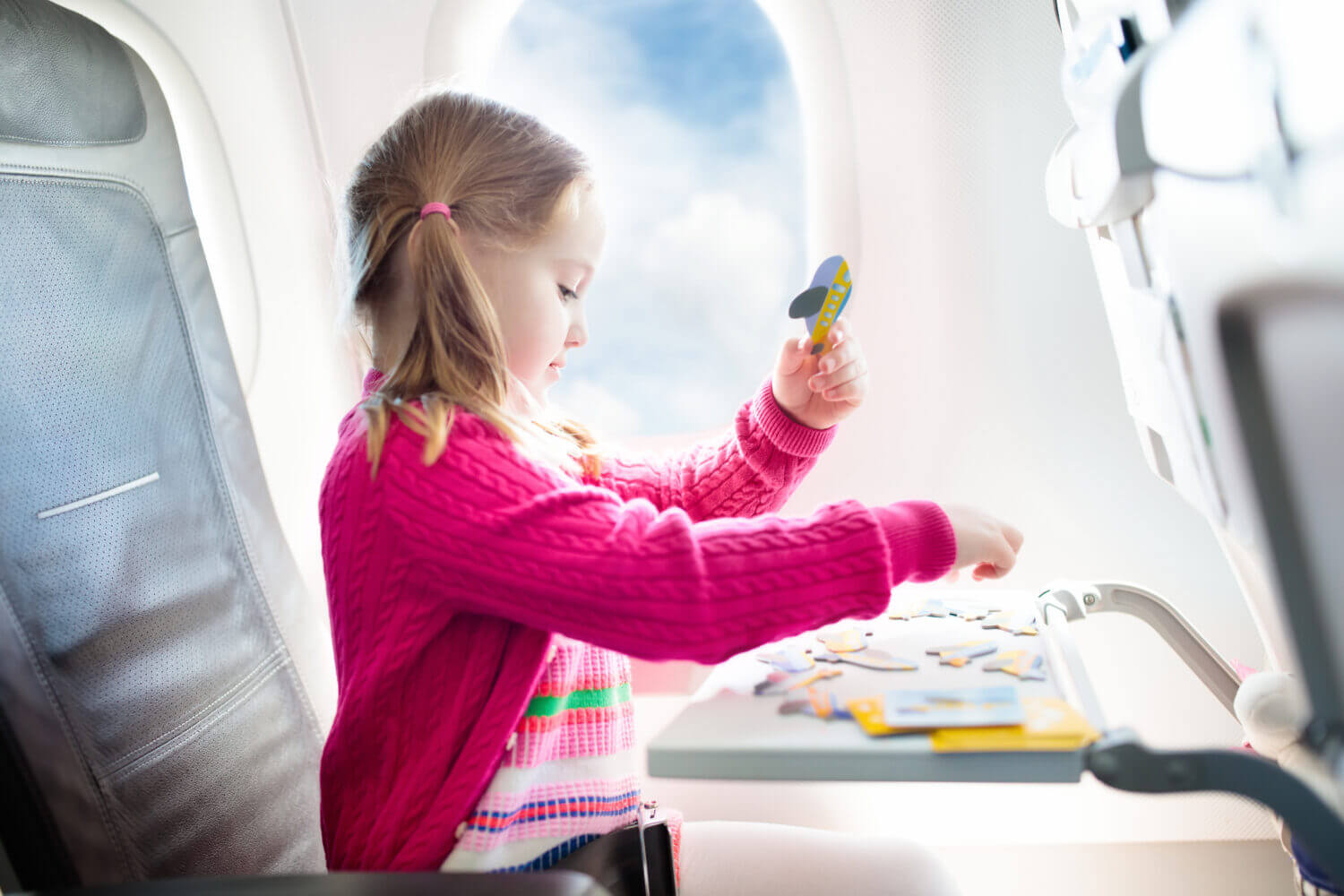 Air travel with young children can be a nerve-wracking experience—even when they’re your own. Not only do I not know how my daughter’s going to react on a flight (will there be tears, unbridled hunger, over-tiredness?), but I’m still getting used to paying for the additional seat; every trip now costs 50% more in airfare than it did for just my wife and myself.

Obviously, I’m not the only parent out there who knows this struggle, but I’ve quickly found some ways to save money and my sanity when going abroad. Here are 10 tips to help you survive your next flight as a family—without breaking the bank.

1. Use a companion voucher

One benefit that many Canadians don’t know about is the companion voucher that comes with select credit cards. The way it works is the primary cardholder pays full fare and the companion pays a set base fare, plus any applicable taxes and fees.

If you’re a family of four, each parent could get one of these credit cards, allowing you to use the companion voucher for each of your two children. The amount of money you save depends on where you’re flying, but as an example, a family flying from Winnipeg to Orlando could easily save $1,000 or more when using the WestJet companion vouchers.

2. Pay for your seat assignments

As of December 15, 2019, the Air Passenger Protection Regulations require airlines to seat children under the age of 14 near to their parent, guardian or tutor at no extra charge, but it’s a little more complicated than it should be. The rules state that children aged five to 11 can be separated from their parents by one seat, while those aged 12 and 13 can’t be more than a row away. Those under the age of 5 must be adjacent to their parent. To avoid being placed away from your children, pay for your seat assignments so you’re assured of getting the seats you want. Note that if you’re booking flights via an Aeroplan reward, your seat selections are free.

3. Know the rules about food

According to the Government of Canada, if you’re travelling with a baby under the age of two, you’re allowed to bring baby food, breast milk, formula, medications, milk, water and juice onto your flight. They need to be in “reasonable amounts,” so packaged items such as applesauce and pureed food packs are ideal. By planning your child’s food in advance, you can avoid paying high prices at the airport.

4. Book during the off season

If you’re able to pull your kids out of school, you can save big during the spring or fall when flights and hotels are typically 25% cheaper compared to March Break and peak summer months. If taking them out of class isn’t an option, you’ll still want to pay attention to airfare and tour operators a season or two before your intended departure date since that’s when they typically have sales.

5. Watch for airline and all-inclusive deals for kids

In case you didn’t know, children under the age of two fly for free when they sit on a parent’s lap, but you may still need to pay taxes or a surcharge. Once your child hits 24 months, though, you don’t necessarily need to pay full price. British Airways, Scandinavian Airlines, Southwest, Virgin Atlantic and Air Tahiti have offered promotions where kids fly free (taxes still apply) when accompanied by a paying adult. I don’t recall any Canadian airlines offering these kinds of deals, but I have seen promotions from Air Canada Vacations and Sunwing where kids stay free if you’re going the all-inclusive route. Ask what’s available before you book.

6. Bring something new to keep the kids busy

I don’t know about your kids, but my daughter loves new things. To keep her still on the plane, I’ll visit the dollar store and pick up some stickers, colouring books, toys and snacks. This strategy usually allows me to keep her busy for about half the flight and it won’t cost me more than $10. That’s a win for me and the passengers sitting nearby.

Checking baggage is becoming increasingly expensive, and a family of four could easily spend more than $200 if everyone checked a bag. To get around this, consider packing carry-on only—and make sure you know the rules. When travelling, airlines typically allow you to carry one standard article (carry-on bag, roller bag, etc.) and one personal item. What many people don’t realize is that a personal item could include a backpack, duffle bag or even a large purse, which gives you more space to store your stuff. Strollers don’t count as a standard article or personal item, so you can check them for free without worry.

8. Shop via Aeroplan or the Air Miles store

If you collect Aeroplan or Air Miles, then you want to get into the habit of shopping via their online stores. Both stores have more than 100 partners, including major retailers such as Amazon, Sephora, Hudson’s Bay, Indigo and others. By going through the online stores, you’ll be able to earn Miles on all your purchases. Had you gone directly to those merchants, you wouldn’t earn any additional Aeroplan or Air Miles. The idea is to accumulate Miles whenever you can so you can use them later for cheaper airfare.

Even if you don’t travel to the U.S. on a regular basis, getting a NEXUS card for your entire family is worth the trouble, since it gives you access to priority lines at every major Canadian airport. Regardless of where you’re returning from, you can use your NEXUS card to quickly get through customs. Not having to stand in long lines will make the kids less cranky and the travel day slightly more enjoyable. The cost is just $50 (U.S.) for five years, so it’s not expensive—it just takes time to get your application processed and to receive the actual card, generally from three to five months.

10. Let your children play in the airport

Many people wait with their kids by their gate for hours, but there’s really no reason to. Take your kids to a quiet area where they can run around and tire themselves out. Many airports, including Vancouver, Toronto Pearson, Boston, Baltimore and Chicago, have children’s play areas that are great for the little ones. If your kids are older, there’s the butterfly garden in Singapore’s airport, a museum at Amsterdam’s Schipol airport and even a movie theatre in Seoul’s airport. Be sure to set an alarm to give yourselves enough time to get to your gate, as boarding typically starts 30 minutes before takeoff.