Community bonds are interest-bearing bonds intended for small scale, non-accredited investors and can only be issued by a non-profit organization. But are they right for you? 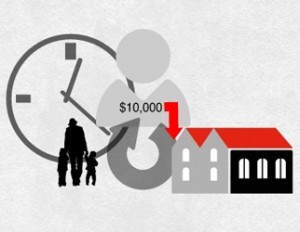 Today’s low interest rate environment combined with a growing appetite for socially responsible investments (SRI) are propelling community bonds into the spotlight. Just this week, reports that Goldman Sachs is getting into the business of “social impact” or community bonds surfaced. But what is a community bond exactly and is it right for you?

MoneySense went to Scott Hughes, principal of CapacityBuild Consulting Inc., to find out. Hughes helped structure the Centre for Social Innovation’s first community bond offering which raised more than $2 million to help buy and restore a downtown Toronto building. Known as the CSI Annex, the property is now a work and event space for a number of local community groups.

Community bonds are “a combination of financial and social returns” that satisfy investor appetite and the funding requirements of a specific cause, Hughes said. The interest-bearing bonds are intended for small scale, non-accredited investors and can only be issued by a non-profit organization.

How did CSI do it?

To raise $2 million, CSI sold a series of $10,000 bonds to investors paying 4% interest for five years, with interest calculated semi-annually and principal and interest paid upon maturity. If all goes well, investors can expect to get back roughly $12,190 after five years before tax.

Investors had the option of buying the bond directly from CSI or via a Self-Directed Registered Retirement Savings Plan (facilitated by Concentra Financial). Concentra Financial acted as administrator providing a liaison between CSI and investors who either committed new funds or reassigned existing funds to their SDRRSP for the bond. The SDRRSP route also provided investors the opportunity to generate an income tax deduction and there’s the added bonus of not having to worry about imputed interest creating additional tax liability. 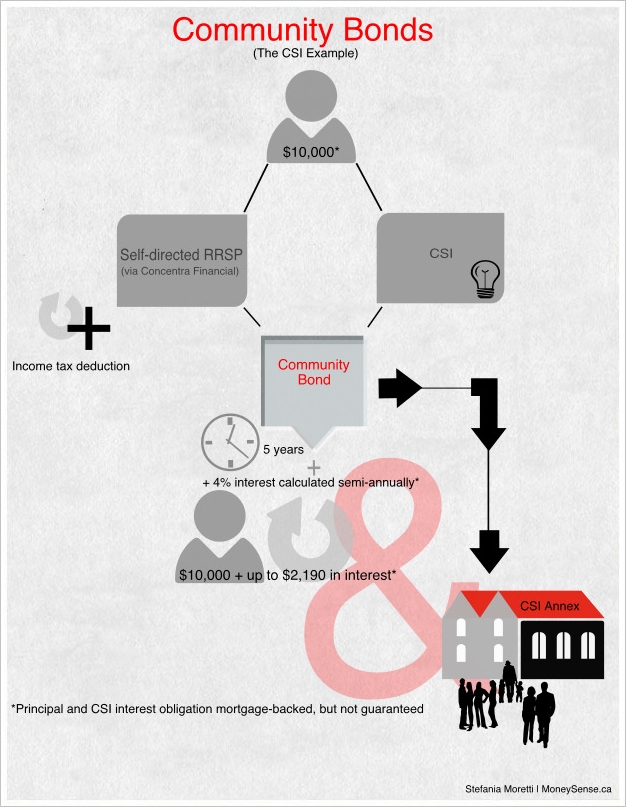 The bonds are mortgage-backed so if CSI reneges on its commitments, the property will be sold with bondholders getting a cut of the proceeds after all other lien-holders (like the bank and city) are paid off.

The bonds are mortgaged-back but not guaranteed. There’s a difference, Hughes said.

“There’s no guarantee, this is an investment like so many others.” The CSI bond has never been rated by a ratings agency.

As a non-profit, CSI is unable to record net income in back-to-back years. The plan is to pay the interest using money generated by their many leasing agreements among other revenue streams.

“There is a risk-return ratio at work in the investing world,” Hughes said. There’s little assurance beyond CSI running an acceptable operation, which they have done for many years, and the slight possibility of loss always remains.

The fact that the government backed the first mortgage on the property is reassuring, said Jason Heath, CFP and managing director at Objective Financial Planners Inc.

“It takes away a little of the concern about risk I might have as an investor.”

“The interest rate that it’s paying is definitely below what market value would otherwise dictate,” he said. From a strictly financial standpoint, the market would’ve demanded more like 8% on those bonds.

“To a certain extent the investor is making a financial investment but they are also making a donation to the cause by way of the lower rate that they are accepting.”

Still, in today’s low interest rate environment with banks and government offering little more than 1% return on guaranteed investments, 4% is nothing to sneeze at.

For some investors, 4% interest is not worth the risk. For others, the social benefit alone is reason enough to have someone else hold onto their money. Somewhere in the middle, are those for whom the cocktail of investment returns plus social enrichment are just right.

“You never know what that perfect balance is until you take a product to market,” Hughes said.

CSI’s community bond may not have been the first of its kind in Canada (private schools and registered charities have traditionally offered bonds to their immediate communities) but it has captured the attention of other non-profits. CSI has since published a how-to guide on community bonds for similar organizations and Hughes is currently working on a white paper focused on community bonds in conjunction with Vancity credit union due out later this fall.

“There’s a lot of interest from non-profits but it’s still mostly conceptual,” he said.

Only a handful of Heath’s clients have expressed interest in socially responsible investments despite the vast array products on the market that promise to avoid alcohol, tobacco and weapons companies.

“Hopefully in time it will become something people are more conscious of,” Heath said, adding that community bonds are unlikely to get as much attention as “ethical funds” since advisers don’t get commissions or referral fees on community bonds and many institutions aren’t comfortable holding mortgages and private companies within RRSPs.

“It’s not likely the sort of thing that an investment adviser is going to get behind…it’s really upon the individual.”