Being hooked on debt has long-term consequences

Hooked on debt. It’s an apt description for the rising debt-to-income levels currently seen in Canada and a new survey by Manulife Bank highlights there’s a high price to our debt dependency—a cost that goes far beyond the low interest rates you see posted online.

Impact on those approaching retirement

One of the biggest contributors to our increased debt-load are rising housing costs. These increased shelter costs make it far more difficult for homeowners to balance paying down their mortgage, while saving for retirement and managing day-to-day expenses, explains Rick Lunny, president and CEO of Manulife Bank of Canada.

According to the new Manulife Bank Canada survey, 37% of homeowners were “caught short” at least once in the past year—meaning they didn’t have enough money to cover their expenses. Worse, only 40% of Canadians are confident that they are saving enough for retirement. “For many, not saving enough means relying on their home equity as a significant portion of their retirement package,” says Lunny.

According to the new Manulife Bank Canada survey, more than a quarter of homeowners predict their home equity will comprise 80% or more of their household wealth at the time they retire—and almost a quarter of those surveyed were already in their fifties. This information is supported by numbers from Statistics Canada information, which shows half of Canadian homeowners aged 50 to 59 still have mortgage debt, though that number drops to 25% between ages 60 to 69. 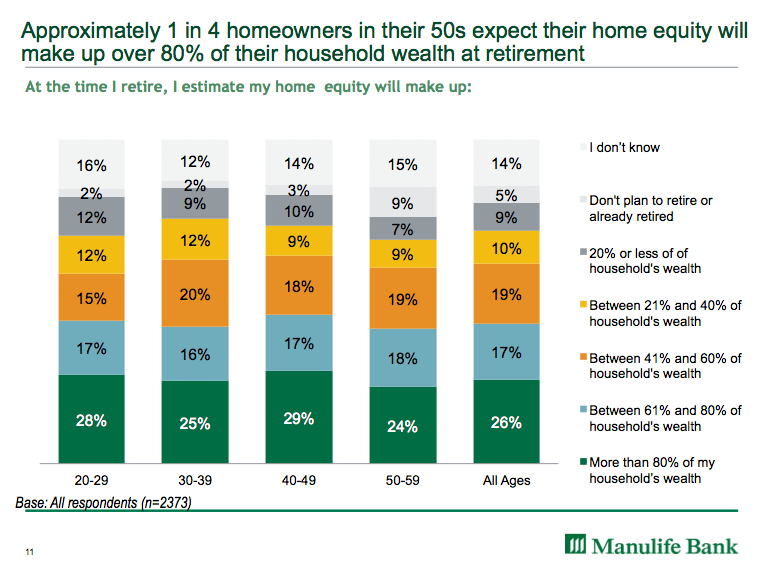 “Our research has consistently found that becoming debt-free is among the top financial priorities for Canadian homeowners, says Lunny. But with stretched budgets and rising housing costs, these homeowners must find a balance between debt repayment and saving for retirement. “So they don’t end up house-rich and asset poor,” says Lunny.

Why? Because increased debt means some potentially difficult decisions, says Lunny. Those with significant equity in their home and insufficient retirement funds could opt to: retire later than originally planned, accept a lower standard of living in retirement, downsize to a less expensive home, or borrow against their home equity to pay bills and fund their retirement.

Appreciating home values may explain why some Canadians aren’t able to weather major expenses. The housing market has been a major driver of economic growth across the country in the last decade and this nurtured consumer confidence in taking on household debt. But this appears to be coming at the expense of retirement savings and even debt repayment.

According to the Manulife Bank survey, 11% of Canadians reduced the amount they saved (mainly because of the recent weaker loonie), while 7% reduced their debt repayments.

Yet, to plan for retirement, most financial planners suggest saving a nest egg large enough to provide you 70% of your pre-retirement income during your retirement years. But this classic advice assumes that other expenses, such as a mortgage, are already paid off.

That might be hard if Canadians not only stop saving for retirement but neglect to pay off their mortgage and other debts. 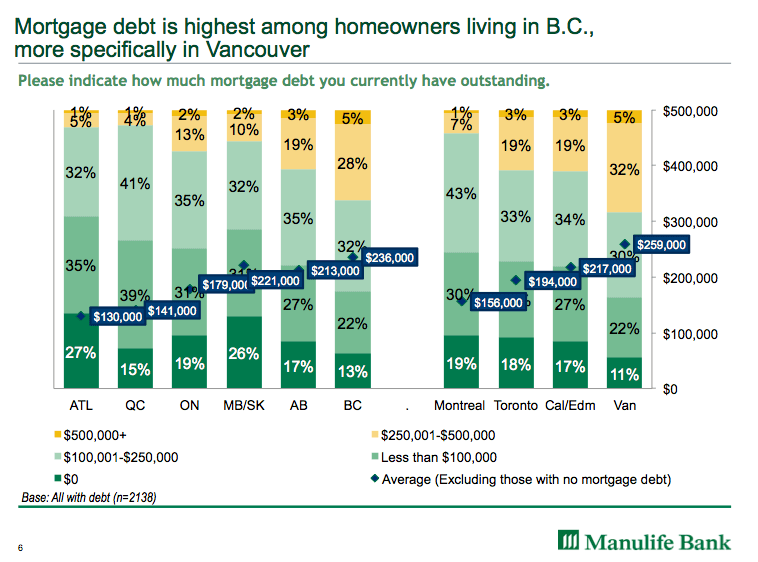 “When you look at why people struggle to make a mortgage payment it almost always comes down to income. It could be a loss of a job, a pregnancy leave, a temporary disability or illness, but whatever the reason, people need to develop a budget and a spending plan that enables them to plan for periods with a reduced income,” says Lunny.

“The best option is to work with an advisor to get a plan in place well before retirement to balance debt repayment, retirement savings and day-to-day spending,” says Lunny.

Why you should cash out your emergency fund »

Why you may not need an emergency fund »

How much will you need to retire? »
Read more from Romana King at Home Owner on Facebook »