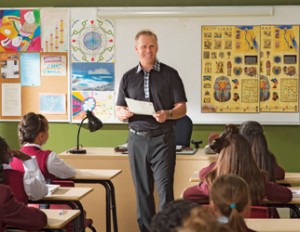 Growing up, I never really had much to learn about money. Mom and dad never had it and I never had it. To me, having money was all about how many credit cards and loans you could get. That’s what I saw my parents do their entire lives, struggling for so many years just to get by. Even when I graduated from university (all seven years of it), I still had no sense of worry about my financial situation. I just always felt I would be better off than my parents were. It was all relative to me.

So, as I embarked on life after school, I applied for credit cards and loans and lived day to day. I never really stressed about money, even in times when I didn’t actually have much. I always felt there was a way to move things around, take a cash advance or just delay payments to get by. Not a fun way to live. It meant debt collectors, depositing cheques on a Friday before the money came out on a Monday, or just plain doing without.

But things started to change for me in my mid- to late 20s when I realized that your credit can max out. Suddenly, what was coming in wasn’t matching what was going out and there was no more borrowing money or delaying payments. This was in 1995 when I was living off a starting teacher’s salary of about $41,000—and carrying $70,000 in debt from school, credit cards and loans. I was at a stage in my life where the thought of owning a house and having a family started to enter my mind. However, it didn’t seem possible. Reality hit me like a ton of bricks. Instantly.

This was the turning point when I decided I needed to kick things into high gear and start working towards financial freedom. I had begun meeting more people in my life who had nice things: cottages, boats, cars. Things I never had but always felt I would want. As kids we all say things like, “I want a house with a pool” or “a place in Florida.” Not once, in saying these things to myself, did I ever think about how to do it.

Until 1996. Money rarely comes to you. You have to go to it. And that’s what I did. I started a second job as a waiter and I began getting involved in a hockey school. A typical day for me was: teach until about 5 p.m., drive to an arena anywhere from one to 40 kms away to instruct for an hour (and make $15), then head to work at the bar until 3 a.m. I did this for three years. It was tiring.

But slowly, very slowly, I started to chip away at my debt. No chunks, just chips. It wasn’t enough. I had lived outside of my means for too long and needed to up the stakes. On the $60,000 or so I was making there was no chance of ever owning property, let alone one with a pool. I eventually dropped the bar job because the hours were too long. Instead, I increased my involvement in coaching hockey. It started to pay off more.

It was early in 1999 when I decided to try stand-up comedy. It was something I always wanted to do. I never thought about the money side of it at all. But I always felt if I could get really good at it, the money would come. It became my obsession. Between teaching, hockey and comedy, 1999 to 2003 was a very busy time for me. However, I loved all three things I was doing, which made it more exciting. Then I had a decision to make: pursue comedy or pursue teaching and coaching hockey. I felt I had reached a stage in my stand-up comedy career where I could take a leave from my other jobs for one year. I had actually paid off all my debts, bought a condo and saved some money.

So I went to Los Angeles, and stayed there for a year and a half before returning home. I was now at a point in my comedy career where I was making just over $100,000 annually. Most of it was from corporate work. I then made the decision to leave teaching for good and devote all my time and energy to acting and comedy.

Now, I have no financial worries. It’s nice that I finally have some disposable income and enjoy some of the material things in life. But I am so aware of the importance of being generous with my good fortune—those are the values my parents taught me growing up. Still, my motivation in life was to get out of debt and acquire things they, nor I, ever had. I’m glad I now have enough money that my kids will be set for life, even though I sometimes worry: what will motivate them?

I hear people say money isn’t everything—and it’s not. But it’s still very, very important. The best financial lesson I had was not having any. Money wasn’t going to come to me. So I went to it.