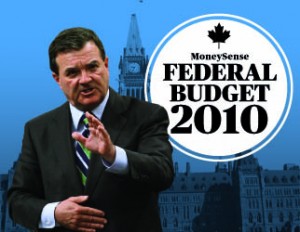 Budget 2010 had to walk a fine line between deficit control and economic stimulus, but Finance Minister Jim Flaherty hasn’t reneged on his 2009 promise to deliver $3.2 billion in personal income tax relief.

The continued relief — resulting from changes to tax-bracket thresholds, the basic personal exemption and other items in the 2009 budget —  is welcome news to families, and, with the notable exception of the renovation tax credit, concessions granted to families and individuals in previous budgets (such as the First-Time Home Buyers’ Credit) have emerged unscathed.

To begin taming the deficit, the budget proposes a number of initiatives aimed at closing tax loopholes. Many of them apply to businesses but there is some spill over to individual taxpayers — especially, as noted below, those dealing with the medical expense tax credit and employee stock option plans.

The government plans to amend the Registered Disability Savings Plan (RDSP) . The rules allowing the rollover of a deceased individual’s Registered Retirement Savings Plan (RRSP) to a surviving spouse (or to a financially dependent child or grandchild) were extended to permit RRSP rollovers to RDSPs of financially dependent and infirm children or grandchildren. The measure will come into effect for deaths on, or after, March 4, 2010 (for deaths after 2007 and before 2011 special transitional rules will permit an equivalent result). The Department of Finance estimates this revision will save Canadians $20 million in taxes over five years.

Annual contributions to RDSPs attract Canadian Disability Savings Grants (CDSGs) and Canada Disability Savings Bonds (CDSBs). “In recognition of the fact that families with disabilities may not be able to contribute regularly to their plans, Budget 2010 proposes to … allow a 10-year carry forward of CDSG and CDSB entitlements,” the budget document says. Tax savings will likely total $175 million over five years, according to the government.

A single parent can end up paying more tax on Universal Child Care Benefit (UCCB) amounts than a single-income, two-parent family at the same level of income (the UCCB is included in the income of the lower-income parent). To remedy this situation, the single parent will be given the option of including UCCB amounts in the parent’s income or the income of the dependent (starting in 2010).  Tax savings are estimated at $20 million over five years.

Under current rules, the UCCB and Child Tax Benefit (CTB) are paid to one eligible parent. The same goes for child-related GST/HST credits. In the case of parents who share custody of a child, both parents will be eligible to receive these benefits and credits.

Purely cosmetic procedures are to become ineligible for the Medical Expense Tax Credit (METC) after March 4, 2010. Procedures included are: liposuction, hair replacement, botulinum toxin injections and teeth whitening. An exception is made for a deformity arising from an accident, disease or congenital abnormality. This amendment is expected to save the government $200 million over the next five years.

Changes, effective after 4:00 pm (EST) on March 4, to the tax treatment of employee stock option plans are one of the more significant in terms of fiscal impact. The Department of Finance expects to recoup more than $1.5 billion in taxes over the next five years.

Many employees acquire shares in their employer through a stock option plan. Differences in the fair market value and the amount paid by the employee on option exercise are deemed taxable employment benefits. Under certain conditions, the employee is entitled to deduct one-half of the benefit.

However, depending on how stock option agreements are structured, the company may also claim a deduction. The budget proposes to prevent both parties from claiming such deductions – with the deduction generally being available only to employees. Thus, there could be some implications for the number and extent of stock-option plans in Canada.

Income tax rules are also to be rewritten to clarify another issue in connection with stock options. The clarification is to confirm that the disposition of rights under a stock option agreement to a non-arm’s length person will result in an employment benefit.

Presently, the employment benefit created by the exercise of stock options can be deferred until the stock is sold. This may give rise to situations where the sale does not generate sufficient proceeds to pay taxes due; indeed, instances of financial hardship have arisen.

“Budget 2010 proposes to repeal the tax deferral election and to clarify existing withholding requirements” to ensure tax is remitted by the employer. But for those who have previously experienced financial difficulties as a result of the tax-deferral election, there is special relief. The special elective treatment will ensure that the tax liability does not exceed the proceeds obtained from disposing the optioned securities.

Budget 2010 introduces further measures to make the Canadian financial sector stronger and more competitive. They include:

Other measures in the budget: