Giving up the dual income life can be tough, but it is still possible if your goal is to spend more time at home with the kids. Here's how you do it. 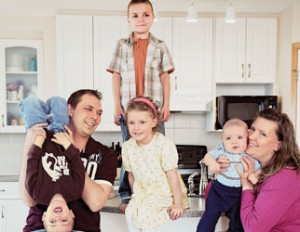 Does the notion of staying at home with the kids appeal to you? While the lifestyle has lost some of its mainstream charm, it’s still an achievable goal. But it takes careful planning and some drastic budget cutting.

Karen Collacutt, a CFP with Money Coaches Canada, says most families have to make some major sacrifices to live off a single income. “It’s a tradeoff,” she says. “You get the freedom to have a parent at home, but you’re trading off the income potential.” Her single-income clients have had to cut back on travel, postpone renovations, forego gym memberships, and more. It’s the lifestyle stuff that gets cut first, she says.

While the family model where one parent stays home seems dated and out of reach today, it wasn’t that long ago when it was the norm. The rise of duel income families only picked up steam in the mid-70s as more women decided to give up the notion of being a stay-at-home parent. According to Statistics Canada, the percentage of women 15 years of age and over who participate in the workforce jumped from 45.7% in 1976 to 61.8% in 2005.

Don Macfarlane, a CFP based in Thornhill, Ont, says living off one income was much easier to do 30 years ago. When his wife decided to stay home in the 1970s they had to give up a second car and vacations. It also meant staying in their current home while Macfarlane’s peers upgraded. He believes it would be even tougher now to make ends meet on one salary today.

Of course, it’s one thing to cut vacations and renovations; it’s another to sacrifice savings. For the seven years that Macfarlane’s family lived off one income, he didn’t contribute a dime to his RRSP. “You can’t save for that period of time,” he says. “There’s always something that comes up, so the RRSP gets pushed down quite low on the list.”

If you’re prepared to live a one-income lifestyle, then the first thing you need to do is come up with a plan. A lot of people end up scrambling and accumulating debt, says Collacutt. What you need to do is count every dollar you spend and figure out how much money is coming in versus going out. Then take away one income and start cutting, she says. “The initial work is about crunching numbers.”

Once you decide which expenses to reduce, she suggests trying to live off one income while still bringing in two. Not only will that give you a chance to see if you can survive on a single salary, but you’ll have built up a cash cushion in case something happens down the road.

Collacutt also recommends paying off any credit card or line of credit debt before reducing the household revenues. “If you’re servicing debt it’ll be way hard to get down to one income,” she says. “Many people are spending a good chunk of their family’s (two) incomes on debt.”

Smart tax planning is also important. Families should always look for ways to drop the income earner into a lower tax bracket. One credit people in this situation should claim is the spousal tax credit, says Doug Carroll, vice-president of tax and estate planning at Invesco. The tax credit reduces the income of the working spouse by about $1,700, he says.

For more long-term planning, consider saving in a spousal RRSP and then withdrawing from it if money gets tight. The higher income earner would contribute to the account and get the tax break from the government. Two years later the stay-at-home spouse can withdraw that money and pay little to no tax.

While working off one income is doable, the more money you make the easier it is. Collacutt says living off one salary will be a challenge for a family that brings in less than $80,000 a year. It’s also harder if the income that’s getting cut is substantial. “It’s not about what income you have left, it’s about what you lose,” she says. It’s also more difficult to do if you live in an expensive city like Toronto or Vancouver.

While some families can make it work and stick to it, Collacutt says a lot of people find it too difficult and have to return to a dual-income home.

Still, despite missing out on seven years of savings and a larger house, Macfarlane says he’d do it all over again. The feedback Collacutt’s received from her clients echos that sentiment. “Most people say it’s the right choice and they’re happy about it,” she says. “They’re willing to make sacrifices and also shift their mindset around what’s key, like being with family. Spending money on outside activities becomes a lot less important.”