Can currency-hedged ETFs protect you?

Your foreign equity holdings are likely getting smacked by the recent surge in the Canadian dollar, but before you buy currency-hedged ETFs you'll want to read this first 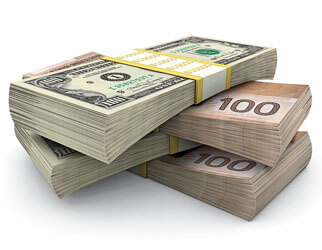 If your summer plans include travel in the U.S. you’ve no doubt noticed that buying our neighbour’s currency has become a lot cheaper in the last couple of months. In early May, a loonie was worth about $0.73 USD, but as of late July it could buy you 80 shiny Lincoln pennies. That’s an increase of about 10% in less than three months.

A rising Canadian dollar is good news for snowbirds and importers, but if you hold foreign equities in your portfolio, you’ve taken a hit. Although U.S. stocks have risen in value in their native currency over that period, U.S. equity index funds saw negative returns when measured in Canadian dollars. You’ve probably also noticed some variation in the value of your international equity holdings as our dollar has experienced some wild swings in most overseas currencies over the past six months.

Any time a rising Canadian dollar takes a bite out of foreign stock returns investors can feel tempted to use ETFs and index funds that employ currency hedging, a strategy designed to protect you from the effects of a decline in the U.S. dollar and other foreign currencies. These days many U.S. and international equity ETFs are available with or without currency hedging. So which type should you choose?

We should begin with a refresher abut how currency fluctuations affect your returns. When you buy an ETF that holds foreign equities, you’re taking on two different risks. The first comes simply from owning stocks, which of course can go up or down in price. The second risk is less obvious: you’re exposed to the currency in which the stocks are denominated. So if you hold U.S. stocks and the greenback rises in value relative to the loonie, you get a boost in returns. On the flipside, if the loonie rises and the U.S. dollar falls—as it has in recent months—your returns will suffer.

That’s the reasoning behind currency hedging: it’s designed to eliminate that second risk by removing the effect of fluctuating exchange rates. ETFs using this strategy employ instruments called currency forwards, which allow them to lock in a specific exchange rate on a future date. If the foreign currency has declined by the time that date rolls around, the fund will enjoy a gain on the value of the forward contract. If the foreign currency rises, the value of the contract goes down by a similar amount. The net result, then, is that the impact of exchange rate gets washed out. The only risk that remains comes from the stocks themselves.

Why the loonie shot higher. And what it means for you »

What about the long game?

There is no question currency hedging will work in your favour during many periods, even some lasting many years. The most dramatic example comes from early 2002 to late 2007, when the Canadian dollar soared from $0.62 USD to almost $1.09 USD, punishing investors who held U.S. equity funds without currency hedging. But as a long-term strategy, I believe Canadian investors should use unhedged index funds for their U.S. and international equities. Here’s why:

The iShares Core S&P 500 Index ETF (CAD-Hedged), for example, should be expected to deliver a return very close to that of the S&P 500 in U.S. dollars. But over the 12 months ending June 30, the index returned 17.9%, but the fund returned just 16.9%. Fees and taxes explain part of that shortfall, but not the whole one percentage point difference, which can seriously erode long-term returns. Funds that do not use hedging strategies tend to track their indexes more closely.

Unhedged portfolios are less volatile. It’s misleading to say hedging strategies “eliminate currency risk,” because this implies that non-hedged ETFs are more risky. In fact, there’s evidence that adding currency diversification actually lowers the volatility of a portfolio—at least for Canadian investors. That’s because the U.S. dollar has some negative correlation with the global stock market: during periods of falling stock prices, many investors see the U.S. dollar as a safe haven, which drives up its value.

The smart money tends to agree. The Canada Pension Plan, for example, holds billions in foreign assets and does not use currency hedging. “While currency exchange rate fluctuations may have a significant impact on our results in any given year or quarter,” the CPP Investment Board writes in a recent report, “we do not expect them to have a significant impact on the Fund’s long-term performance.”

If you could get the timing right this would work brilliantly. Unfortunately, reliably predicting currency movements is futile, so you’ll end up starting a cycle of guessing games. And if you’re switching back and forth between ETFs in a non-registered account you may find taxes eat up your gains even if you guess right.

As always, it pays to settle on a long-term strategy and stick to it even if it occasionally suffers over shorter periods. Leave your investment portfolio alone and enjoy the other effect of a rising loonie: that cross-border shopping trip just got a lot cheaper.