Stocks bounced back from last week's bond scare; inside Warren Buffett's annual investor letter; why a quick U.S. vaccine rollout might also be good for Canadian markets; and more. 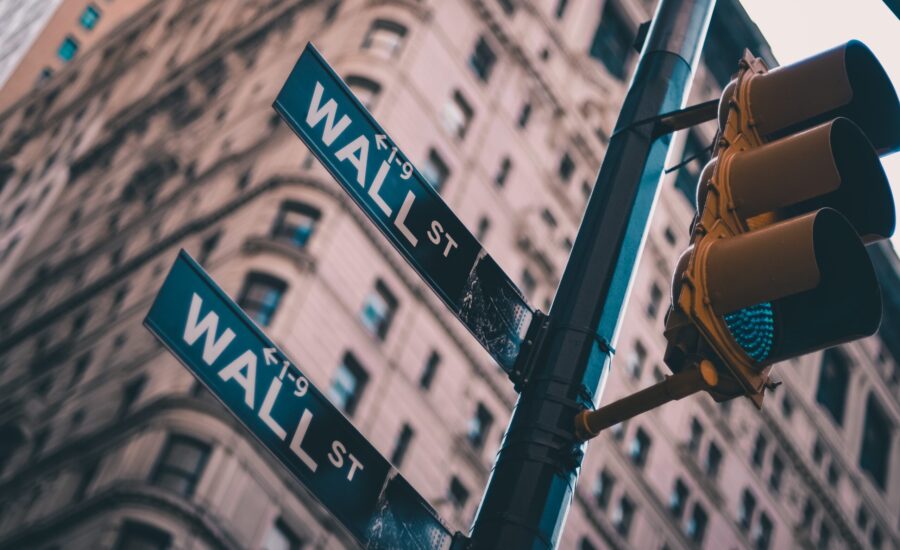 Photo by lo lo on Unsplash

By March 1, the bond scare appeared to be over, stocks were back to their habit of moving higher. In fact, on Monday the S&P 500 had its best day since June.

It appears to be a game of cat and mouse—one the markets are still trying to figure this out. A stronger economy is good right? Well no, wait a minute, that economic growth might eventually lead to higher inflation and higher bond yields that hurt stocks. Inflation is scary and real—and lasting inflation, we hardly know ya. It’s been a while since we’ve seen real inflation. That is a U.S. link, but Canada largely will follow those trends.

Last week, I covered how those bonds are a threat to stocks. Are we really in store for a continued and meaningful rise in rates? Of course,  that’s not good for bond investors as higher rates leads to lower bond prices (there is an inverse relationship between the two).

I truly enjoy being an armchair economist and lately have spent too much time investigating this topic of inflation and rates. One of the most reputable voices on the subject is Lacy Hunt, an economist and executive vice-president of Hoisington Investment Management Company. This is an incredible post from August of 2020, on BNN Bloomberg.

“The technological changes today are more evolutionary, not revolutionary. The production function is one of the most fundamental relationships in all of economics, and it’s telling us we’re facing a period of difficult growth. Given these other circumstances, it’s going to be one in which the inflation rate is going to be trending down, possibly at a much greater risk of deflation than inflation.”

“We may see prices moving up, but not staying up. We see global disinflationary pressures and they are not going to go away overnight.”

I am not going to argue with that basic framework. Those two sources are somewhat in agreement on the general theme. And from my collective research, I formed the same opinion that we might see a “burst of inflation” and then return to that disinflationary slow growth. Hunt and others have pointed out that excessive government borrowing creates an additional slow growth effect over time.

The markets did not like Chairman Powell’s comments. Both the stock and bond markets took an initial hit.

And it has been a choppy week. Stocks went negative on Wednesday and continued to slide on Thursday, March 4. The stock and bond markets don’t know which way to turn with respect to this inflation and bonds issues.

In February and on the ETF front, U.S. investors were setting records. From that Bloomberg post…

“‘Investor psychology has shown a bias toward optimism,’ said Keith Buchanan, portfolio manager for GLOBALT Investments in Atlanta. ‘The animal spirits, if you will, are and have been at play in the past 11 months in this rally. There’s a lot of liquidity still out there, and it has found a home’.”

Keep in mind, no one knows what will happen with inflation or rates. We should not invest based on guesses, but we might be prepared for the range of possibilities and economic conditions.

Many investors can’t wait to get their eyes on the annual Warren Buffett Letter. In each edition, the world’s greatest investor offers his thoughts on the stock markets, the economy, his own company Berkshire Hathaway and more.

Here’s the link to the 2020 Buffett Letter in PDF format.

In recent years, the letter has opened with a comparison of Berkshire Hathaway returns vs the S&P 500 returns, by year. Buffett and his team have a long-term track record of beating the returns of the market (the S&P 500) by a very large degree. But Berkshire Hathaway stock has lagged the market from the end of the Great Financial Crisis, from 2009. Buffet and his team usually take advantage of serious and prolonged market corrections to buy companies at a discount. They did not get their chance in 2020, as Buffett was not comfortable investing amid all of the uncertainty in the COVID-19 pandemic.

Berkshire Hathaway is still sitting on more than $130 billion in cash and, with the violent market correction over, they are ready to invest. Last year, they largely invested in “themselves” by buying back their own shares on behalf of investors. (We discussed Warren Buffett and the process of buying back shares in this space, back in August 2020.)

For the record, I am one of those investors, having owned Berkshire Hathaway since 2014.

From the recent Warren Buffett Letter…

“Last year we demonstrated our enthusiasm for Berkshire’s spread of properties by repurchasing the equivalent of 80,998 ‘A’ shares, spending $24.7 billion in the process. That action increased your ownership in all of Berkshire’s businesses by 5.2% without requiring you to so much as touch your wallet.”

The letter offers a wonderful demonstration of how an investor can sell shares to generate profits—and, thanks to share buybacks, maintain their ownership of the company’s profits.

“Berkshire’s investment in Apple vividly illustrates the power of repurchases. We began buying Apple stock late in 2016 and by early July 2018, owned slightly more than one billion Apple shares (split-adjusted).… When we finished our purchases in mid-2018, Berkshire’s general account owned 5.2% of Apple. Our cost for that stake was $36 billion. Since then, we have both enjoyed regular dividends, averaging about $775 million annually, and have also—in 2020—pocketed an additional $11 billion by selling a small portion of our position. Despite that sale—voila!—Berkshire now owns 5.4% of Apple.”

I still like our Berkshire Hathaway holding (BRK.B). It’s a market-correction hedge. And, looking at the big picture, it is an investment in the world’s greatest investor, who is holding a massive cash pile. It’s part of our risk-management strategy.

If the company continues to underperform the market, that is fine. That is an accepted “risk.”

Canada’s economy in 2020 was the worst on record

That should not be too much of a surprise, of course. In 2020, we experienced the first modern-day pandemic. The drop for the year was due to the shutdown of large swaths of the economy in March and April during the first wave of the COVID-19 pandemic that crushed the economy.

Since then, economic activity has slowly and steadily grown.

But that low bar set the stage for considerable percentage gains late in the year. From that Advisor’s Edge post, quoting BMO chief economist Douglas Porter…

“‘Look for new growth drivers to kick into gear as the economy re-opens in stages through this year, leading to roughly (six-per-cent) growth—a nice mirror image to last year’s deep dive.… It’s not precisely a V-shaped recovery, but it’s very close’.”

The Bank of Canada has predicted a 2.5% GDP drop in the first quarter of 2021. It’s quite possible that we might beat that cautious prediction, as COVID restrictions are being relaxed in many areas across the country.

Accelerated vaccine delivery is the main driver of economic and investment optimism in Canada. Though any continued slow delivery could be a drag on economic recovery and market performance.

Just a hunch, but barring any black swan event, I think the economy and markets stand a good chance to beat the low bars in the second, third and fourth quarters of 2021.

Canadian stocks are outperforming U.S stocks in 2021, and that might continue.

As you likely know, Canada has lagged the U.S., Britain and other developed nations with respect to national vaccination rates. Scroll down in that CTV link (it’s a very good free vaccine tracker) and you’ll see the global vaccination levels. Canada currently sits at 5.4% (population vaccination rate) and we lag behind more than 50 other developed and developing nations. The U.K. is at 31.8% and the US is at 24%.

The U.S. will likely increase its advantage over Canada: President Joe Biden announced the completion of the  national vaccination program is expected in May.

That’s good news on many fronts. First off, there is extensive vaccine production in the US. Perhaps many of those doses, following the completion of the American program, might head to its neighbours, Mexico and Canada. In fact, Canada also announced (coincidentally?) this week that we may be complete in August, an improvement over recent predictions of September.

We know that small businesses and many sectors have been crushed in the pandemic. Many lower-wage retail and service sector workers have been disproportionately targeted by the pandemic. These sectors may be heading back to work sooner rather than later on both sides of the border. That’s great news on a human scale.

We’re all suffering from pandemic fatigue. We can’t wait to travel, head to the movies and live theatre, and book that restaurant visit with family and friends. We yearn for “experiences.”

Those hard-hit sectors are getting ready to be open for business. The money will flow.

What does that mean for the markets? This all supports the “recovery stocks” theme. And we see an ongoing shift in investor sentiment and money flows.

And with greater and real economic growth comes the greater demand for oil and other commodities. That has been a constant theme mentioned and tracked in this space and, to illustrate, iShares Capped Energy Index ETF XEG is up 29% year-to-date.

I have also opened a position in the Purpose Diversified Real Asset ETF PRA. That is a very good one-stop-shop inflation hedge, IMHO. The ETF offers a diversified portfolio of commodities and equities linked to real assets, uniquely designed to protect against inflation.

And, once again, that threat of economic growth and potential of meaningful inflation puts a scare into stock markets.

Thanks to S&P Global for this playful note, and mention of an important milestone…

“On March 4th 1957, nearly a decade before Bob Dylan, indexing went electric.  Using brand-new technology that meant it could be published every 15 seconds throughout the trading day, Standard and Poor’s index of 500 large-cap stocks offered market participants a new way to keep track of the world’s biggest equity market.  It would go on to offer the foundations for a new breed of ‘passive’ investor, to support the world’s most popular equity future, and to embarrass the vast majority of active stock-pickers over the subsequent decades. Happy Birthday, S&P 500.”