The Conservative government’s newly released federal budget confirmed what many had expected: a plan to raise the OAS program eligibility age in Canada from 65 to 67. 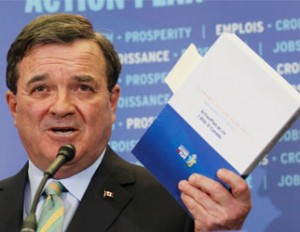 Retirement may be further off than you had planned.

The Conservative government’s newly released federal budget confirmed what many had expected: a plan to gradually raise the Old Age Security (OAS) benefit eligibility age in Canada from 65 to 67 starting in 2023.  But few were expecting a proposal by the Harper government to delay Guaranteed Income Supplement (GIS) payments, reserved for the lowest income seniors, as well.

The changes would not affect anyone 54 years of age or older as of March 31, according to the official release. If you are younger than 54, click here to find out exactly the new eligibility rules affect you.

The controversial measures are aimed at reducing the costs associated with this country’s aging population. The number of OAS recipients will double over the next 20 years as more baby boomers hit their Golden Years and life expectancies climb, according to government estimates.

“Today it is clear we must take action to ensure the sustainability of the Old Age Security program, which is the largest spending program of the federal government,” Flaherty said in his prepared remarks on the budget.

The OAS benefit provides as much as $540.20 monthly to Canadians 65 and older, with higher income seniors getting less. Anyone making more than $112,772 receives no OAS payments. The GIS provides an additional $8,788 for single seniors with incomes below $16,368 and up to $11,655 for senior couples bringing in less than $34,610 excluding OAS payments.

Parliamentary Budget Officer Kevin Page disagrees with the Harper government on the OAS file. He has said the current OAS program is sustainable because the money used to fund benefits comes directly out of general revenues; as the elderly population and economy continue to grow, so too will revenues.

Murray Pituley, a director with Investors Group, said the new retirement age won’t make or break Canadians with a solid financial plan in place since it represents only a portion of a well-rounded retirement fund.

“The changes they’ve made have been done in such a way that it’s going to allow most people to adjust their plan,” he said. It’s worth mentioning that rules around collecting the Canada Pension Plan for instance have not been affected.

But critics, including the University of Ottawa’s Michael Wolfson and Susan Eng, vice-president of advocacy at CARP, say the changes disproportionately affect the most vulnerable Canadians.

“People who have precarious occupations or are in low-income levels are not going to be able to change their circumstances…they aren’t going to be able to suddenly get a better job,” Eng said. The best way to secure the financial future for the next generation is to promote job creation, she added.

Wolfson, former assistant chief statistician at Statistics Canada and former federal adviser on pension policy, said he was “surprised” to see the GIS included in the claw-backs.

Though the government stands to save an estimated $4 billion per year by raising the retirement age to 67, much of the burden will be downloaded onto the provinces who’ll face increased welfare costs, Wolfson said.

“There should be a quid pro quo here that says ‘look a lot of people are going to fall off a cliff when they retire’ and I think the number is about to increase with this proposal.”

Others will have to compensate for the shortfall by working more, withdrawing more from their savings and/or moving in with relatives.

Though Canada is not the first country in recent months to raise its retirement age, it’s still unclear how people will adjust to having to work an extra couple of years, Wolfson said.

“The other question is whether the job market can adapt.”

Wolfson and Pituley both highlighted the new voluntary deferral of the OAS pension as a “plus” for middle- to high-income seniors. Starting July 2013, Canadians will have the option to defer their OAS pension to a later time and receive a higher, actuarially adjusted pension.

The 2012 budget also introduced changes to pensions for government staffers, including MPs and senators. Today, taxpayers fund roughly 60% of public servant pension plans and more of that burden will begin to fall on the shoulders of the employees starting as early as January.

“We will adjust these pension plans to be more in line with those available to Canadians working in the private sector,” Flaherty said.

The document also contains a proposal to increase duty- and tax-free traveller’s exemptions. The value of goods that may be imported duty- and tax-free by Canadians returning from the U.S. and other countries will rise to $200 from $50 and to $800 from $400 for 24-hour and 48-hour absences respectively, starting this June.  The measure is expected to cost federal coffers as much as $13 million in 2012-13 and $17 million in 2013-2014.

For more on the 2012 budget visit Maclean’s.ca.