How expat investors can become millionaires

Canadians living around the world: here's advice for you 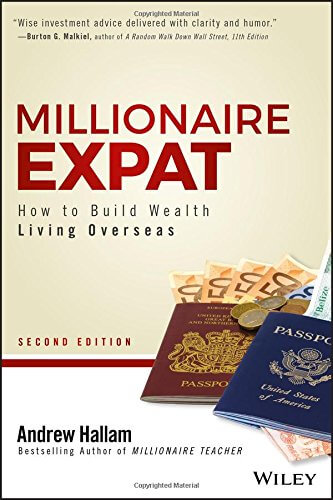 WHO IT’S FOR: Expats or anyone interested in living abroad and building wealth. Author Andrew Hallam knows that expat investors have it tough. Not only do they have to understand the complex logistics of managing their portfolio in overseas accounts, but they may also be preyed upon by shady local advisors.

MORE SPECIFICALLY: Expats who want to learn how to avoid overseas investment traps. Hallam, the author shows you how financial salespeople abroad often slither into expat workplaces. They cold-call you at home. They email you at work. They sell the worst financial products in pursuit of huge commissions. Millionaire Expat shows you how to avoid these traps and is truly a unique and important book.

DOES IT BUST ANY MYTHS?: Yes, that just because you live abroad you likely won’t build enough wealth for retirement. In fact, Hallam shows that by living below your means, investing in a portfolio of low-cost passive index funds, and avoiding those cunning “investment sharks” you can focus on your family and career while still staying on track to a sound financial future.

READ: Do Canadian expats have to pay income tax?

WHAT’S THE COMMON SENSE CONCLUSION?: That by spending just 90 minutes a year on an investment portfolio you can beat most professional investors—whatever country you reside in.

INTERESTING SECTION OF THE BOOK: The final third of the book, which concentrates on specific portfolio advice for expats who come from virtually all over the globe. Those include recommendations for Australians, New Zealanders, Canadians, Americans, Europeans, Asians, South Africans, South Americans and the British. Each chapter gives specific recommendations of which funds to buy to build all three of Hallam’s suggested permanent portfolios which include:

BONUS: For those who prefer not to manage their own investments and instead, want professional advice in putting together their investment portfolios, the book spends an entire chapter on how to recognize “investment advisors with a conscience.”

FAVOURITE QUOTE: “Expats can enjoy the best of both worlds. They can live adventurous (even luxurious) lives and retire wealthy. But they need to save and invest effectively.”

KEY TAKEAWAY: Whichever route you decide to go with your investments. “stick with the plan.”

The man stood naked. His back and butt were clean. But his arms and legs were caked with mud. He held a towel in his left hand as he stood behind his pickup truck. With his right hand, he held a running shoe.

A couple strolled behind him along a grass trail beneath an overcast sky. The walkers looked furtively at the naked man. No, I wasn’t one of the walkers. Nor was I (despite what many of my friends might think) the naked guy behind the truck. It was simply a full-page advertisement for Adidas in Runner’s World magazine. It read, “Runners, Yeah we’re different.”

In 1999, Adidas published a slew of similar ads. They showed the eccentricity of the long-distance runner. Runners might be different. But expats are too. My friend, Catherine Parent, lives in Indonesia. She recently posted a picture of her toothbrush on Facebook. It was in a cup…with a cockroach. Her caption asked, “To brush or not to brush?”

My friend, Debbie Woodfield, lived in Asia for years. The New Zealander posted a photo of a drink menu at a café in Laos. They offered Lao Coffee, Espresso and…. silkworm poo tea.

Expats don’t leave their home countries for giant bugs or poo tea. Most of us just want to experience something different. Some of our friends back home marvel at our bravery, or they think we’ve lost our marbles. But unless you’re living and working in an active war zone, living overseas might be as safe, or safer, than the life you left behind. That said, there is one risk that many expats face. We risk running out of money during retirement.

You might wonder what I’m smoking if you’re on a cushy expat package. After all, there’s a large league of expats in South East Asia and the Middle East who make bucket loads of cash.

They left their home countries to teach at international schools or work abroad in industries such as banking, information technology, oil, cosmetics, pharmaceuticals, and shipping. Many work for firms like Coca-Cola, American Express, Johnson & Johnson, Google, Microsoft and Exxon Mobil.

Not all expats (including millions in Europe) make massive sums money. But even those who do face financial risks.

In 2003, when I left Canada to teach in Singapore, I kissed goodbye to a defined benefit pension. Had I continued with my former job, I could have paid off a home, contributed modestly to investments and received pensionable income for life.

By comparison, most expats run naked. Many don’t realize they would need more than a million dollars in the stock market or multiple mortgage free rental properties just to equal, for example, the retirement benefits earned by most public sector workers in the United States, Britain, Australia or Canada.

Such benefits are globally waning. But they’re still a reality. Governments offer additional monthly cash: Social Security (for Americans), Canadian Pension Plan for Canadians. In fact, most developed world countries offer retirement benefits to their respective home country workers. But it’s different for expats. Few expats contribute to their home country social programs once they’ve moved abroad. Without maximizing contributions to these plans, they can’t fully open their mouths to such morsels once they’ve retired.

One of my former colleagues learned this the hard way. She’s American. But she taught overseas for most of her career, so she contributed little to U.S. Social Security. While working abroad, she earned a lot of money. She furnished her large apartment with fine carpets. She bought beautiful jewelry. She enjoyed flashy holidays–often flying business class to five-star resorts. Unfortunately, she didn’t save much. Today, my friend is back in the United States, renting a room in somebody else’s home. She’s 70 years old and struggling far below the U.S. poverty line. As Warren Buffett says, you only know who’s swimming naked when the tide goes out.

In sharp contrast, I also taught with a couple that retired with about $5 million dollars in their investment account. That’s a lot of money, especially for teachers. They paid for their two daughters to go to college. They own a mortgage-free home. They lived well as expats and retired fully clothed. But they were great planners.

My wife and I were similar. When I first started investing, I wanted to retire at 40. I was 19 years old and saving like a lunatic. I won’t confess the screwy things I did to pinch pennies. Instead, I want to share what I did right: the part you’ll find helpful. I planned how much money I wanted to save, and why. Such planning, even more than the hyperactive saving, made my life a heck of a lot easier.

In 2014, shortly after my 44th birthday, we retired from our Singapore-based teaching jobs. That doesn’t mean we live like trust-funded hedonists. Nor does it mean we’ll never work again. It does mean, however, that our private parts aren’t sitting in somebody else’s vise. A few years back, if our boss had gone on a firing spree, sacking skinny bald guys and bilingual blondes, we would have been fine. We had enough money to survive without working.

We saved and invested in the stock and bond markets–in a manner that I detail in this book. Fortunately, we dodged the armies of silver-tongues who peddle horrible investment products.

Such investment schemes are sold most prolifically to British expats. Expats of every nationality, however, get sucked in. These schemes get pushed like Viagra. But they leave investors limp. Investors pay obscenely high fees. That’s why they rarely make money when the gains (if they exist at all) are adjusted for inflation. The salespeople who sell these schemes make Everest-sized commissions–sometimes totaling more than $1 million a year. That’s why some of these salespeople bribe their current clients. “I’ll offer you a free iPad,” they might say, “if you give me the contact details for ten of your friends.” Victims get locked into ten, twenty, even twenty-five-year schemes.

Once an investor catches on to the fee-burdened riptide, it’s often too late. Those who scramble out of the water face redemption penalties. Some could lose everything if they try to sell early. What’s worse, many overseas employers welcome financial sharks into their company seal pools. With the best of intentions, they endorse offshore pension sellers, most of whom have a single purpose: to reap the highest possible commissions from unwary workers.

But it doesn’t have to be this way. Expats can enjoy the best of both worlds. They can live adventurous (even luxurious) lives and retire wealthy. But they need to save and invest effectively.