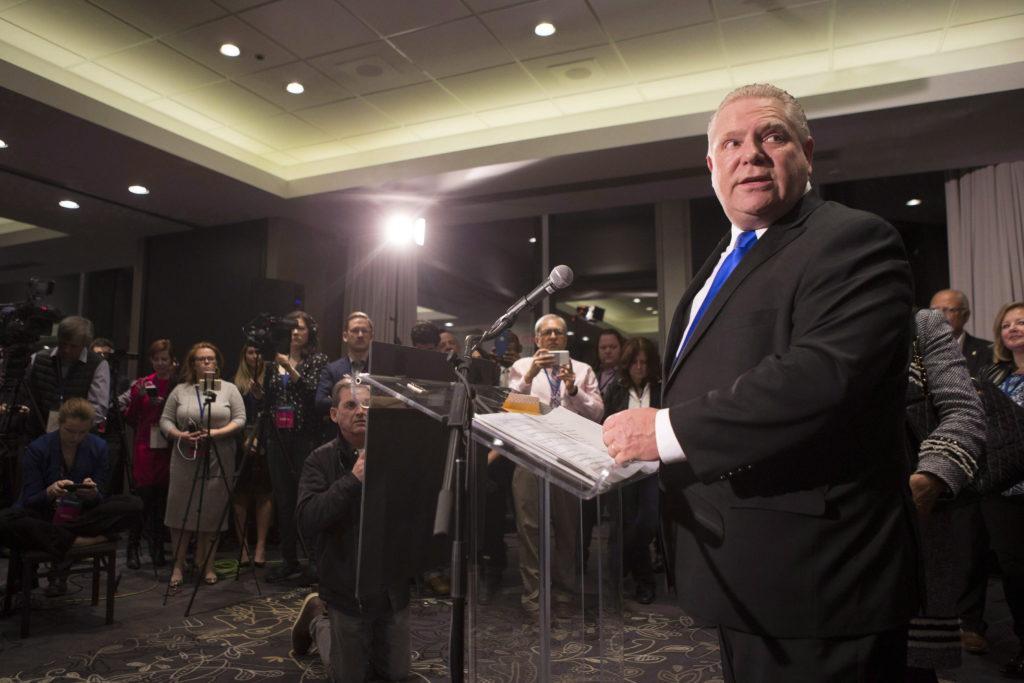 Doug Ford stands at the podium after being named as the newly elected leader of the Ontario Progressive Conservatives at the delayed Ontario PC Leadership announcement in Markham, Ont., on Saturday, March 10, 2018. A proposal from Ford to eliminate income tax for cash-strapped workers in the province is coming under fire from critics and the governing Liberals, who say raising the minimum wage provides more relief for those struggling to make ends meet.THE CANADIAN PRESS/Chris Young

The law freezes the province’s minimum wage at $14 an hour until 2020 and cuts two paid personal leave days for workers, among other things.

The governing Progressive Conservatives said the legislation would encourage job growth in the province. They have said the changes made by their predecessors imposed significant costs on businesses and argued the new legislation would ease that burden.

The measures were applauded by some in the business community but condemned by anti-poverty activists, union leaders and opposition parties, who say the changes will make life harder for average people.

“We just saw workers’ rights be torn out from under them, we just saw the lowest income workers lose $2,000 in increased pay because of the decisions that the government made today in passing legislation,” NDP Leader Andrea Horwath said.

Liberal legislator Nathalie Des Rosiers said the fact that Ontarians lost two paid sick days as a result of the legislation was “a real shame.”

“You need to ensure that your minimum standards of employment respond to the reality of work today,” she said, adding that was the purpose of the former Liberal government’s reforms.

The Tory government has said Premier Doug Ford received death threats and the labour minister had her constituency office vandalized after the legislation was introduced last month — incidents that were denounced by all parties.

Labour and advocacy groups have raised the alarm at the short time frame allotted for consultation on the Tory legislation, with many saying they were denied the chance to weigh in.

Fight for $15 and Fairness, a group advocating for the minimum wage increase to be reinstated, said the five-hour limit placed on public input was in “stark contrast” with the 14 days of province-wide hearings the Liberals held on their labour changes.

“Let’s be clear, rich corporations are the only ones who stand to benefit from Bill 47, while the lowest wage earners will be forced back into poverty,” spokeswoman Pam Frache said of the law that passed Wednesday.

Under the government’s new legislation, it will remain at $14 until October 2020, with future increases tied to the rate of inflation.

To offset the move, the Tories have exempted those earning under $30,000 from provincial income tax and given a tax cut to those earning up to $38,000. But critics maintain the plan will save workers less money than they would gain through a wage hike.

The law will also bring the total of personal leave days down to eight from 10 — three for personal illness, two for bereavement leave and three for family responsibilities.

The legislation keeps provisions brought in by the Liberals that granted workers up to 10 days of leave if they or their child experiences domestic or sexual violence. It will also maintain regulations that grant Ontario workers three weeks of paid vacation after five years of service.

A number of scheduling provisions will be eliminated, however, including a minimum of three hours pay in the event a shift is cancelled 48 hours or less before it was scheduled to begin.