Each year, crypto mining uses huge amounts of energy and generates millions of tonnes of carbon emissions. How can we green the future of crypto? 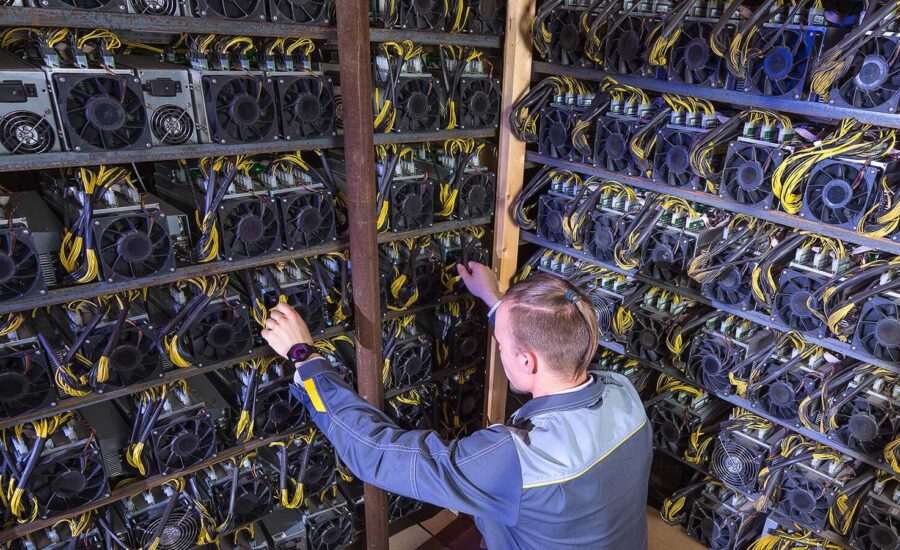 Photo by Mark Agnor from Shutterstock

Whether or not you invest in cryptocurrencies, you’ve likely seen news coverage about the negative environmental impact of bitcoin and other digital coins. Despite being a virtual asset, crypto has a very real carbon footprint.

Mining crypto—the process of generating new coins—involves using computers to solve complex computational problems. That process is incredibly energy-intensive. A single bitcoin transaction consumes about 2,095 kilowatt hours (kWh) of electricity, enough to power an average U.S. household for 71 days, according to Digiconomist. Around the world, bitcoin mining sucks up an estimated 204 terawatt-hours (TWh) annually, a little more than what Thailand uses in a year.

That energy usage has a significant environmental cost: bitcoin mining alone contributes over 114 million tonnes of carbon dioxide to the atmosphere annually. Bitcoin is the largest cryptocurrency by far, but there are many others—over 19,000, according to CoinMarketCap—and many of them also involve mining.

The growing demand for crypto

How did we get here? Unless you’ve spent the last two years in a bunker, you know that cryptocurrencies—decentralized, internet-first digital currencies—are becoming increasingly mainstream, despite their extreme volatility. Once the domain of tech bros and fiscally minded libertarians, bitcoin and other major players like ether and litecoin have exploded in popularity over the past few years, fuelled by a mix of FOMO and growing consumer, corporate and institutional crypto adoption.

As of mid-May 2022, the total market capitalization of all cryptocurrencies is US$1.2 trillion. Bitcoin accounts for about 44.5% of that.

It’s no surprise, then, that celebrities from Kim Kardashian to Matt Damon are shilling for crypto like it’s the new premium tequila, and major retailers like Walmart, The Home Depot and Starbucks are starting to accept bitcoin as a cash substitute. (Tesla did briefly, but founder Elon Musk changed his mind, citing bitcoin’s outsized energy consumption.)

Over the course of the global pandemic, the price of a single bitcoin surged from US$6,000 in March 2020 to an all-time high of US$68,000 in November 2021. As the cryptocurrency’s value skyrocketed, so did its carbon footprint, as more miners got in on the action.

What is crypto mining?

This process, known as proof-of-work (PoW), also functions to verify transactions and add them to a cryptocurrency’s blockchain, or digital ledger. PoW and other crypto “consensus mechanisms” replace the role of central banks and governments and ensure a blockchain’s security.

As bitcoin becomes more valuable, more miners are motivated to enter the field. The system is set up so that the computational problems get harder (read: require more energy) as more miners join. It used to be possible, even easy, for individuals to mine coins using regular home computers—in 2009, mining one bitcoin used just a few seconds’ worth of household electricity. Today, “you’d need a room full of specialized machines, each costing thousands of dollars” and about nine years’ worth of household electricity, per a report in The New York Times.

In fact, much of the world’s crypto mining now happens in crypto mining farms: warehouses and hangars filled with thousands of computers built just for this purpose, often located in countries where electricity is cheap.

“It’s ironic that bitcoin was founded in the spirit of ‘by everybody for everybody, and everybody is equal and everyone can become a miner.’ Now mining is big business and is mostly done in large pools,” says Andrea Podhorsky, an economics professor at York University in Toronto and a member of the school’s Digital Currencies Project. What this means for the founding principles of bitcoin (either lofty or anarchistic, depending on your POV) is debatable. But for the planet, it’s a lot simpler: “It’s a disaster,” Podhorsky says.

A few organizations and projects are looking for ways to reduce crypto’s environmental impact. One of the most promising approaches is to replace the proof-of-work mining model with proof-of-stake (PoS), an energy-efficient alternative that randomly selects miners, thereby removing crypto mining’s competitive aspect. PoS requires potential miners to “stake” their coins—essentially, put down a security deposit—for the chance to validate blocks.

This method will be put to the test when Ethereum, the world’s second-largest cryptocurrency platform, makes the move to PoS, likely near the end of 2022. If successful, the change has the potential to reduce Ethereum’s environmental impact by more than 99%. As of May 2022, a single Ethereum transaction consumes about 250 kWh—eight days’ worth of household power—according to Digiconomist’s Ethereum Energy Consumption Index. (Currently, the largest PoS cryptocurrency is solana; it’s the eighth-largest crypto by market cap.)

“This is absolutely something everyone in the crypto world will be watching with interest,” says Podhorsky. Still, she says it’s unlikely that bitcoin will make the switch anytime soon—“there is a billion-dollar industry that has built up around mining”—and she believes a more traditional carbon-tax system could be a more realistic approach. A tax on crypto prices could disincentivize miners from joining in; with fewer miners competing, the difficulty of bitcoin’s computational problems would decrease, and so would the energy required to produce coins.

To that end, Podhorsky and her team at York are working to bring transparency to the undisclosed locations of global crypto mining operations, to better measure CO2 emissions. These are “very difficult to assess if the location of miners is unknown,” says Podhorsky.

The aim is to discourage crypto farms from operating in countries that provide cheap but dirty energy. Identifying problematic crypto mining areas and operations could help attract public scrutiny, which in turn could sway local governments towards taxing miners according to their emissions or shutting them down—or perhaps rewarding miners that use renewable energy.

One example is Canadian Computational Unlimited Inc. (CCU), a bitcoin mining firm founded in 2017. Crypto’s shift to greater sustainability is already happening, according to Romain Nouzareth, a French-American entrepreneur and CCU’s chief executive officer. He chose Quebec as the location for his company’s mining facilities because the province’s energy is cost-efficient and clean—over 99% comes from renewable sources, mainly hydro-power. “The world is moving towards renewable energy, and bitcoin is moving with it,” says Nouzareth.

Last fall, CCU became the first responsible bitcoin miner to trade on the TSX Venture Exchange. Its ticker symbol is SATO, a tribute to Satoshi Nakamoto, the mysterious figure (or figures) believed to have founded bitcoin in 2009. But if the symbol is a hat tip to the past, the company’s dual mission to be profitable and planet-friendly is all about the future.

What can investors do to reduce crypto’s impact?

Investors can factor environmental impact into their crypto trading decisions. Some cryptocurrencies are greener than others. Due to its sheer size and its use of PoW for validating transactions, bitcoin consumes far more energy than other coins—11 times what ether uses, and 38 times the energy for litecoin, for example, according to Forex Suggest.

Investors who want to choose cryptocurrencies with less environmental impact have several options, all of which use a consensus mechanism other than the energy-intensive PoW: cardano, stellar, solana, nano, algorand, hedera and EOS are just some of the coins available on Canadian crypto trading platforms.

What’s next for crypto sustainability?

Activists, corporations and governments alike are launching efforts to drive crypto sustainability, including these projects:

As public awareness about crypto’s environmental impact grows, the push for sustainability could gain further momentum. Check MoneySense often for more coverage of this and other sustainable investing topics.