What’s happening in retail RN, why bonds may be looking up, the stocks (and ETFs) that don’t bat an eye at inflation, and earnings season wrap-ups. 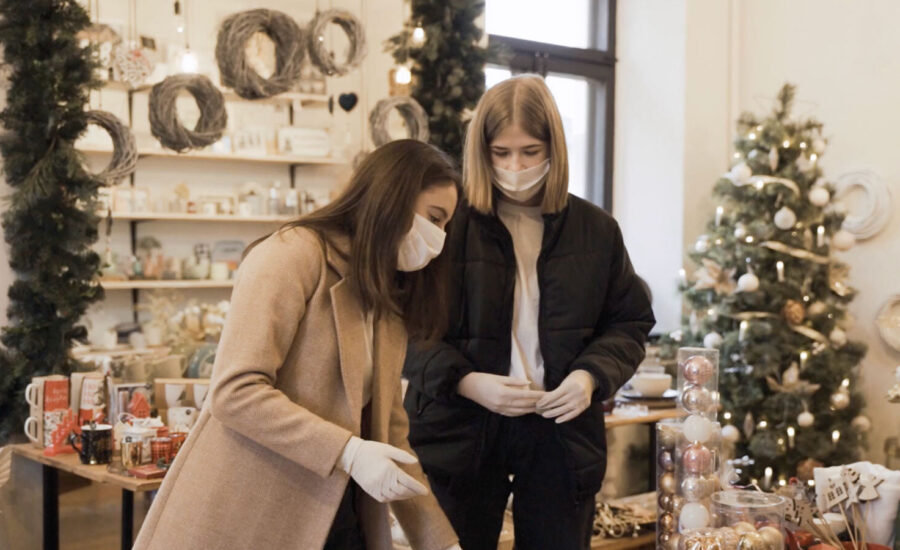 Photo by Pavel Danilyuk from Pexels

What’s in store for retailers this holiday shopping season?

It appears the holiday shopping season might come early in 2021. Consumers—a.k.a. gift givers—have been warned that thanks to supply chain issues, store shelves could become bare sooner rather than later. Or at least you might have to wait weeks and months for certain items. Many are crossing off that shopping list as soon as possible, jumping ahead of the queue.

Economists predicted a very strong October for U.S. retail sales. We might expect the same behaviour and results in Canada as well.

“The October retail sales report is one of the earliest data readings for fourth-quarter gross domestic product. Gapen expects the economy to expand by 5% in the fourth quarter, after the surprisingly slow 2% pace of the third quarter.

“If the number is as expected, ‘what it tells us is whether there’s momentum that was restored at the end of the third quarter and heading into the fourth quarter, we’re in pretty good shape,’ Gapen said. ‘It would be another data point that confirms the soft patch story rather than the slowdown.’ ”

And the U.S. sales figures did not disappoint. From Reuters:

“Retail sales jumped 1.7% last month, the largest gain since March, after rising 0.8% in September. It was the third straight monthly advance and topped economists’ expectations for a 1.4% increase. Sales soared 16.3% year-on-year in October and are 21.4% above their pre-pandemic level.”

Those buoyant retail figures—and consumers willing to open their wallets—might provide another tailwind for the stock markets. And, of course, consumer spending is a main driver of the economy. It’s an important sign of economic health. Here’s another clip from that same Reuters article:

“Consumer spending, which accounts for more than two-thirds of U.S. economic activity, rose at a tepid 1.7% rate last quarter. Economists at JPMorgan boosted their fourth-quarter GDP growth estimate to a 5% rate from a 4% pace. Goldman Sachs raised its estimate by 0.5 percentage point to a 5.0% rate. The economy grew at a 2% rate in the third quarter.”

What has to be considered at the same time though is the sustainability of that spending and disposable income. Is the spending due more to employment gains and wages, or is it the level of government transfer payments and debt?

We are now in the handoff stage. Many consumers and businesses were supported by record-levels of government support during the pandemic—and some of that support is continuing. How sustainable and true is this economic growth, as the support system gets removed? This is a tricky economic balancing act.

For now, investors are smiling. Especially those who received an early present from retailers like Home Depot (HD) and Lowe’s (LOW).

Lowe’s adjusted earnings—taking special debt conditions into account—increased 38% year-over year. Revenue increased 2.2%. Lowe’s stock price tacked on another 4.5% increase after the release of earnings. We hold a position in Lowe’s in one of my wife’s retirement accounts.

And while retail does not have a strong representation in the core Canadian stock indices, you will find a very healthy group of Canadian retailers available for those who manage their own stock portfolios. That includes some defensive companies, such as the grocers, that operate with the benefit of those wide moats.

At Loblaws (L), profit increased 28% in the third quarter.

How to use bonds to fight inflation

While we often write about commodities and certain types of stocks as the best inflation-fighters for your portfolio, we can also look to fixed income for additional support.

We can use inflation-adjusted bonds. You’ll often see them called real return bond funds in Canada, or Treasury Inflation-Protected Securities (TIPS) in the U.S. market.

Those bonds will offer an inflation adjustment on top of the yield. And, the price of bonds and bond funds will fluctuate based on rate increases or declines.

This week we saw inflation in Canada jump to an 18-year high!

The problem with the Canadian real return bond funds is that they have extensive exposure to many longer-term bonds that respond negatively—the price goes down with more enthusiasm as rates rise.

For those who want to go deep on the subject, here’s good reading from Canso Investment Counsel on Canada’s inflation history and the prospect for real return bonds.

Mackenzie offers a U.S. TIPS Index ETF, which is Canadian-dollar hedged and trades as QTIP-NE. That’s on the NEO-Exchange. Compared to negative returns for real return bonds and core bond index funds, QTIP is performing well.

While QTIP holds longer dated bonds, there is enough on the shorter end that allows the fund to be more responsive to near-term changes in inflation. The modified duration (think of that as the average duration) is 7.6 years.

The BMO TIPS offering focuses on shorter term bonds. They should be more responsible for near-term changes in the rate of inflation.

You might also consider floating-rate or ultra-short bond ETF options. In a rising rate environment short-term bonds are more attractive, as they are less sensitive to rate increases.

The strategy here, if you decide to tip your bond portfolio towards some TIPS, is to shade in some dedicated inflation protection with fixed income. It may not be advisable to go all-in. Those core bond funds and longer-dated bonds are still useful, as they can lower portfolio volatility. And they are known as a good holding during periods of economic weakness. Longer-dated bonds are a key asset for deflationary periods. We still want a well-balanced fixed income allocation.

I’d be happy to see TIPS ETFs make it into MoneySence’s 2022 ranking of Best ETFs in Canada.

Once again, for all-weather ETF portfolios you can have a look at the advanced couch potato models. That approach employs a mix of short and long term bonds—which is known as a “bond barbell”—plus commodities as the main inflation-fighter.

By way of bonds, commodities, REITs and types of stocks, it’s easy to build a portfolio that’s ready for almost anything.

What types of stocks worked for mild inflation?

CIBC Capital Markets released a report looking at sector performance from 2000, during inflationary and disinflationary regimes. Over the last couple of decades there have been seven inflationary periods and seven periods with falling inflation.

In the U.S. market, real estate and consumer staples also fared well. That’s expected, as those sectors are known as a solid defence against inflationary periods. Similarly in Canada, real estate and consumer staples also offered an inflation hedge. As would be expected, our energy stocks and financials also performed very well.

Here are the tables for sector performance for U.S. and Canadian markets.

This is from the CIBC Capital Markets:

“Utilities have some inflation ‘protection’ built into their pricing and could even win in the longer term from higher regulated rates of return.”

Utilities might provide the most opportunity, should we enter a sustained period of inflation. While real estate and other sectors have already jumped ahead, utilities have lagged. Keep in mind: The period from 2000 offered more “muted” inflation, and that inflation was mostly transitory, in that it went away. Utilities and telco stocks—what I refer to as “modern utilities”—would likely not perform very well if aggressive inflation leads to rate increases. Rate increases can put pressure on those companies—as they typically carry a lot of debt, and borrowing costs would increase greatly.

CIBC feels that stagflation (also referred to as “recession inflation”) is an unlikely outcome. But, then again, anything can happen.

If we do enter a period of higher inflation and a declining economy, gold and commodities might again be the most robust and reliable inflation hedges.

Mike Philbrick of ReSolve Asset Management offered to me via an email:

“The dynamics of inflation and its impacts on asset prices are complex. I would take great caution in drawing conclusions from the last 20-year period and extrapolating those to the next 20 years. Our initial conditions are meaningfully different.”

If we are retired or are approaching retirement, we need to protect our assets. We need to be ready for all economic possibilities.

The U.S. earnings season—that’s a wrap

The earnings season is coming to a close. Courtesy of our friends at DataTrek, let’s take a look at the third quarter.

For starters, DataTrek suggests that the continued and strong S&P price performance is warranted and is the result of robust earnings. From DataTrek, via email:

“The upside in U.S. corporate earnings this year is entirely responsible for the S&P 500’s year-to-date gains (23% better than expected at the start of the year, 25% S&P price return to date).

“Here’s how the third quarter is shaping up relative to the last several quarters. We improved upon the second quarter and the projections suggest an additional 7.6% increase in S&P 500 earnings by the end of 2022.”

In the above graph from DataTrek, we see that the rate of earnings growth has slowed. That was the suggestion in July 2021, when we discussed peak earnings growth. Markets have dismissed that peak growth stuff. They are looking forward to continued global growth and they’re looking to the other side of the pandemic:

“US and global economic growth should remain more than robust enough to allow companies to hold margins close to 13% (the average of the last 2 quarters). Let’s remember that Q3 US GDP growth was just 2.0% and margins remained strong at 12.9%. Expectations for Q4 GDP are running at 4% just now. This is not, in other words, 2018 all over again.”

With respect to that final sentence, I’d offer, that as always, the pandemic is still the wild card.

Another factor helping stock prices is profit margins. Those have been more than robust.

Above shows that DataTrek is optimistic with respect to U.S. stocks, and they expect the companies will continue to beat expectations. DataTrek explains further here:

“At first blush, it would seem easy to say that Wall Street earnings expectations remain too low and U.S. large cap earnings power is still not fully baked into stock prices … Going into the quarter’s reporting season the Wall Street was at $48.89/share. That was lower than Q2’s actual $49.02/share. Analysts thought there was no way the S&P could out earn Q2, but they were wrong—and badly so.”

Moving forward, Data Trek predicts that earnings will trump inflation and the potential of a rising rate environment.

“We don’t care if the Fed raises rates four times next year and 10-year Treasuries end up yielding 3.0%. If S&P 500 earnings end up at +$240/share in 2022 (i.e., 10% above current estimates), none of that will likely matter much to stock prices. Just look at this year for proof that earnings can trump pretty much anything else.”

Most investors and portfolio managers would agree we still need a mix of Canadian, U.S. and international equities. Not everyone is convinced the U.S. is the place to be. On my site, Canadian economist David Rosenberg suggests that Canadian stocks might offer greater value and the potential of greater returns over the near term: Canadian stocks are looking rosy.

A bonus tweet of interest: Inflation rates around the world. The U.S. leads the way.

Dale Roberts is a proponent of low-fee investing and he blogs at cutthecrapinvesting.com. Find him on Twitter @67Dodge.