A guide to having retirement income for life

Decumulation tactics for the near-retired 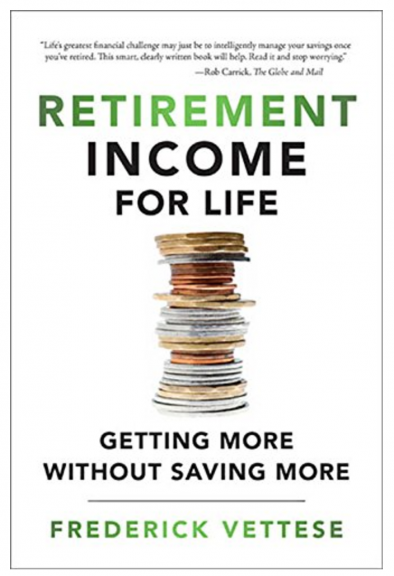 With 1,100 Canadians reaching the official retirement age of 65 every day, there’s a sea of change occurring in the investment world. The move from wealth accumulation is rapidly moving to its opposite, de-accumulation or “decumulation.”

Decumulation is actuary Fred Vettese’s preferred term over “drawdown” and his new book Retirement Income for Life (Milner & Associates, Toronto, 2018) seems destined to become the bible of any new or near retiree challenged with converting large RRSPs and other savings into reliable income.

The only retirees who may not need this book are the fortunate few and increasingly rare members of traditional Defined Benefit (DB) pensions. As Vettese says – the chief actuary for Morneau Shepell Inc. – decumulation is a much trickier act than accumulation. The book covers some ground previously occupied by Moshe Milevsky’s Pensionize Your Nest Egg or Daryl Diamond’s Retirement Income Blueprint but Vettese takes the topic further.

What I like about Vettese’s book is a 5-part strategy involving what he terms “enhancements.” In a nutshell, it’s all about cutting investment costs with Exchange-traded Funds; delaying receipt of Canada Pension Plan benefits to age 70; annuitizing initially 30% of an RRSP at the onset of Retirement; adjusting spending “dynamically” up or down as markets surge or falter; and – as a last resort – the “nuclear option” of a reverse mortgage.

Where I think he breaks new ground is in focusing on these five critical topics to which traditional financial advisors often give short shrift.  Vettese says many of the ideas are current in academic research but have been slow to make it to the mainstream. In part the slow migration of the concepts from academia to practical use can be attributed to the negative and sometimes vested views of commission-paid financial advisors. The manner in which some financial advisors are paid means Vettese’s four “enhancements” (I’m not counting reverse mortgages here) may not be in the advisors’ financial self interest: that is, some less reputable advisors may be more concerned about their own retirements than that of their clients!

Certainly, mutual fund salespeople may not be inclined to recommend well-heeled clients start buying ETFs at a discount brokerage. Similarly, some asset-based advisors may not love the recommendation to draw down on RRSPs or RRIFs early (in your 60s) in order to maximize CPP benefits by waiting to collect them at age 70. That’s also the case with annuities, which pay advisors a one-time commission of 1.5% or 2%, as opposed to a comparable commission each and every year for advisors charging by assets under management.

In the book, Vettese says he actually “pulled my punches with advisors … The academics have been slamming them pretty hard.”

Of course, a fee-for-service planner or “advice-only” planner not compensated by product sales would not be under any such apparent conflict and they are becoming more common as the low-cost argument becomes more compelling in a low interest-rate environment.

The argument for the “third enhancement” I found particularly compelling: Vettese suggests annuitizing 30% of your registered assets at or near retirement, and then further annuitizing in your 70s. Some of the rationale you can find in a YouTube interview conducted by financial planner Rona Birenbaum. Vettese favors a “joint-and-survivor” annuity that pays the survivor 60 or 75%, and buying term life insurance to make up the difference. He doesn’t recommend buying inflation-indexed annuities, since they tend to be unpopular with both insurance companies and the public: the fact that both CPP and OAS are inflation-indexed should be enough protection, he argues.

While many pundits recommend waiting till your 70s to buy annuities, especially as interest rates are still low but gradually starting to rise, Vettese sees it differently. He says the “math works wonderfully” annuitizing as early as 65, if that’s the age you plan to stop working. It’s true that mortality credits get better the later you wait, Vettese explained in an interview with me, but those worried about overvalued stock markets and a harsh correction in the next few years may not be able to afford to wait. “I’m not predicting that but one day there will be a big correction and bear market and you’re kidding yourself if you don’t plan for it,” Vettese said. Again, this is for people without DB pensions. “I tried 40% and 20% but 30% is the sweet spot at 65.” Then you would add another 20% or 30% in annuities around age 75, he said. “It may make sense to do some at 70, but if you want to keep it simple, do it twice in your life. Most are not doing it at all so once or twice is better than nothing.”

In the meantime, Vettese eats his own cooking: lacking a DB pension and turning 65 this April (like myself), he “bought an annuity last year and plans to buy more.” Because he considers annuities to be a form of fixed income, he sold fixed-income investments to come up with the cash for the (registered) annuity. As per his recommendations in the book, he also will take OAS at 65 (as will I, as my column in 2016 argued) and plans to defer CPP to 70.

Vettese also tackles the perennial topic of how much money you need to accumulate, which is closely related to the replacement ratio. As in his earlier book, The Essential Retirement Guide, Vettese comforts would-be retirees with his assertion that the traditional guideline for middle-  and high-income earners of replacing 70% of working income is “too high.”

Vettese, like his retired colleague Malcolm Hamilton, argues 50 or 60% should suffice if you reach retirement with the mortgage and all consumer debt paid off. After all, if the children are launched and employment expenses vanish, you need to generate less income and so pay less income tax, plus of course you no longer have to save for retirement itself! Plus, as you move from your go-go to your slow-go years, spending tends to fall, although it can pick up again towards the end of the “no-go” years as health care costs start to rise.

Vettese provides real examples that illustrate his view. The base case is a real couple he calls Carl and Hanna (not their real names) with $500,000 in combined RRSPs and $50,000 in TFSAs. However, he also includes material for more affluent couples with five times that amount.

The book will be available at Amazon later in February and should be in bookstores early in March. A bonus is that Morneau Shepell also makes available a free retirement income calculator for those already retired on the cusp of retirement. It can be found on its website at morneaushepell.com.

Jonathan Chevreau is founder of the Financial Independence Hub and co-author of Victory Lap Retirement. He can be reached at [email protected].