Many of use know the panicked feeling of discovering that a wallet full of bank cards, credit cards and ID is missing. Here’s a step-by-step guide for what to do if that happens. 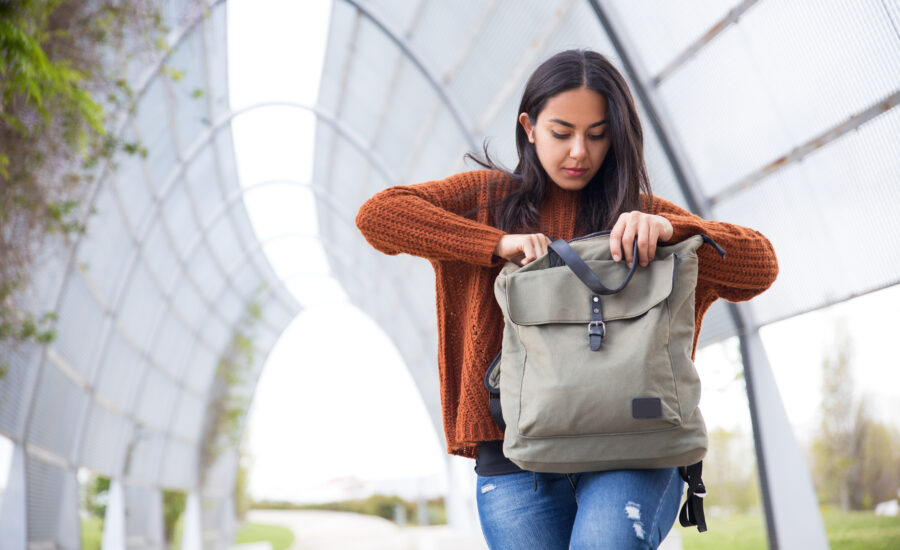 Jennifer Kesteloot was in the process of moving house in London, Ont., three years ago, when her wallet was stolen while she made a quick stop to pick something up at Walmart.

Although she’d always been very careful about documents such has her birth certificate, social insurance number card and passport, on the day of the move she put all three in her wallet. “I thought they would be safer with me than in a box with the moving company,” Kesteloot recalls.

“Never in a million years did I think that in two seconds of turning my back to pick something up off a shelf that somebody would reach into my purse and just take my wallet.”

Many of us know the panicked feeling of discovering that a wallet full of bank cards*, credit cards and ID is missing. Naturally, we hope that we’ve just left it behind on the counter at the bakery or hardware store, and that retracing our steps will put it back in our hot little hands.

But in Kesteloot’s case the problem wasn’t so easily resolved. Because there was so much information in that wallet, the thieves were able to apply for a credit card, a Rogers cell phone and a Bell TV account. While she was able to cancel her two main credit cards straight away, a third card she rarely used had “a fairly high limit and they were able to get a lot of money off of it before the bank was able to shut it down.”

“I had to go through all these hoops to prove to Rogers, and Bell, and the bank, and this credit card company that it wasn’t me,” says Kesteloot, who now lives a short distance from London in St. Thomas, Ont.

The perpetrators were captured on video and, although her wallet was never recovered, once she had a police report on hand to prove that it was stolen, the process of replacing everything got a little easier.

You’re always going to hope that you won’t go through anything like Kesteloot’s experience, but in case your wallet goes missing, here’s a step-by-step guide for what to do.

Lock your debit and credit cards

Before you even start the process of ransacking your glove compartment or purse, you may be able to quickly lock your cards through your mobile banking app (if your wallet turns up, simply click “unlock”). Many major banks offer this feature for their credit cards, including TD, Scotiabank, RBC and CIBC, and some banks do for their debit cards, too. While you have your banking app open, take note of any suspicious transactions on your accounts—especially if you don’t remember when you last had your wallet. Even small purchases, like $10 at a coffee shop you don’t remember going to, can be the sign of criminals testing the waters to see what goes unnoticed before racking up bigger charges.

Call your bank (or banks)

If you alert your bank straight away, they can put a temporary freeze on your debit and credit cards. This allows you a couple of days to determine if a kind stranger will bring your wallet to your local public transit’s lost and found, or to discover that you dropped it into a shopping bag that’s still in your trunk. If it does turn up, you’ll have avoided the hassle of updating all your autopayments unnecessarily. RBC now has a feature that will allow you to lock and unlock your debit and credit cards using the mobile app, and TD has something similar for credit cards only. In the meanwhile, of course, you’ll probably need some everyday spending money, and for that you should be able to withdraw cash in person at a branch provided you haven’t lost all of your photo ID (this is where a passport is handy). However, if you rely on a virtual bank, you could be stuck for a couple of days.

Get in touch with the two main credit bureaus used in Canada—Equifax and TransUnion. They can add a temporary alert to your profiles in case someone tries to use your information to apply for loans, credit or services in your name, says Maria Maffia, vice-president at Dragonfly ID, an identity restoration company that will make all the necessary calls and do the paperwork associated with a missing wallet or other instances of compromised identity. With alerts on file, if a thief tries to pose as you while applying for a credit card or to rent an apartment, for example, the person running the credit check will be asked to call the phone number you’ve associated with your credit profile and confirm it was you who made the application. In the case of a lost wallet or another known breach of your personal information, the credit monitoring companies offer this service for free, Maffia says.

Get in touch with your motor vehicles department

If your license is gone and driving is an essential part of your routine, beginning the process of ensuring it’s legal for you to drive is your next critical step. This is where you’re going to hope you didn’t have every piece of ID in the missing wallet, because you’ll need to present something with your name, date of birth and signature. A passport is ideal, but some provinces and territories will accept your health card instead. Verify the requirements in your area before heading to the office for your temporary license—and remember that you’ll need to take the bus or get a lift from a friend or family member. Some provinces allow you to apply for a replacement license online, too.

If your wallet doesn’t turn up in the first couple of days, it’s time to begin the process of replacing your cards. Get in touch with your financial institutions again to cancel the cards permanently and order replacements. You can do this in person at a branch or over the phone. If you can get to a branch, you should be able to get a replacement bank card on the spot (again, provided you have identification). Your replacement credit card will likely take seven to 10 business days to arrive.

Begin the process of replacing other important ID

Take steps to make life easier if this happens again

Once you’ve got everything replaced, make copies of the fronts and backs of your banking cards and identification, and lock them up at home, or in a safety deposit box if you have one, along with your SIN card, birth certificate and passport. Carry only your driver’s license and health card in your wallet. TD Canada Trust recommends carefully monitoring your account for suspicious activity—checking transactions online and making sure every line of your credit card statements matches up with your receipts—for 12 months following a lost wallet. (These are good practices even if you haven’t lost your wallet.) If you’d like to take further steps to prevent identity theft, you can pay a monthly fee of around $15 to $17 to one of the credit monitoring agencies. These services alert you to any changes on your credit, and give you unlimited access to your report and score.

Kesteloot credits these services with keeping her stolen wallet from becoming even more of a problem. “Had I not had fraud protection on my Equifax and TransUnion accounts, I still would be sorting this mess out to this day—and it’s been three years.”