Time to lock in your mortgage? 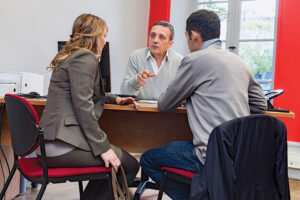 When the average discounted rate for five-year fixed mortgages recently zoomed up to 3.59%—up from as low as 2.64% in April—first-time buyers and mortgage holders took notice. In the previous few years, both interest rates and the spread between fixed and variable mortgages were low, making fixed-rate mortgages the more appealing choice. But with five-year variable mortgages now about 1% lower than fixed, prospective homeowners and those close to mortgage renewal are faced with a dilemma as they anxiously try to anticipate whether rates will continue to spike. Should shrewd consumers opt for a variable rate, given the recent upward trend in fixed rates?

First, a reality check: Rates for mortgage terms of three years or more are still lower than they were in 2011, says TD Bank economist Diana Petramala. Rates for mortgage terms of two years or less haven’t budged yet either. That said, just because mortgage rates are still low today, that may not be the case in the near future. In fact, economists such as Petramala expect rates to climb gradually by up to 2% over the next five years.

Vancouver mortgage broker Rob McLister ran the numbers to compare today’s variable rate against a five-year fixed rate based on economists’ speculations. If rates do slowly climb to 5.59% by 2018, both mortgages come out more or less equal. “People think there’s a lot more risk than there actually is,” he says. A good strategy for homeowners, he says, is to take out a variable mortgage and use the savings when compared with a fixed rate to make extra principal payments. This way you are used to paying extra should rates rise, and if they don’t, you’ll come out further ahead thanks to the lower rates and extra payments.

Schulich School of Business professor Moshe Milevsky advises consumers not to obsess about the spread between variable and fixed. Instead, figure out what the security of a fixed rate costs, and whether you require that insurance in the first place. “Think of the magnitude of the spread as an insurance premium,” says Milevsky. In other words, if your job is unstable and you’re leveraged to the hilt, the security of fixed makes sense. But if there’s no pink slip in your future and plenty of slack in the budget, “go ahead and float.”