Here's how this student saves for a good cause

Six years ago, John Battaglia stumbled upon a hobby that grew into a passion. Now 20, the Brock University student started extreme couponing to help his family out with the grocery bill. But today, apart from helping him shave the cost of his own monthly grocery bill he has turned his couponing into a strategy to help the needy.

“I like helping people,” says Battaglia, who scours websites, apps and weekly paper grocery store flyers looking for great ideas.  “I use my tips and tricks to stockpile and then donate the goods once a month.”

And the savings from his couponing add up. Battaglia has made donations of non-perishable items totalling more than $1,500 to a youth shelter in his hometown, the Brock University Students’ Union Food First program and Community Care. And this year he’s set himself the goal of cutting his personal grocery bill from $50 a month to $25 a month and using the difference to buy more products for the needy. “It works pretty well for me,” says Battaglia. “I can get fresh chicken, pork, and beef in my diet too with the price matching and couponing.”

READ: How to get free stuff on your birthday

What are some of his couponing tricks? “I used to do paper flyers but now I use mostly my mobile phone and apps for almost everything,” says Battaglia. “I use everything from paper coupons, points, cash back deals, price matching and more,” says Battaglia. “There’s a lot to it.” 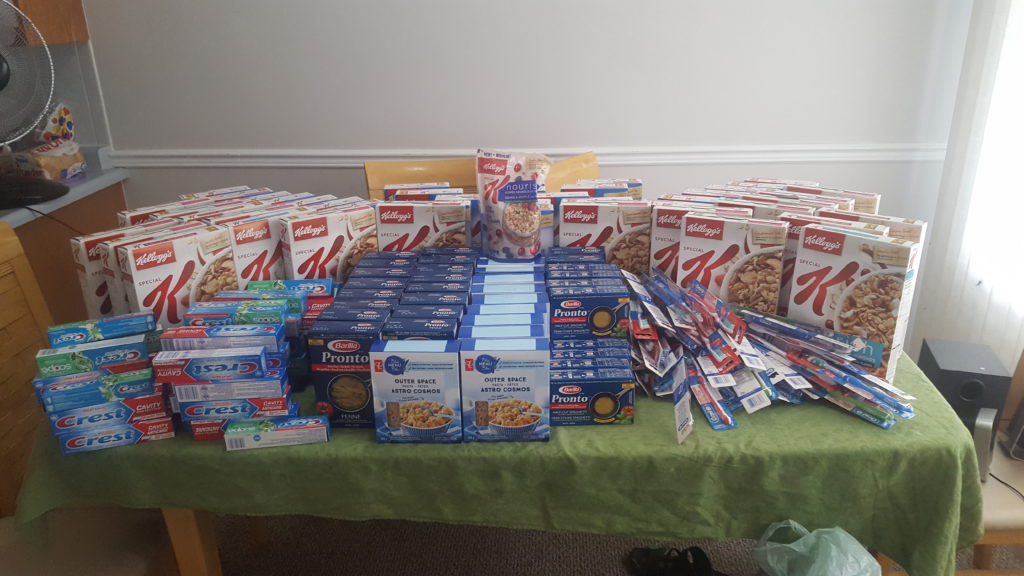 Some of Battaglia’s weekly couponing research tools include cash back apps like Checkout 51 and Caddle. He likes the fact that they allow him to upload receipts and get cash on his purchases. “Every week you get a different set of offers from these apps. For instance, if I can get $1 off a product, I look to see where the product is being offered most cheaply that week and then get the extra $1 back as well at the checkout. But if there’s one thing I’ve learned it’s that you can always do another step to get your bill down even further.”

It takes patience and perseverance. In particular, the key to extreme couponing he says is waiting for the right sale. “Don’t waste the coupons on full-priced items,” says Battaglia. “Be patient and do your research.”

Battaglia also uses loyalty points programs like PC Points and Air Miles, registering for email offers to get added discounts. But one of his favorite deal-hunting tools is price-matching, which he says is often overlooked by shoppers. “I love to use Real Canadian Superstores,” says Battaglia. “They have a list of certain stores that they will allow you to use the flyers from, and match their prices,” says Battaglia.

For instance, Battaglia may find pasta sauce priced at $3.28 a jar at Loblaw’s but it’s on sale for $2 at No Frills. He then checks if it’s on his Checkout51 app to upload the receipt when he buys, bringing the price down even further. His favourite items? Toothbrushes, toothpaste and beauty items. “Just recently I got 27 tubes of toothpaste and nine toothbrushes for free because the Real Canadian Superstore had them on sale for $1, no limit. I downloaded coupons that I had found for $2 off for Crest and for every two that I bought, I then got 10% back in points to negate the taxes and then used those points for another purchase. I stockpile and then donate at the end of each month.”

Battaglia says that he’ll look for deals on almost anything, but it varies each week. For instance, last month cereal was $6 a box at Superstore and he got the store to price match it for $2 because it was cheaper at No Frills. “Then for every two boxes I bought I saved $2, so I effectively bought one and got the second one free.” he explains.

But while extreme couponing is fruitful and empowering, it requires a lot of research time to do well. Battaglia estimates he spends about 10 hours a week on his couponing hobby all year long—the equivalent of a part-time job. “For that amount of time I get about $100 to $150 in deals a week,” says Battaglia. “It varies. But sometimes it can be much higher and one week I did $500 in savings.”

And while he does all his shopping on his own, he also belongs to a network of “couponers” who accept his unused coupons in exchange for deals more suitable to his donations needs. “People are happy to help and very supportive.”

These days, Battaglia loves to inspire others to coupon and also runs a Facebook page that he started last year called Brock Affordable Groceries for Students (B.A.G.S.) where he posts weekly deals that students and other shoppers may find useful. It has 100 members. “Every week when I get the new flyers on Wednesday I pick the best deals and make lists for people along with a photo of what the deal is.”

Might it lead to a career? Yes, says Battaglia, who has dreams to one day to turn his love of couponing into a career, helping low-income students, seniors and families to get groceries at a reduced cost and, maybe one-day, host sessions where other would-be couponers in the community can learn about his techniques. And while at first, he thought he wanted to be an accountant, he’s changed his mind. “I’d like to try to start my own business with couponing and incorporate grocery delivery,” says Battaglia. “It would be a cheaper way for people who can’t get to a grocery store themselves to buy their products each week. There would be a small markup but it would be much cheaper than doing it themselves.” A win-win all around.