Don’t get conned into buying more car than you can actually afford the next time you’re at your local auto dealership. Troubling findings from the Financial Consumer Agency of Canada show that a growing number of consumers are purchasing bigger vehicles with larger extended auto loans exceeding the standard five years.

This is concerning because monthly payments on longer loans for more expensive vehicles are often roughly the same as those on shorter loans for economy cars. And since most consumers break their auto loans during the fourth year, they’re more likely to refinance debt into their next auto loan—something known as long-term negative equity.

The example below shows how someone who bought a $35,000 car, financed with a 4% interest rate loan over five years, would start accumulating positive equity—in which the car’s value becomes greater than its loan balance—midway in the fourth year. Meanwhile, someone who bought the same vehicle with the same rate over eight years is still $9,000 underwater halfway through year four and won’t start acquiring positive equity until the end of the seventh year. 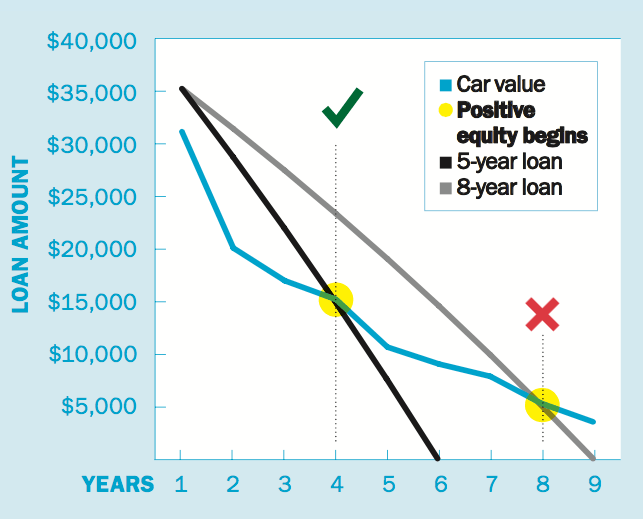 Should I get a long-term loan? »
How to get out of a bad car loan »
Buying your first car »