If you're in the market for your first car, you'll need to make some important decisions about whether to buy new or used, lease or finance. 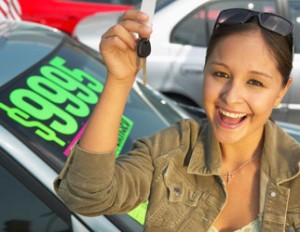 It’s May and car-buying season in Canada has arrived. If you’re in the market for your first car, you’ll need to make some important decisions. Here’s what you need to know:

It used to be common knowledge that buying a used car in good condition offered better value than financing a similar model brand new. But in today’s low interest rate environment, that’s not always the case, according to George Iny, president of the Automobile Protection Association (APA).

“You may find, if you have decent credit history, that 0% is so attractive that it makes more sense to buy a compact car financed for six years than to buy a 3-year-old one at 9% interest if you do the math,” Iny said.

Let’s take the current promotional rate on new the Volkswagen Golf now being offered in Ontario as an example.

So, for no more than an extra $150 extra per month, you can drive a brand new car with a longer warranty life.

New or used, Iny suggests signing up for the shortest term you can afford.

“Don’t get totally sucked in by the lowest monthly payments, but look for a value proposition.”

Some carmakers, including Chrysler, are offering 84 month terms but Iny is not a fan.

“You’re tied into the vehicle for seven or eight years and it will be worth less than the balance of your loan for the first six years in most cases,” he said.

Also don’t feel like you have to take the manufacturer’s lease rate if you’re not happy with it. There are other options. Most banks offer competitive vehicle financing at the dealer level with rates starting around 5%.

But be careful, Iny said.

Some dealerships get paid kickback by the bank for getting you locked into a higher interest rate, he said.

“The first interest rate they’ll quote on a bank loan will never be the best one, or very rarely.”

If you are going the new route, you may be tempted to consider leasing options with cheaper monthly payments.

It’s important to remember that a lease means you’re borrowing only a portion of the car’s full value and you’ll either have to trade it in for a new one or buy it at the end of the term. And don’t forget the extra fees for going over the mileage allowance and any damage to the vehicle. (I like to think of a lease as one really long rental).

Iny suggests avoiding leases if you can. Remember that 2012 Golf? You can drive it off the lot for $229 per month plus tax for 48 months at 2.9% when you put $3,302 down. That works out to more than $17,000 essentially for the privilege of driving the car for four years. You’ll own nothing at the end of it.

“You’re walking and the dealer has a paid up used car,” Iny said.

“When we do the math, successive leases – 3 or 4 in a row – versus owning a car will cost you many thousand dollars more, especially with high-end cars.”

Of course, the upside of leasing vehicles is that you’re always driving a new car that needs only basic maintenance like oil changes.

If you’re the type who won’t be happy unless you have the latest and greatest, leasing is best. As for the us, financing is likely the way to go.

So, how much should you spend in total? Bruce Sellery has some advice on how to set a budget that matches your income.

TV’s most vocal money guru Gail Vaz-Oxlade has a list of seven things not to do when buying a car.

Already stuck in a lease? Here are some tips on how to break it.