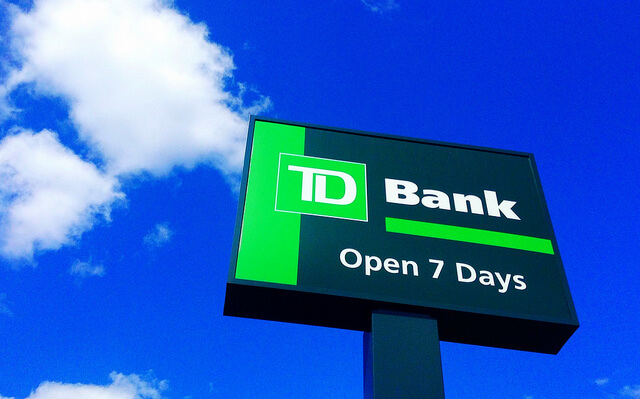 TORONTO – Several of Canada’s biggest banks are upping the fees that they charge customers even as they continue to rake in hefty profits, and experts say Canadians are likely too complacent to do much about it.

TD Bank (TSX:TD) boosted a number of the fees associated with its personal deposit accounts starting March 1, including increasing the cost of using a non-TD ATM to $2 from $1.50.

The lender also introduced a $75 fee to transfer a tax-free savings account to another institution.

“We recognize that any changes can be challenging for customers and only after careful review do we increase our prices,” said TD spokeswoman Daria Hill.

“We’re transparent about communicating these changes to our customers and we encourage customers to come and talk to us. There are ways for customers to avoid or minimize the impact of these changes, and we can help guide them to the options that best suit their needs.”

Meanwhile, CIBC (TSX:CM) has since boosted the minimum balance needed to avoid paying a monthly fee for its Everyday Chequing Account to $2,000 from $1,000 and raised the fee for each transaction over 12 to $1.25, from $1.

CIBC spokeswoman Caroline Van Hasselt said that although the bank did increase some fees this year, it also revamped its CIBC Smart Account to charge customers less during months when they bank less and to cap fees during more active months.

Do Bank of Canada rates impact you? 10 questions answered »

“This helps to ensure that you’re always in the right account because it automatically adjusts to your needs,” Van Hasselt said in a statement.

Meanwhile, Scotiabank (TSX:BNS) and the Bank of Montreal (TSX:BMO) are increasing some of fees associated with their credit cards.

That’s up from $8.07 billion in the same period last year.

Why banking services complaints are rising »

Ken Whitehurst, executive director of the Consumers Council of Canada, says it’s normal for banks — and other businesses — to raise fees they charge consumers even as they operate at a profit.

“The banks have costs to cover and expectations from the marketplace about what their return on capital should be,” says Whitehurst.

“They’re always going to be looking to increase margins as much as the market will bear. That’s what all businesses do.”

Neil Gross, executive director of investor rights group FAIR Canada, says for the most part Canadian consumers are too complacent in terms of tolerating fees from companies such as banks, rather than switching to lower-cost options such as credit unions or some of the emerging financial technology startups.

“The large banks are just betting that the average consumer will just take it and will have too much inertia to move their accounts to some other alternative,” Gross said.

“We definitely need to be noisier and more willing to move to the innovators who do respond, or even the more established banks … Consumers should be prepared to reward those who are competitive.”

Jackie Rosen of RateSupermarket.ca, a website that allows consumers to compare banking fees and other rates, says the key is to do as much research as possible on the various products available.

“You always have to compare who’s offering what and see what’s best for you,” says Rosen. “It’s always best to shop around.”