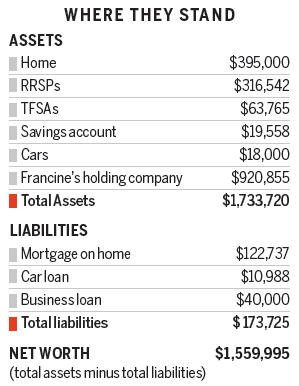 Francine Rousseau never thought she would one day own a business worth $1 million. But the 50-year-old self-employed software specialist from
Saskatoon has come a long way since those tough days as a struggling single mom to her then four-year-old son, Freddy. “It was 1999 and I had just quit my government job to start my own business when my husband Drew asked for a divorce,” says Francine, who’s now been happily married to her second husband, Gabriel, 58, for 14 years.

A small divorce settlement from that first marriage allowed Francine to put 10% down on a house with a little left over to help get her software business off the ground. Today, that same company pays her a healthy annual salary of $180,000. Yet, despite her success, she has always feared she could still end up penniless. “I have never forgotten how scary it was feeling like we didn’t have enough money to get by,” says the self-professed workaholic. “That fear is ruining my life.”

Francine worries. She worries she won’t have enough to retire on when she turns 55 and that her money isn’t invested in the right funds and she has no clue about what to do with her company when she does retire.

Probably her chief concern is her inability to make any type of retirement and estate planning decisions, particularly when her husband, a social worker, earns less than a third of what she earns. Almost all of the $1.3 million the couple has saved is a direct result of Francine’s saving and investing habits. While Francine is the first to say Gabriel is a great partner and pays for all household expenses, he isn’t a big saver or investor. “I’m at the point where I’m exhausted all the time and just want to pack up my small business and run away.” 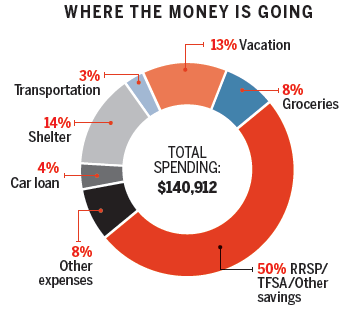 Complicating these decisions is the fact that Gabriel has two children from a previous marriage. “I want our wills to be fair but am having trouble convincing myself that leaving three equal shares is really the right thing to do. I’m paralyzed.”

Finally, Francine doesn’t feel her investments are working hard enough. They’re invested in more than 12 mutual funds that have average fees of about 2% annually. While both she and Gabriel can look forward to full CPP and OAS at age 65, as well as a small $6,000 annual pension from Gabriel’s employer, Francine still struggles with the final details of their estate planning issues. “With our passion for travel, we’ll need about $70,000 net annually for about 15 years. I need to have all the pieces of my retirement plan aligned—without that, I won’t be able to enjoy the next phase of life.”

Gabriel and Francine, the key breadwinner, have built a solid life together. To retire happily the couple needs to:

Sort out their insurance and wills. If Francine were to get hit by a truck tomorrow, Gabriel would be in charge of all their assets, including the business—something neither of them wants. It’s vital that both finalize their wills, says Ed Olkovich, a wills and estate lawyer in Toronto. Most of the matrimonial property should go to her spouse. “That’s her legal obligation,” says Olkovich. “But if Francine dies first, and Gabriel remarries, anything in the will is cancelled.” Olkovich’s suggestion? “Give to the kids while she’s still alive. It could be a small down payment on a condo for her son or RESPs for her grandchildren. The key is to always be open and transparent about what they do. After that, they should spend and enjoy the rest.”

Take care of the kids. Lorne Marr, owner of LSM Insurance in Markham, Ont., has a suggestion for how Francine can give back to her biological son, who struggled along with her during those early years, without penalizing her step-children: A $500,000 term life insurance policy would cost a non-smoker like Francine $503 a month, or $5,590 a year. If she makes Freddy the beneficiary, he’ll get the money tax-free when she dies. She and Gabriel could then split the rest of the estate three equal ways—more if including grandkids—so no one is left out.

Run the retirement numbers. Certified financial planner Janet Gray found that, based on a 3% net annual rate of return, the couple’s money should last until Francine is 95. “They’re paying 2% annually in fees but they can lower those fees by going to a portfolio manager who will charge a 1% fee based on assets and save $20,000 annually. Add in $1 million from the eventual sale of the business and they’ll be fine.”

Get an exit strategy for the business. “Work is how Francine defines herself,” says Toronto career coach Caird Urquhart. “When she has a better sense of what’s next in her life, it becomes easier to walk away.” Only then can Francine turn her attention to building a team of people who can help her wind down her business—an accountant, tax specialist, lawyer, appraiser and realtor. “If she’s able to transition out of the business for two or three years where she works only a few months of every year, she’ll be able to retire seamlessly.”