Sometimes, driving is simply about escaping the daily routine and getting a mental recharge— which is exactly what the MX-5 was designed for. 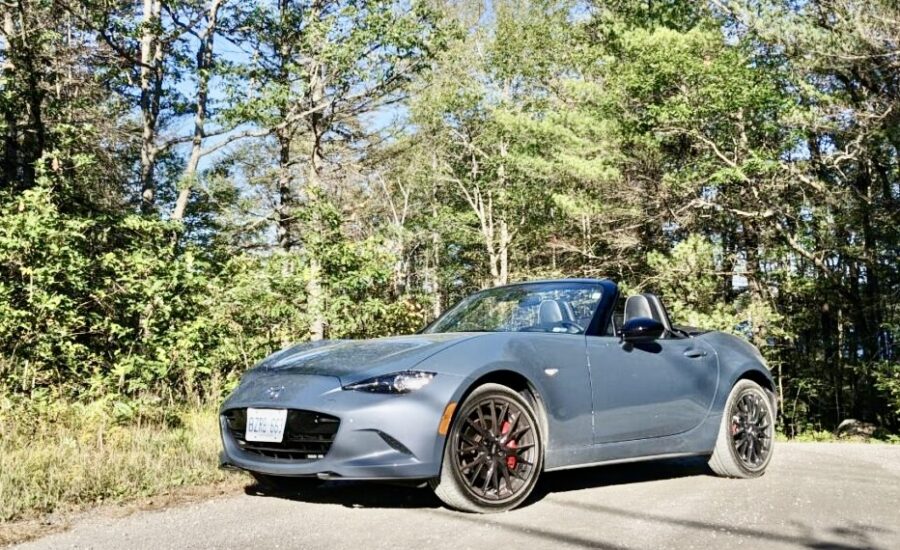 With over one million examples finding their way to the driveways of happy owners spanning four generations, the Mazda MX-5 is still an absolute hoot to drive. We tested the 2021 Mazda MX-5 GS-P (sport package), and here’s why it’s on our list of the best used cars in Canada.

Yes, and it’s worth hunting around for. As you’ve probably noticed, lately it’s been difficult to procure things like sporting goods, boats, swimming pools and the like, due to global supply chain issues and high demand during the pandemic. Things aren’t just out of stock—they’re often back-ordered indefinitely. The automotive business is not immune to this phenomenon. It’s been harder to get both new and used cars, which is extra-frustrating at a time when we’re all ready to have fun and go places again.

So what’s a sports car buyer to do? Sure, you’d love to have a Porsche Boxster GTS 4.0, but the waiting list is too long, and you don’t want to take out another mortgage on your house. Don’t fret—there are plenty of other choices. As your trusted automotive advisors, the team at Carpages.ca recommends Mazda’s perennial funster, the MX-5. It has never failed to bring a smile to the faces of its drivers. You’ll also probably want the GS-P trim, which is aimed squarely at enthusiasts; it features, among other things, sport suspension and a limited slip differential.

We asked Mazda for the keys to an example in that exact trim and, supply chains be damned, they had a beautiful Polymetal Gray model with a manual gearbox.

While driving this car, we often found ourselves looking up at the beautiful blue sky, because we never raised the MX-5’s soft-top except when we parked it. Not only does the top stow neatly away in about two seconds, but you can do it with one arm while in the driver’s seat. Even the MX-5’s sexy RF hard-top model can drop its top in a brisk 13 seconds. The RF is a handsomer car and it has that power-actuated roof, but give us the manual cloth top any day of the week and twice on Sunday. It’s cheaper, it’s free of complex electronics that could go wrong, and it lowers the car’s centre of gravity while saving overall weight.

Building on that lean-and-mean mandate is a sparsely furnished cockpit that is textbook sports car perfection. Even our tallest staffers were able to find an ideal driving position, and a precisely legible analogue gauge cluster stares back once you settle in. There are no extraneous doodads or flourishes to be found—you will not find touchscreens or flashy trim bits or even leather seats. What you do get are just the basics to stoke the fires of driving nirvana. You may miss some of the luxury features found on the GT model, but not for long. The GS-P’s upgraded Bilstein shocks, Brembo brakes and limited-slip differential—designed to offer more traction and better handling by deftly apportioning power to the wheel with the most grip—will put any pangs of regret to rest. The most compelling feature of the MX-5 interior is that cool object, made of plastic, metal and leather, that sprouts up between the two front seats. For the uninitiated, that is known as a gear lever.

The Mazda MX-5 engine and transmission: What’s really inside this used car?

The gear lever in question is attached to one of the best manual transmissions in existence. The MX-5 also has an automatic version, and it’s rather good, but we cannot fathom why you would choose that option. This is a car founded on the principle of driver involvement and connection to the machine, so we think the manual is pretty much mandatory. It is an unbridled joy to drive, whether you’re banging down through the gears to set up for a curve in the road or slogging your way through cottage-country traffic.

The engine, too, is a sweetheart. It received a power bump in 2019, but honestly, it didn’t need it. We will never say no to more horsepower, so we welcome the extra urge and the 7,500-rpm redline that comes with it. Even under our mercilessly heavy feet, the engine-and-transmission combo delivered a 7.2 L/100 km consumption figure, which is kind of amazing.

We said earlier that the MX-5 is a car that makes everyone smile, and that smile only gets bigger when you’re on a fun bit of tarmac on a beautiful summer afternoon. The MX-5 darts from apex to apex like an overcaffeinated gnat, all giddy with responsiveness. You’ll notice a surprising amount of body roll, but don’t think those Bilsteins are on the fritz—that feedback is built into the suspension to telegraph to the driver what the chassis is doing and how much grip remains available at each tire before the tail comes round. After driving so many sports cars with unforgiving ride quality, we are buying what the MX-5 is selling, and so will you.

Although it’s very much a contemporary car, the MX-5 is also a gentle reminder of the good old days. There are no drive modes, no autonomous driving aids or other electronic frippery. It hearkens back to the days of honest, wholesome motoring. You feel things, hear things and smell things while driving it around al fresco—sensations you simply don’t experience much these days, even in modern convertibles, what with their screens to reduce buffeting and their carefully tuned aerodynamics that keep your coif from getting messed up.

The electric power steering is chatty and rife with high-fidelity feedback, and it is some of the best you’ll find this side of a Porsche badge. Spending time behind the MX-5’s steering wheel is a lot like hugging an old friend—you may not get to do it often, but when you do, you’re instantly reminded of happier times.

Mazda MX-5 issues to know about

Friendships, even the strongest ones, have difficulties, and the MX-5 is not immune to that truth. And as with all close, enduring bonds, it can be hard to pinpoint things that annoy. We had to think hard to figure out what we’d change about our roadster, and we could produce only two gripes. The first is that the MX-5 is an exceedingly small car. This is not a vehicle you get into but almost seem to wear, like a well-trimmed suit. There’s pretty much no room to put anything, and the trunk is as accommodating as a mailbox. You had better be on good terms with your only passenger, because the cockpit is fairly intimate.

The other issue? Mazda’s HMI infotainment system. Once the class of the field, it is seriously starting to show its age, through its interface, slow response times and underwhelming graphics. But these are by no means deal-breakers, and we often argue that they further the MX-5’s charm.

The next time your kids are climbing the walls and those walls, in turn, feel like they’re closing in, reach for the keys to your MX-5 and head out for a drive. The destination is not important—just go. There’s a reason this car is the best-selling roadster of all time, and it’s not because it’s as dependable as the tides or that it won’t leave pools of oil and other vital fluids on your garage floor, as its European ancestors would do. It’s because this car has no other purpose than to exact joy from you, the driver. And after the last few years of pandemic life, we think you’ll agree that we could all use a little more joy in our lives.