There are easy ways she could save without clipping coupons

Vanessa has plenty of disposable income and dietary restrictions that explain why her grocery bill is on the higher end for someone basically feeding just themself. The average one-person Canadian household spends $3,050 on groceries annually, according to 2016 Statistics Canada data, or about $64 a week.

Vanessa, on the other hand, typically spends between $100-$150 every time she goes to the grocery store, about every week or 10 days. Although she has a live-in boyfriend, Eric*, they don’t keep track of or split things evenly, but simply share freely when they cook meals together a few times a week.

READ: One surefire way to save on groceries

She admits she can probably do better: “I don’t really have a set meal plan.” Occasionally, the produce she buys spoils and ends up in the trash. “And that’s where I end up wasting money — because I don’t plan properly,” Vanessa says.

The other thing she knows she should be doing is taking regular inventory of what’s already in stock at home. “I’ll buy something and think I need it, and come home and find I actually do have it,” she says. “Because it’s two people’s stuff in the fridge, it’s always packed.”

I had a look at one of Vanessa’s recent trips to the grocery store to see what she did right, and where she could improve.

We have to give Vanessa credit for doing one major thing right: shopping at a discount food store.

Shunning higher-end big-box grocery stores and instead choosing No Frills or non-chain produce stores can instantly cut about 30 per cent off your bill.

Unfortunately, for those living in downtown Toronto like Vanessa, that isn’t always realistic.

“When I lived with roommates or on my own I was really not conscious about where I shopped. I didn’t care if it was at Loblaw or Metro, if it was there and convenient,” Vanessa says. “Now that I live with Eric, we have a car, so we choose grocery stores that are a bit cheaper.”

It’s totally understandable that urbanites don’t want to schlep bags on the bus, but even factoring in the cost of a taxi ride home, shopping at the right stores is worth it.

Protein and produce, which are the bulk of items on this bill, are comparatively expensive no matter where you buy them. Bulking up meals with low-cost legumes and starches, like pasta, rice and beans would bring down Vanessa’s total.

Too bad that’s not possible in this case.

That’s because Vanessa recently decided to go on the Keto diet to lose a few pounds. The diet involves sticking to just fat, protein and minimal carbohydrates.

Working within these restrictions, she’s done an okay job, but there are still plenty of ways she could have spent less on meat than the $50 she paid—a third of her bill.

Firstly, she should be choosing fattier cuts of meats. The extra-lean ground beef she buys is $15.56/kg at No-Frills, while medium ground beef is just $12.99/kg —16.5 per cent cheaper.

Secondly, she should be buying bigger portions. A club-size pack of medium ground beef reduces that price further to just $11/kg. She can always cook and freeze what she doesn’t eat.

Thirdly, she should be doing more prep-work at home. You’re paying the butcher for their time and effort when you buy specific animal parts or cuts without skin and bones. So instead of buying a chicken breast fillet for $21.4/kg, Vanessa could buy a whole air-chilled chicken for $7.25/kg, and save a whopping 66 per cent.

3. Spending too much cheddar on cheese

Vanessa buys a lot of cheese, spending a total of $30 during this grocery trip.

But it’s not her fault cheese is so expensive; we can mostly blame the Canadian supply management system for that one.

If strapped, she may want to switch from goat, feta and blue cheese to big blocks of cheddar. No Name brand Old Cheddar cheese is just $1.50/100g, for example, while the blue cheese she buys is more than double the price, at $3.18/100g.

Unfortunately for our budgets, with cheese, you definitely taste what you pay for.

With that in mind, we recommend making a stop at a local specialty cheese shop. Grande Cheese on Orfus Road in Toronto, for example, has the same brand of blue cheese for just $2.75/100g or 13.5 per cent cheaper. It adds up fast when you buy as much cheese as Vanessa does. 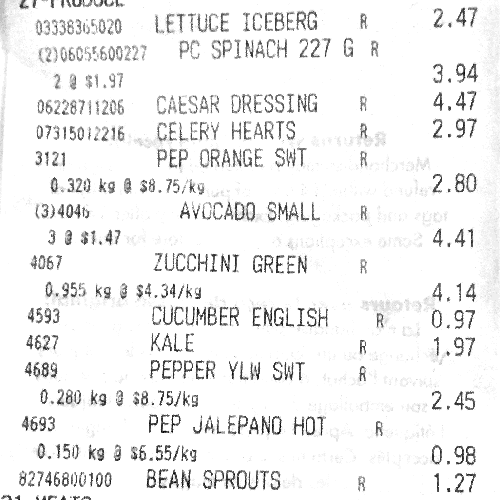 4. Fresh vs. frozen vs. frills

We noticed Vanessa bought fresh spinach for $0.87/100g. Frozen spinach is not only cheaper, at just $.32/100g, but would also solve the food-waste problem she mentioned.

Another way she can save on produce is by simply paying attention to which vegetables are the most expensive and when (there is little fruit allowed on the Keto diet). One should be suspect of anything colourful on the shelves during winter — the brighter the item, the wider you’ll have to open your wallet. That’s because it’s likely imported from a far away, warm place and the consumer ends up paying the transit costs. It’s best to learn how to cook seasonal veggies like cabbage, rutabaga and beets.

That may be why the sweet peppers she purchased, at $8.75/kg are more expensive than many meats, including chicken thighs, lean ground veal and turkey wings.

These could be used sparingly to add colour and heft to salads.

Bonus: No such thing as one-stop shopping

“Kitchen shears” for $5.49. Really? That’s what we have the dollar store for!

Overall, even though Vanessa has a laissez-faire attitude towards grocery spending, which generally involves rolling the cart around and seeing what she wants, the important thing is that her grocery spending is in line with her income.

Experts recommend spending around 15 per cent of one’s net income on food, and Vanessa, who spends around 13 per cent, is under these guidelines.

But her main obstacle to pushing that number down even more is the same as many other young, urban professionals: she values convenience above all else.

Vanessa likely doesn’t want to spend her time taking apart a whole chicken, going from store to store or spending hours comparing product prices. She knows what she can do better, namely take inventory and meal plan, though she may not be very motivated to do so.

We suspect that will change in the near future, when she and Eric want to plan a wedding, or buy a house. And when she does ramp up her saving goals, she’ll be confident and knowledgeable on easy ways to cut back without feeling deprived.

*names have been changed 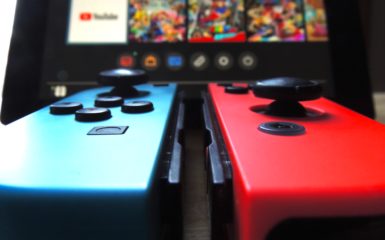