The anatomy of investing bubbles

And why they lean out the herd—but never die 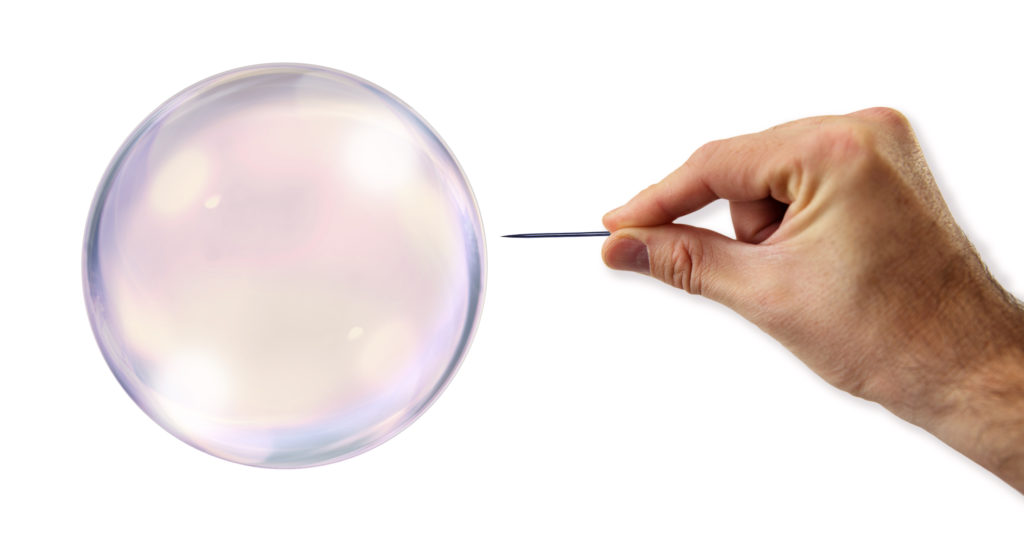 Jake Moore, a fictional Wall Street trader played by actor Shia LaBeouf in the 2010 movie Wall Street: Money Never Sleeps, posed a question. “What is the definition of insanity?” he asked. “It’s doing the same thing over…and over, and expecting a different result. By that standard, most of us are insane, but not at the same time. On that basis we trust. But can this way of life endure, if more and more people are insane at the same time?”

It becomes systemic— “like cancer,” he continued. Then he mentioned the Cambrian Explosion, the evolutionary point over 500 million years ago when complex animals first appeared.

“From that…was born us, the human race,” LaBeouf’s character said. “Now in that sense bubbles are evolutionary. They kill excess. They lean out the herd. But they never die. They just come back in different forms. When they burst, they give birth to a new day. Always creating change.”

From an economic point of view, bubbles have been described as an accelerated climb in the market prices of a given asset class, a rise marked by what former Federal Reserve chairman Alan Greenspan once called “irrational exuberance.” This valuation far exceeds the asset’s true worth and is not sustainable.

One example of a bubble came in the late 90s to early 2000s, in the dot-com space. Another came less than a decade later, in the housing market. Marketwatch.com went so far as to suggest that an “everything bubble” commenced in 2017.

READ: How to invest in Bitcoin —if you feel you need to

A month later the value of the cryptocurrency market slipped to $278.53 billion, while Bitcoin briefly fell below $6,000. It rallied to $8,000 by late March but is nonetheless facing an uncertain future. By all standards, one could say cryptocurrencies are, on the speculator side, the latest bubble victims.

The first bubble ever occurred in Holland in the early 1600s and involved tulip bulbs.

First brought to that nation by a scientist, they were subsequently stolen and sold. And over time some of the more unique varieties came to be regarded as collectors’ items by wealthier Dutch citizens.

That led to a phenomenon that has come to be called “Tulipmania,” where interest grew in not the flowers themselves but bulbs, especially those of rare varieties. Value, as a result, multiplied, in some cases rising as high as the cost of a small house.

According to BBC, the market collapsed almost overnight in February 1637, when many speculators discovered that the bulbs’ prices had risen so high they could no longer afford them. Demand, as a result, dried up and value plummeted, resulting in widespread financial calamity.

That leads to a couple key findings about bubble investments:

The dot-com bubble popped. So too did the housing bubble, leading to the 2008 recession. The expectation is that the aforementioned “everything bubble” will at some point meet its demise as well.

Sometimes bubbles burst because of some tangible event, increasing interest rates, for example, during the debt bubble of 2008. Investors chase yield, and if interest rates are low, it stands to reason that yield-seeking investors will gravitate toward riskier investments, including “bubble” assets.

One theory is that the dot-com bubble formed as a result of the Taxpayer Relief Act of 1997, which according to a 2008 paper “Capital Gains Taxes and Stock Return Volatility: Evidence from the Taxpayer Relief Act of 1997” led to an increase in stock volatility for non-dividend-paying firms — firms like computer and Internet technology-oriented companies, which were on the rise at that point. The theory goes on to imply that the bubble popped as a result of another piece of legislation — the Jobs and Growth Tax Relief Reconciliation Act of 2003 — which set tax rates for dividends and capital gains to be equal to one another, as they had been from 1986-97. The timing of the cycle of the Internet bubble was such that it was bookended by these two pieces of legislation; however, I don’t feel this was what created this bubble.

The internet bubble was a function of too many dollars, from both institutional and individual investors, chasing too few companies in this “new” technology. Analysts were finding new and quite creative ways to define valuation metrics for these Internet-related businesses – valuation based on the number of engineers employed by the analyzed company, for example.

The presumption was that each engineer was adding in developing or building new products or services and you could multiply the number of engineers at the company by X-amount of dollars to come up with a current valuation.

Really? A bit of an “if you build it, they will come” mentality. Well, oftentimes the customers didn’t come, and when the investment community realized that there were more companies creating outsized supply for various Internet products and services, the party ended and the Internet bubble burst.

Other factors also contributed to the Internet bubble, including an abundance of vendor financing (with creative ways to repay such debt), but that is a subject for another column (or book).

In the case of Bitcoin, one of the biggest risk factors is the degree to which the emotions of retail investors swing. Such investors have been much more apt to invest in the cryptocurrency than institutional investors, and also far more inclined to make decisions based on instinct than logic.

As mentioned in the piece linked above, Bitcoin could also further plummet if brand-name businesses decide against accepting digital currency, if its blockchain (i.e., its online ledger) loses out to a competitor or if the Bitcoin exchange falls prey to a cyber attack.

I don’t necessarily agree with this, as cryptocurrencies have a lot of momentum (for the right reasons), and are highly secure as well. However, when purchased by investors merely for speculation, I would say it’s “buyer” beware.

Timing is everything when it comes to investing in a bubble, and businessinsider.com suggested there are four phases to such a thing:

It is, unfortunately, extremely difficult for an investor—even an experienced one—to identify what phase the bubble might be in. Maybe the best advice came in 2009 from George Soros, one of the greatest traders in history.

“When I see a bubble forming,” he said, “I rush in to buy, adding fuel to the fire.”

This is a great concept, if you’re disciplined enough, and have the insight to figure out when to get out.

The prevailing notion, both in cinema and in real life, is that bubbles will continue to form and insanity will result. It’s just a matter of what they leave behind when they burst.

Know what you’re in for (literally), and know when to exit!

Marc Weisberg is Managing Principal of Soho Investment Partners, based in New York City. Weisberg, who previously spent a significant amount of time in the telecom, media, and technology (TMT) industries, is now focused on a more diversified approach which includes investments in cybersecurity, oil and gas, app development and distilled spirits. One of his personal mottos is to trust your gut … always.