Ford won’t sell you a sedan anymore, but it would like you to check out the Escape, which was redesigned in 2020. Our review outlines its pros and cons. 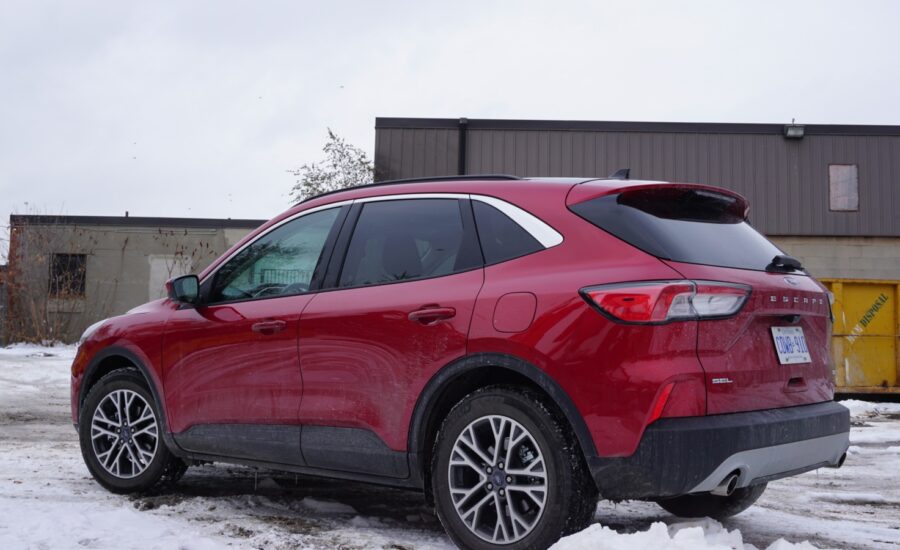 Reliability, style and fuel efficiency make the Ford Escape our pick for the best used hybrid car in Canada. This popular crossover utility vehicle (CUV), including its hybrid models, got a makeover a couple of years ago—and that glow-up earned it a spot on our list of the 10 best used cars in Canada. We tested out the all-wheel-drive 2020 Ford Escape SEL (it was a gas-powered model, so we’ve included specs for a same-year hybrid below). Here’s what we thought:

Get to know the great Escape

In case you missed it: Ford is done with sedans. The automaker intends to stop offering sedans as part of its product portfolio as early as 2022. That’s right, folks—the company that put the world in motion on four wheels with the Model T is no longer selling cars as we know them, except for the Mustang. So, the best-selling Escape, the most lucrative Ford offering besides the F-150 truck, has a tall order to fill.

Enter the wholly redesigned 2020 model. Redesigning a popular vehicle is tricky for any car manufacturer: you want to coax a new legion of buyers into showrooms without alienating your loyal customers. It’s a balancing act. But while the outgoing generation of Escapes had no trouble finding a home in driveways across Canada, it didn’t exactly set hearts afire. The 2020 model is tasked with keeping sales numbers strong and becoming a better vehicle in the process. So, no pressure.

Is the Ford Escape a good car?

We think so. Actually, we know so. If you’re familiar as we are with the outgoing model, a short drive in our tester would convince you that Ford has gotten serious about the Escape. Every so often, we encounter a huge leap forward from one generation of models to the next, and this is without a doubt one of those cases.

What’s new? Let’s starts off with the styling. We can report that the Escape is vastly easier on the eyes than its predecessor. Sure, some of the design cues are derivative, and the front end is borrowed from Ford’s European sedan offerings, but overall, it’s a pleasing aesthetic. Some have noted that the “ESCAPE” script across the vehicle’s rear hatch is an undisguised nod to Porsche’s Macan—two cars we never expected to have anything in common.

Elsewhere, with imitation continuing to be the sincerest form of flattery, Toyota’s stylists should be beaming with pride (or anger?) that Ford has apparently copied the RAV4’s taillight design. OK, we don’t know what actually happened, but this is one of the strangest coincidences we have encountered in recent memory. The redesigned RAV4 came out first, but the Escape’s development had been in the works for years, and stuff like this likely got sign-off a long time ago. Still, the resemblance is uncanny.

Let’s look at the Escape from the inside out. In the past, even top-rung titanium trim had a hard time convincing people that the Escape’s interior was a comfortable, refined and thoughtfully designed place to be. Thankfully, the 2020 model leaves all that behind, and despite the SEL trim level (which has no bells and whistles), it is at last a worthy challenger for similar vehicles jockeying for your hard-earned dollars.

Take the Escape for a spin and you’ll notice that great efforts have been taken to eliminate road and wind noise, and sounds from under the hood—engine noise, vibration and harshness—have been hushed as well. The feeling of tranquility never wanes—all the way up to and including highway speeds. Ford paid attention to various surfaces and touchpoints, and the Escape offers a much friendlier environment to interact with. Additionally, Ford’s SYNC infotainment system has been given a slicker interface and is noticeably quicker to respond. Anyone who found the older model a little small in the cargo area will be delighted by the commodious hold, and passenger room all around has been increased enough to make longer hauls a more comfortable experience.

The Ford Escape engine: What’s really inside this used car?

With the bar set relatively low by previous models, the newish 2020 Escape delivers an unmistakably more satisfying drive. We’ll start under the hood, where our SEL test car lacked the hot-rod 2.0 four-cylinder turbo (0 to 100 km/h in less than six seconds!) but did have the most interesting engine on offer: a 1.5-litre three-pot that’s incredibly smooth and powerful for its size and makes a great noise when you give it the spurs. That’s an achievement, because three bangers usually give off vibrations more suited to a paint mixer coupled with weak power figures. The opposite is true in this case, and Ford’s little EcoBoost engine makes pretty much similar horsepower and torque as the turbo four in the Honda CR-V, for example. So, the 1.5-litre is smooth and refined but also stout, and, unsurprisingly, it’s very efficient; we coaxed 9.9 L/100 km during our week of mostly city driving.

There’s more: Not only does the engine feature the now-familiar stop/start technology, but it can shut down one of its cylinders under cruising and light loads, making it the only two-cylinder engine in a car that’s in production (at least, until other automakers catch on). But put your foot down and the Escape moves off with more verve than you might expect, and the little 1.5-litre sounds cute when it’s angry.

We also appreciated the ride quality, which was very disciplined, smooth and comfortable. The all-wheel drive served up all the traction we needed during an early November dumping of snow that caught most motorists off guard. We made our way around town without any difficulty whatsoever—the streets were plowed posthaste for a change—and while we always recommend installing winter tires, our tester’s lack of that rubber never proved arduous, and we always arrived at our destination on time. Not that we can confirm you’ll never be late again.

Ford Escape issues to know about

The Escape has made significant gains in interior quality, as we’ve noted, but there’s still room for improvement. Take the interior door panels as an example. It seems as though Ford could have exerted a bit more effort on fitting and finishing the door panel trim, but this certainly isn’t a hill to die on.

The rotary shifter allows console space for a purse or what have you, but it feels a bit shaky and imprecise—we longed for a traditional shifter. Lastly, the placement of the ignition button—in the dashboard, to the right of and behind the steering, at an angle rather than facing the driver—felt like an afterthought at first, but you do get used to it after a while.

Should I buy a Ford Escape?

Ford’s redesign efforts have paid dividends, making the Escape a compelling choice in a hotly contested segment. Gone are the questionable interior finishes, busy styling and unapologetically rough-around-the-edges driving experience. Instead, we’re left with a CUV that should have the chops to disrupt the cushy lead the usual suspects have enjoyed over the last several months. If you’re looking for a used car within the hybrid or CUV segment, the 2020 Escape is worth a test drive.

Since we tested a gas-powered Escape, here are specs for a hybrid model from the same year: