We peer deep into the Kia Soul for this used-car review. Find out why this is one of the funnest cars to own in Canada. 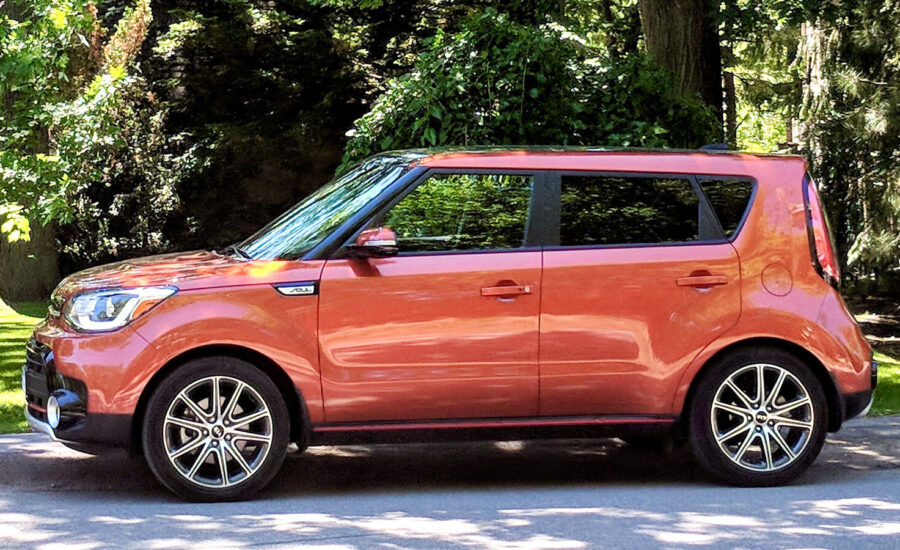 Fun, efficient and practical, the Kia Soul is a worthy addition to our list of the 10 best used cars in Canada. We reviewed the 2020 model with the sporty GT-Line Limited trim.

Is the Kia Soul a good car?

It is. It’s got a good track record, it has impressive roominess for a car this size, and for many Canadians, the price is right. Here are three reasons why the Kia Soul is our choice for the best used small SUV for Canadians.

The Soul has been an unmitigated smash hit for Kia, which has moved over one million of these cars since they first hit showrooms in 2008. When you strike sales gold like this, launching the next generation requires great care—you don’t want to alienate the buyers drawn to what the Soul has always offered: fun, efficiency and practicality, bundled together in a wrapper that screams, “Let’s play!”

The Soul has always had distinctive styling, but the third generation moves away from the folksy, cartoonish design cues toward a look that’s decidedly sharper and more modern. You’ll not mistake the 2020 Soul for any other SUV, which is a good thing. We think Peter Schreyer and Co. did an excellent job designing the Soul’s new duds.

#2: It’s boxy, and boxes are great at holding stuff

Is the Kia Soul the perfect tool for helping a friend move? We tried it, and the Soul undeniably brings a lot to the table (and then said table can be easily packed up and stowed in the cargo area). Most people would search their contact lists for a pal who’s got a pickup, but a Carpages.ca staffer who identifies as a millennial found the Soul to be the perfect vehicle to schlepp their belongings. It can hold a lot of stuff, and it was much wieldier than a pickup truck or moving van in the ever-tightening spaces of downtown Toronto.

Folding down the seats to create cargo room takes just seconds. And, after all the stuff was hauled and we unfolded the seats, we couldn’t help but be impressed by the overall feeling of roominess the Soul imparts. Our four movers (most of them on the taller side) were taken home in comfort, and no one lacked for space. It’s a commodious den inside the Soul, and that makes it the perfect choice for drivers whose lifestyles require a lot of gear, but they don’t need or want something ponderously big and thirsty to get the job done.

#3: The Soul may be a cheap and cheerful subcompact CUV, but inside it’s anything but

For cars with a price tag under $30,000, you wouldn’t expect an interior that upstages a luxury car. That said, our GT-Line tester far exceeded expectations—past Kia models couldn’t have competed in the same galaxy.

The interior plastics seem well chosen, and the build quality is first rate. Our very generously outfitted tester had all kinds of goodies, including heated and cooled seats and—something that we rarely see even in cars that cost a heap of cash more—a power passenger seat. The icing on the cake was the newest version of Kia’s UVO infotainment system. The layout and interface reminded us of BMW’s iDrive: the UVO is just as responsive to commands and menu navigation, and it looks nearly as slick, with sharp resolution and detailed graphics.

The Kia Soul engine: What’s really inside this used car?

Driving the Kia Soul, you’ll find yourself grinning while simply commuting. That’s because Kia’s engineers went to great lengths to build a car that fulfilled its promises of practicality and spaciousness while not being boring to drive. It speaks to a philosophy that even workaday cars needn’t be dull. We can sum up the driving experience thusly: the Kia Soul is much more fun than it needs to be.

Also, there’s a ton of choice in the CUV segment, but the Kia Soul is best. Perhaps you’re considering a Honda HR-V or maybe a Jeep Renegade to fill the void of a subcompact crossover in your life. They’re both good choices, but they’re not as solid an option as the Kia Soul. The only area where the Soul can’t compete with those two vehicles and a plethora of others is the lack of all-wheel drive—but put on a good set of snow tires and, unless you live in an area that gets dumped on all winter long, you likely won’t miss it.

For the price of admission, there simply isn’t a challenger that offers the Kia Soul’s mix of handsome styling (without sacrificing practicality), fun and, of course, value.

Kia Soul issues to know about

While excellence permeates many aspects of the Soul experience, there is room for improvement. Aside from the CVT transmission, which is better than in many similar cars, the Soul could benefit from snappier responses, and we wouldn’t miss the slurring sensation with shifting gears. All-wheel drive (AWD) is still not on the menu, which seems like a missed opportunity given buyer demand for that feature. Sending power to all four wheels would make what is already a hugely practical vehicle even more so.