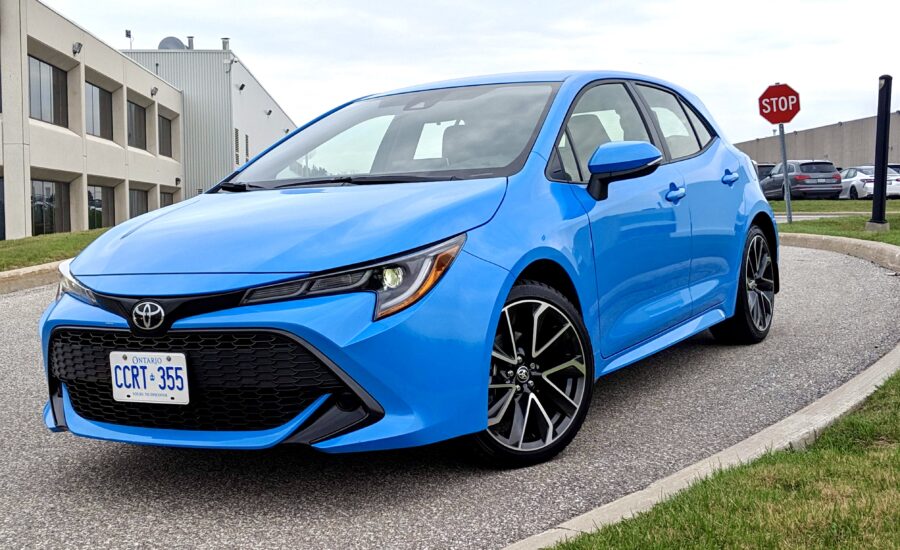 Before we get into the Toyota Corolla review, let’s switch gears for a sec and give props to Aiko Toyoda. In late 2016, Toyota’s head honcho declared that he was done with boring cars, delighting everyone who dearly missed the last-generation Supra, MR2 or Celica, amongst others. Toyoda-San knew he was making a bold claim—Toyota is one of the largest automotive manufacturers on the planet, and while ushering in profound change isn’t impossible, it does take a while.

Since he threw down the gauntlet to his stylists and engineers, however, the company’s progress has been commendably brisk—we’ve seen new versions of the Camry and Supra, as well as the company’s bestseller: the Toyota Corolla.

Is the Toyota Corolla a good car?

When we compiled the MoneySense list of the 10 best used cars in Canada, the Corolla was the obvious choice for best used small sedan. We tested out the 2019 Toyota Corolla Hatchback SE, and here’s what we thought:

If we hadn’t told you it was a Corolla, would you have known? It looks particularly slick in Blue Flame paint, which is about as far away from Corolla’s default livery of beige as you can get. Toyota front grilles can be pretty polarizing, but this car makes the design look cool. Even the silhouette is nice—it’s like a Japanese take on one of our favorite hatches, the Volkswagen GTI.

The excitement level has been ratcheted up on the inside as well—not as dramatically as the exterior, but what the cockpit lacks in pizzazz, the Corolla makes up for in function. Toyota’s expertise in build quality and ergonomics is on full display, and everything is tasteful in a nondescript kind of way. Corolla aficionados will run their fingers over the various surfaces and find nary a hard surface anywhere, at least in areas you can see. An eight-inch infotainment screen takes up residence in the central part of the dash, and while we aren’t huge fans of Toyota’s Entune suite of apps, everything works well enough.

This sounds like the Corolla is shaping up to be a fitting wingman to the flagship Supra. Not so fast.

The Toyota Corolla engine: What’s really inside this used car?

While the 2019 Corolla Hatchback is undeniably sportier than its predecessors, it isn’t ready for the big leagues just yet. Let us take a look at the engine, a 2.5-litre unit that Toyota calls “Dynamic Force.” We’ll start with the good points: It makes much more power than before and sports a lofty 13:1 compression ratio but still runs happily and efficiently on regular gas.

Now for the downside: The horsepower seems to be provided by Clydesdales instead of thoroughbreds (meaning it doesn’t really feel all that quick), the engine doesn’t sound thrilled to be revved past 4,000 rpm, and when we shift gears, its management software causes it to hang on to revs more dearly than an aging star quarterback desperately clinging to faded glory.

Again, we admire Toyota’s decision to go naturally aspirated, but perhaps a turbo would help in adding to the pace this car craves. We discovered that the engine will not protest being shifting into sixth gear even at sedate city speeds; it doesn’t lug or judder whatsoever—an asset to those steadfast on wringing every bit of energy from every drop of gasoline.

The chassis is also a huge step in the right direction, starting with the decision to turf the twist beam rear suspension for a more contemporary and sophisticated multilink setup. The TNGA platform—which happens to be a good one—underpins this car as well as others in Toyota’s lineup, including the jumbo Highlander. Handling is actually fun, and it does not come at the expense of comfort. On a long highway slog, we appreciated the refinement and settled in for a long, appreciably quiet cruise.

Toyota Corolla issues to know about

What might go wrong? The Corolla Hatchback is now less like an appliance and it’s become a car you’d sincerely want to drive, but there is still work to be done. We griped about vague clutch feel earlier, and we’ll add steering feel to that list as well. There’s a numbness there that doesn’t inspire much confidence, although its sense of path control is good, and the car doesn’t drift absentmindedly within its lane.

Those coming from Corolla sedans and the iM Hatchback will lament the shrunken accommodations in the rear seats and cargo area. If you need the room, you might want to stick with the sedan version.

Should I buy a Toyota Corolla?

Simply put, Toyota’s venerable Corolla has been the gold standard for those looking for a vehicle that provides competitive pricing, incredible reliability and excellent fuel efficiency. Bundled with Toyota’s Safety Sense technology, it’s clear why the Corolla has been the best-selling nameplate of all time, with over 50 million of them having been sold since its introduction in 1966.