The bill is also the first vertically-oriented banknote in Canada 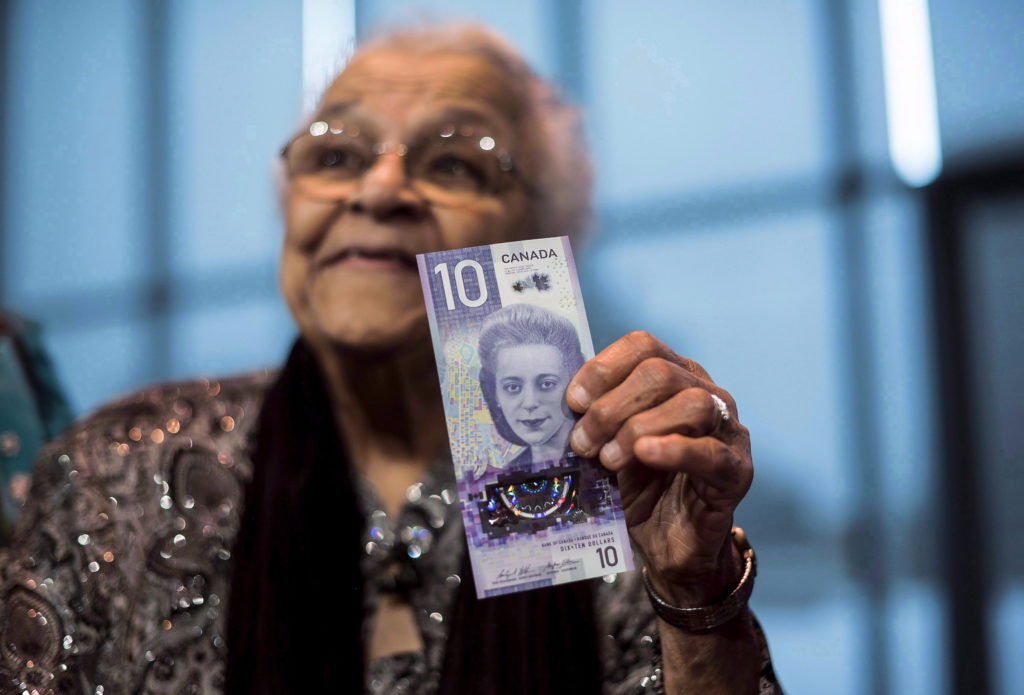 Wanda Robson, sister of Viola Desmond, holds the new $10 bank note featuring Desmond during a press conference in Halifax on Thursday, March 8, 2018. A new $10 banknote featuring Viola Desmond's portrait will go into circulation in a week, just over 72 years after she was ousted from the whites-only section of a movie theatre in New Glasgow, N.S. THE CANADIAN PRESS/Darren Calabrese

Wanda Robson still finds it hard to believe that her big sister is the new face of the $10 bill — and the first Canadian woman to be featured on a regularly circulating banknote.

The sister of the late Nova Scotia civil rights pioneer and businesswoman Viola Desmond, Robson said the move to include a black woman on the bill is a “giant step forward” in continuing Desmond’s work toward equality.

In an interview, she said she has difficulty putting her excitement into words.

“I’m so grateful and I’m happy,” said Robson, who turns 92 next month. “Those are sort of mundane words, but I’m looking for a word that would describe it, and all I can say is what the kids say today: it’s awesome!”

Robson will make the first purchase with the new bill during a ceremony Monday at the Canadian Museum for Human Rights in Winnipeg, where Bank of Canada governor Stephen Poloz and museum president John Young will officially launch the banknote.

For her first purchase, Robson plans to buy a book co-written by her and Cape Breton University professor Graham Reynolds about Desmond’s life and legacy, and give it to her 12-year-old granddaughter so she can learn more about her great-aunt’s story.

Robson said her granddaughter has shown a longtime interest in Desmond, despite being born decades after her death in 1965.

“She said, ‘You know nan, when I get my first ten dollar bill with aunt Viola on it, I’m going to frame it, and put it on a wall, and never, ever spend it,”’ Robson said.

On Nov. 8, 1946, Desmond was arrested after refusing to leave a whites-only section of the Roseland Theatre in New Glasgow, N.S., in an incident that has since become one of the most high-profile cases of racial discrimination in Canadian history.

It would take 63 years for Nova Scotia to issue Desmond a posthumous apology and pardon.

She said the new bill’s national circulation will lead to even more awareness about Desmond’s story, and the wider issue of racial discrimination in Canada.

“It’s a giant step forward into knowledge about who we are, where we’ve been, and where we’re going,” she said. “There’s still a lot of work to be done, and I really hope that this bill will get not only children, but adults, to say, ‘who is that?’ And then people will be able to pass on what Viola did and the amazing differences she made.”

Desmond was selected to be on the bill after an open call for nominations and a public opinion survey on the Bank of Canada website.

MORE: Will Sir John A. Macdonald still be on Canada’s money?

Behind her portrait, the banknote also shows a map of Halifax’s historic north end, home to one of Canada’s oldest black communities and the area where Desmond grew up.

The map includes the stretch of Gottingen Street, where Desmond opened a salon as part of a business that would eventually expand into her own line of cosmetics and a beauty school, which allowed her to mentor black women from across the country.

In recognition of the bill launch, Halifax’s North End Business Association is hosting “Celebrate Viola,” a multi-day event from Wednesday to Sunday that will feature a roundtable discussion about the civil rights movement, an original musical about Desmond’s life, and a tribute concert.

The bill is the first vertically oriented banknote in Canada, and also includes a picture of the Canadian Museum for Human Rights, an excerpt from the Canadian Charter of Rights and Freedoms, and an eagle feather, which the Bank of Canada said represents the “ongoing journey toward recognizing rights and freedoms for Indigenous Peoples in Canada.”

Desmond has received numerous posthumous accolades, including having a Halifax Transit ferry named after her and receiving a star on Canada’s Walk of Fame.