Whether you’re a snow-seeker, in hot pursuit of a balmy beach vacay or looking for something in-between, each one of these options delivers dollar-conscious surprise and delight. 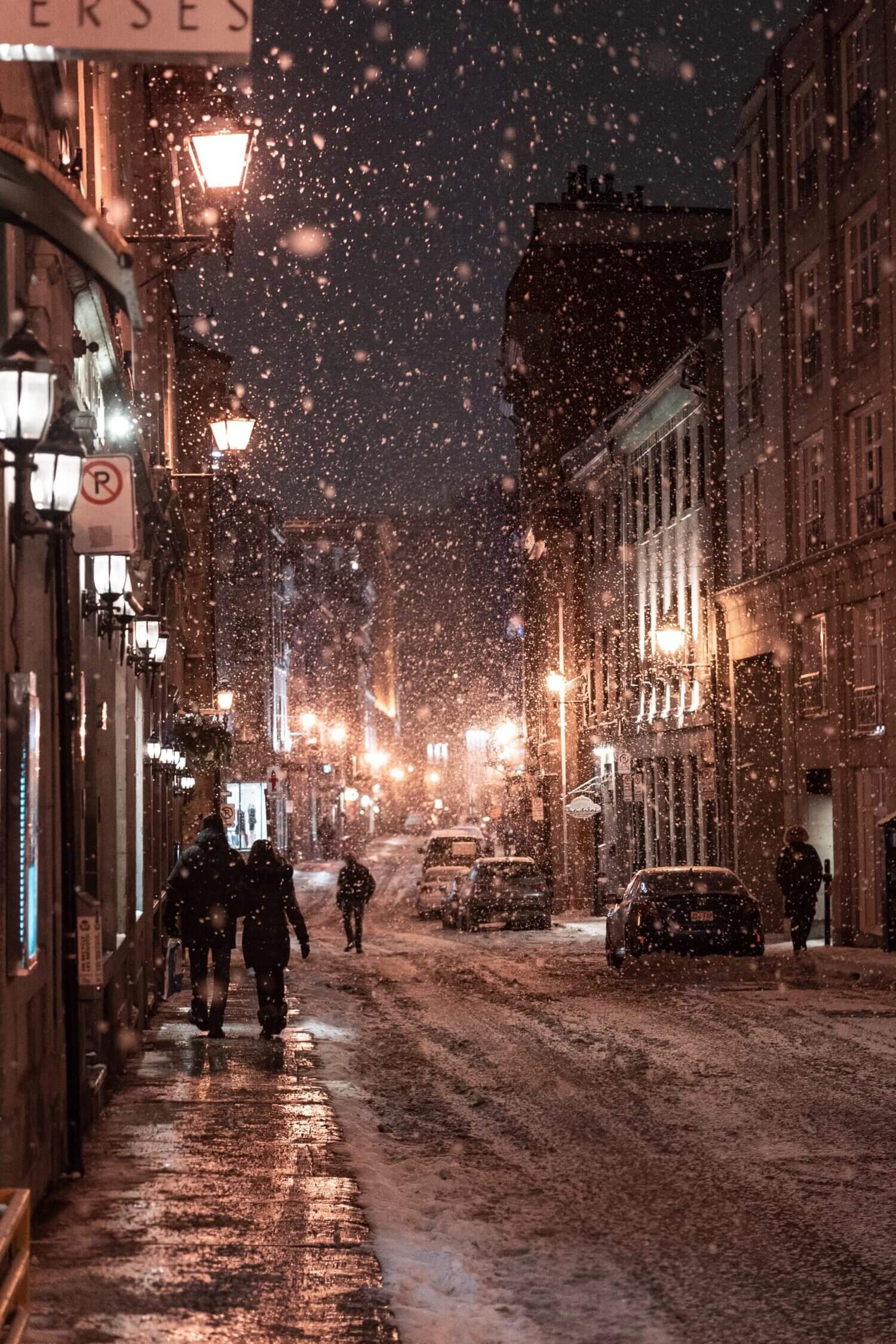 Photo by Steven Wright from Unsplash

What does the ideal winter vacation look like to you? Whether it involves a warm beach and cold beverages, or a swirling snow-globe scene brought to life, there are plenty of spots to choose from—both here in Canada, and on the other side of the world. To help inspire your next trip, I’m sharing some trending destinations that are great for travellers on any budget.

If you’re the type that embraces the snow and cold weather, then you’ll want to experience Montreal’s winter festivals. Montréal en Lumière, Fête des neiges and Igloofest all take place outdoors, are free to attend and really show off the city’s love for the winter. Enjoy the free outdoor concerts or watch the interactive ice-sculpting demonstrations; there really is something to do for people of all ages. (Foodies can purchase VIP access to stroll food- and beverage-tasting circuits throughout downtown Montreal.) If you purchase the Passeport MTL, you get free or discounted admission at many of the city’s top attractions and unlimited use of public transportation. The passport costs $93 plus tax for 48 hours, or $114 plus tax for the 72-hour version, which comes with more than $500 in value.

Admittedly, Canadians living west of Manitoba may spend a premium to get to Montreal, but you can offset your costs by being smart about your accommodations. Hôtel Universel in the Hochelaga de Maisonneuve neighbourhood by the Olympic Stadium is a great option since low-season rates are around $110 to $160 per night, and it’ll take you only 15 minutes to get downtown via the Metro. If you prefer to be closer to the action, hotels west of downtown Montreal by Concordia University offer good value compared to hotels in Old Montreal. There’s also the Sweet Deal promotion where, until December 31, 2019, you can get rooms for as low as $80 when booking direct.

Skiers should know that Montreal is a quick drive to top slopes. Saint-Bruno is the closest but Mont Tremblant in the Laurentians has quite the storybook village, with shops and restaurants to discover on foot. There’s also Mont Sutton in the Eastern Townships if you prefer to get away from the crowds.

While bargain pricing has made the D.R. a longtime favourite of Canadians looking for a winter getaway, it looks as though even more savings are in store for 2020. In 2019, the DR made headlines for some safety concerns, and although the FBI announced that some of the reported tourist deaths were due to natural causes, the negative press affected tourism, as you can imagine. In an effort to bounce back, many hotels have reduced their prices to lure visitors back to their paradise.

You could take advantage of the situation to stay at a higher-end property at a discount.  The Sanctuary Cap Cana Resort & Spa is an adult-only, all-inclusive resort that recently went through a massive renovation. The hotel has a colonial Spanish town theme and is perched on a cliffside with more than 2,100 feet of Caribbean oceanfront. This is the “Beverly Hills” of Punta Cana, where guests get access to a private island and personal butlers.

If you don’t need something so luxurious, the Hilton La Romana is a great pick, surrounded by tropical foliage and white sand beaches. If you’re travelling as a family, the younger set can enjoy arcade games, treasure hunting and more at the Kids and Teens Clubs. La Romana isn’t as popular as Punta Cana or Puerto Plata, so resorts in this region typically cost less.

For off-site experiences, speak with your hotel and arrange for a personal driver or join a tour. A trip to Santo Domingo is well worth your time as it features centuries-old architecture, gastronomical experiences, and culture that defines the Dominican Republic. Hidden in Punta Cana’s Scape Park is Hoyo Azul, a natural cenote (pit) tucked inside the rainforest where you’ll get some stunning photos. Alternatively, you can simply walk the long, white-sand coastlines and take in the sun.

Before you book your Dominican Republic holiday, be sure to get on the mailing list of vacation package companies such as Air Canada Vacations, WestJet Vacations, and Sunwing Vacations. They often have promotions where you can save big (keep an eye out during Black Friday and Cyber Monday).

You haven’t truly experienced Christmas markets until you’ve been to Berlin, where there are more than 70 to choose from. The largest of them all is the historical Gendarmenmarkt Christmas market, which features art, food and many exhibitors. The Charlottenburg Palace Christmas market is also worth noting since you’ll be at the doorstep of a former royal residence. Getting street food such as Turkish doner kebab and currywurst is the way to go if you want to save money (and sample the local cuisine), but there’s no reason to cheap out. Lunch is typically cheaper than dinner at higher-end restaurants, so go big at lunch and snack for the rest of the day. If you plan on seeing a lot of the sites while in town, pick up the Berlin Welcome Card, which gives you free access to public transportation and discounts at many attractions, shows, restaurants, and bars.

Heck, you could spend next to no money in Berlin if you took advantage of all the free things to do. Join a walking tour (tip only) or rent a bike and explore the city. The Urban Nation museum is free to enter and features contemporary art. You could also admire the architecture on Museum Island or Potsdamer Platz before tracing the steps of the Berlin Wall at the East Side Gallery.

Getting to Berlin from Canada can be tricky during the winter, as there are no direct flights. You’d have to stop somewhere in Europe first, but once across the pond you could take a budget airline to get to the city. From Eastern Canada, flights can range from $650 to $900 but if you’re coming from the west, budget $1,000 to $1,200.

Hotels are fairly reasonably priced in Berlin. The Hotel AMANO Grand Central and the Crowne Plaza Berlin will both run you about $130 a night in January, and are both conveniently located near transportation hubs.

Canadians looking for something different should consider Maryland, as its largest city, Baltimore, was named one of the “Top places to go in USA & Canada in 2020“ by Fodor’s Travel. The inner harbour is where you’ll want to start as it’s the sightseeing hub and features some top attractions including the Maryland Science Center and the National Aquarium. If you’re a foodie, you’ll want to head to the 236-year-old Lexington Market, featuring more than 100 vendors. The Maryland-style crab cakes at Faidley’s Seafood are worth the wait—and try to save room for Connie’s Chicken and Waffles.

What may also appeal to Canadians is that your dollars goes much further in Baltimore, since it’s cheaper to eat, stay and explore compared to New York. Plus, at just 30 minutes by train from Washington, D.C., and about an hour from Philadelphia, Baltimore can also serve as a “home base” for broader travels. Alternatively, it’s a good stopover city for those driving down to Carolina or Florida for the winter.

About an hour’s drive south of Baltimore is the capital city of Annapolis, which has been home to the United States Navy and the Academy since 1845. Learn about life as a Navy officer at the U.S. Naval Academy Museum and view memorabilia such as paintings, flags, uniforms, swords and firearms; admission is free. If you want to learn more about Annapolis, you could join one of their historic trolley tours or take a cruise on the bay. In case you didn’t know, Annapolis served as the nation’s capital before it was moved to D.C.

Weather-wise, Maryland generally has a warmer climate than ours, with less intense winters (read less snow), so it’s a good fit for people who need a break in the winter but aren’t interested in all-inclusive options in the Carribbean.

Although a return flight to Thailand will cost you about $1,200 to $1,600, once you’re on the ground, you could spend less than $100 a day—and that includes attractions, meals and accommodations. This estimate is based on a single traveller so if you’re travelling as a couple, your daily costs shrink even smaller since you’ll only need one room.

Spend a few days in Bangkok and dive right into the culture at The Grand Palace, which was the official residence of the kings of Siam from 1782 to 1932. Across the river is Wat Arun, one of the most recognized Buddhist temples in the world. Exploring one of the markets, such as Chatuchak or Rot Fai, is a must, but be prepared to dig and bargain if you’re looking for something special. Once you get hungry, head to the closest street vendor (or the one with the longest line up), where you can get fried rice or som tam (a Thai national dish consisting of green papaya, shrimp, peanuts and tamarind) for $2 to $4. If you decide to go to a restaurant, the ones without an English menu are usually cheaper since they don’t cater to tourists.

Now, you can’t go to Thailand and just hang out in the capital. Book a flight on one of Thailand’s low-cost carriers, such as Bangkok Airways, Thai Lion Air or Nok Air, to one of the islands where a return ticket shouldn’t cost you more than $300 CAD. Which island you choose is really a personal decision, since all of them will have great beaches and cheap accommodations. That said, some are known for parties or natural beauty, so it’s worth doing a bit of research to make sure you pick one that’s a fit for your vibe. If you can’t decide, Intrepid Travel offers a few sailing adventures where you can explore multiple locations in the Andaman Sea.