Making sense of the markets this week: March 6

The war in Ukraine fuels inflation, the Bank of Canada ignores inflation, and does bitcoin have a PR problem? 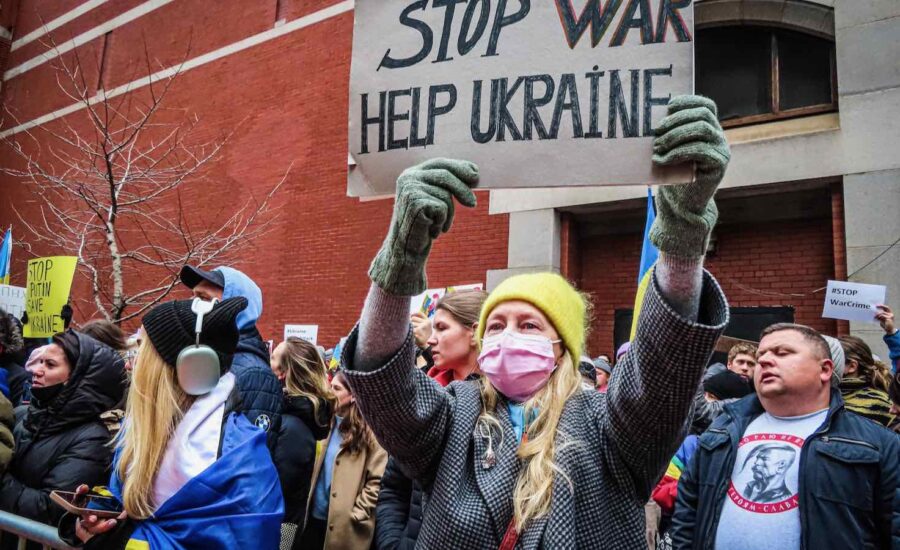 Photo by Katie Godowski from Pexels

The war in Ukraine fuels energy and commodities inflation

Heading into 2022, I wrote in my column that the big story would be the battle between solid economic growth and corporate earnings versus inflation and the threat of a rising rate environment. Of course, rising rates can (by design) suppress economic growth. There is the risk that rising rates could eventually cause a recession or put the brakes on a stock market run. In that column, I wrote:

“Barring any black swan event, 2022 might shape up to be a solid year for investors. (A black swan is an unpredictable and catastrophic event, such as the pandemic.) However, we are never free of risks. The main risk might continue to be troublesome inflation, and that could lead to the necessity of more aggressive rate hikes.”

Enter the black swan. Sadly, the real battle in 2022 is a war in Europe. That tragedy is ongoing, and that overrides any portfolio concerns. But the invasion of Ukraine presents real economic risks on a grand scale. The war creates greater risks to humanity, as the conflict could escalate into a world war or even a nuclear confrontation.

On Jan. 7, Charles Schwab listed the known risks for 2022, including geopolitical risk.

The war in Ukraine does not replace the battle of economic growth versus inflation and rising rates. Rather, the conflict has fuelled more energy and commodities inflation. Economic growth might be greatly impacted, especially in Europe.

Russia is a major energy, metals and potash producer. It supplies some 41% of the natural gas imported by the EU. Russia and Ukraine are also major agricultural producers and exporters. The war is inflationary on many fronts.

As central bankers attempt to battle inflation, they do so within the fog of war. The threat of a dangerous policy error is magnified. The banks might increase rates to fight greater inflationary pressures caused by the war. At the same time, the war might depress economic growth. Hiking rates during a decelerating economy can lead to a recession. I’m not suggesting a recession is on the way, but these are the concerns of the Fed in the U.S., the Bank of Canada and other central banks around the world.

Here’s a great chart, tweeted by Lance Roberts (no relation to me) of RIA Advisors. We see that commodities can be a drag on performance for considerable periods—and then the assets do their thing when inflation spikes.

Commodities have offered a big spike; we’d have to go back a few decades for similar weekly returns. The 1970s and early 1980s offered the unfortunate period known as stagflation. Stagflation is a period of economic decline as inflation soars.

We’re getting a taste of what works during rising inflation or stagflation. It’s a short list: just commodities, gold and energy stocks. Many investors are happy to hold that inflation insurance policy.

More than a million people have been displaced from Ukraine since Feb. 24, and aid is urgently needed. You might consider making a contribution to the Canadian Red Cross or another charitable organization of your choice.

Other options are the Canada-Ukraine Foundation, Help Us Help, Save the Children Canada and Global Medic.

Bank of Canada offers up a quarter on Wednesday

The Bank of Canada raised its benchmark interest rate on Wednesday for the first time since 2018, a move that will affect the cost of borrowing for various loans, including mortgages.

Since the early days of the pandemic, the bank’s benchmark rate—also known as the policy rate or key rate—has stood at 0.25%, matching the record low set in the aftermath of the 2008 global financial crisis. The rate is now 0.5%.

The central bank also said Russia’s invasion of Ukraine “is a major new source of uncertainty,” and it acknowledged that commodity prices had risen sharply and would fuel further inflation.

The Bank also noted that first-quarter growth appears ready to top previous estimates—and, of course, higher rates are to come.

“The Bank of Canada is in our opinion making a serious policy error as they are still using a garden hose to put out a raging fire. Meanwhile, housing prices spiral out of control, inflation is not transitory as we’re being told and young people who are the seeds of growth may uproot and move elsewhere. This week therefore was a huge missed opportunity to send a message to debt-fuelled Canadian households.”

When I suggested that we might get a dose of the same inaction south of the border, Pelletier replied, “Yup.”

Central bankers don’t appear to have the courage to take on inflation.

“We expect it will be appropriate to raise the target range for the federal funds rate at our meeting later this month.”

Small rate moves might have little effect on stock markets, and bond yields have already moved higher in anticipation of a rising rate environment. It is on the borrowing front where Canadians might feel the impact. Within that Ratehub.ca post, you’ll find the very useful mortgage calculator. (Note: Both Ratehub.ca and MoneySense.ca are owned and operated by Ratehub Inc.)

More rate hikes are likely on the way. And if inflation does remain troublesome, the banks might eventually be forced to get aggressive.

Bitcoin has not proven to be a risk-off investment. And it may not be a short-term hedge for inflation. I do invest in bitcoin, and I will refer to it as modern gold or digital gold. That said, as the nascent asset finds its footing, it remains incredibly volatile.

I consider bitcoin a more-than-useful long-term inflation hedge. And many bitcoin supporters will suggest it is a hedge against the failure or debasement of fiat currencies, the money we use every day.

Over the past several days, bitcoin has risen to the occasion. As the Russian ruble crumbled, bitcoin went on a very impressive run.

But it begs the question: Is bitcoin on the wrong side of the law?

We don’t yet know who were the main buyers of bitcoin. Was it the oligarchs of Russia or everyday Russian citizens trying to protect any savings that they might have?

When a fiat currency crumbles, citizens and nations might turn to bitcoin and another hard currency: gold.

Here is a clip that caught my attention on a post from Seeking Alpha: Bitcoin: A Weapon of War:

“Bitcoin is nothing but a tool, how we use it is up to us. Like the internet, social media, and any modern invention, it has the power to bring out the best and the worst in people. Bitcoin might indeed be used by Russia to escape sanctions, but that doesn’t change what I said in this article, that Bitcoin is a tool for progress, equity and freedom. In the end, Bitcoin is a decentralized democracy, and if necessary, and with enough consensus, measures can be put into place to stop fraud.”

On the plus side of the ledger, bitcoin donations for Ukraine topped $50 million.

It might be safe to say that given the decentralized state of bitcoin, the good will come with the bad. Of course, bitcoin was also used to fund and support the freedom convoy and Ottawa occupation. On social media, I shared that I did not think it was good for the bitcoin brand. The Canadian bitcoin community openly campaigned for donations in the name of “freedom.”

Yes, I lost some bitcoin friends on Twitter. Stay tuned for a dedicated post on the subject. If bitcoin is energy, the community should do everything possible to stay positive. Avoid the dark side.

Checking in on the portfolio risk managers

It is certainly some “lucky” timing that the assets I suggested for inflation protection would go on an incredible run. After all, inflation had been dormant for quite some time. But when inflation hits, commodities can be explosive. They do nothing, and then everything.

Energy stocks can also offer up inflation protection. And once again, these stocks can do nothing for quite some time and then become a very valuable asset.

Gold is known as a safe-haven asset. Gold did rise to the occasion when the pandemic struck. Investors have again moved into gold during the Ukraine crisis.

Here’s a snapshot of the performance for these portfolio inflation risk managers. The period is year-to-date, to Thursday, March 3.

For the period, U.S. stocks are down 8%, international stocks (developed markets) are down more than 8%, while Canadian stocks are flat. Canadian bonds (XBB) are down by over 3%. U.S. long-term treasuries (TLT) are down by more than 7%. We are in a period when not much is working.

The inflation-friendly Vanguard FTSE Canadian High Dividend Yield Index ETF (VDY) is up almost 10% in 2022. Canadian banks, pipelines, other energy stocks and telcos are all up nicely. (Check out the MoneySense ETF Finder tool.)

Given that I hold “VDY-like” stocks, have some conservative or defensive U.S. stocks in the mix, and have modest exposure to gold, energy and commodities, my RRSP account is very near all-time highs. The portfolio has cruised through recent events.

And on Cashflows&Portfolios, they asked if you should use an all-weather portfolio. Both referenced Ray Dalio’s All-Weather portfolio, which adds gold and commodities to traditional balanced portfolios of stocks and bonds.

Those of us who follow that approach are (these days) nodding yes.