Produce boxes, grocery delivery and meal kits are more popular than ever, thanks to WFH orders, safety and convenience. But what's the cost? 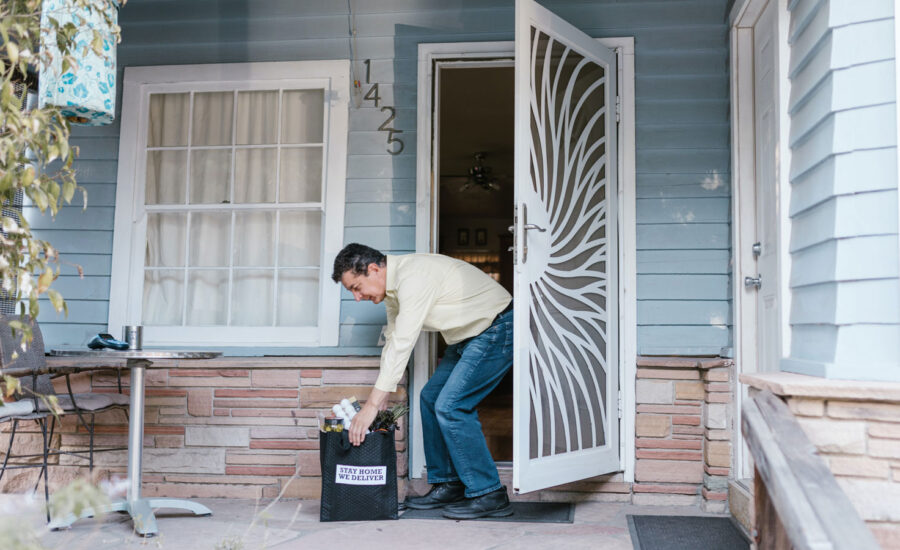 We know we pay for convenience. Just compare the prices of spaghetti sauce at the supermarket and at the corner store, and the latter’s markup is evident. When the pandemic struck and curbside pickup became the norm, many Canadians were happy to forgo finding the perfectly shaped sweet pepper to order their groceries online.

Online food and grocery orders got a healthy boost during the initial lockdown in 2020: Sales in April were 107% higher than they were in February, according to Statistics Canada. The momentum continued as Canada opened up, shut down and opened up again and again through rolling lockdowns.

According to the Trends & Spends: PayPal Canada’s 2021 Consumer Shopping Study, 19% of Canadians opted to shop online for groceries in March 2020 when the lockdown first hit, and that number jumped to 30% in April 2020. And by June 2021, almost half of Canadians (49%) filled their grocery cart online. The report also found that Ontarians are the most likely to shop for groceries online—36% compared to 24% to 30% in other provinces.

With the increase in demand for food delivery services, suddenly we had more choices, too. Remember when we were limited to select grocery stores in certain urban centres and high-end nutrition services? Now, we can ask an Uber driver to pick up groceries. We can order from all the major grocery chains, and even smaller grocers “pivoted” to bring groceries to our front doors, too. (Here are the best credit cards to use for buying groceries.)

How big is the trend for food and grocery delivery in Canada?

“Every food and delivery company out there is learning how to get to the money instead of waiting for the money to show up. We’re redefining what convenience actually means as consumers. It was about packaging and counter-ready and on-the-go foods. That was ‘convenience’ before. Now, within this COVID era, it’s about public health risk. It’s about staying home and working from home. We did a bit of an analysis at the lab [and] we think that by 2025, 70% of the workforce in Canada will be working at least five days from home a month—that’s basically a day a week. That means, as it pertains to convenience, we will have fewer meals at coffee shops, fewer meetings in restaurants.”

What types of companies can we order food from? There are grocers, meal kits and transportation services. What else?

“You have the omni-channel from the retail side, so service and retail. That’s how I dissect the food distribution world. It’s basically online and brick and mortar. And of course, there could be a combination of things here. For example, meal kits are becoming more popular with grocers. And there’s a lot of investment going on there for e-commerce, for sure. On the service side, you have ghost kitchens to meal kits to curbside pickup to delivery. Even food processors are operating like restaurants. This pandemic has democratized the supply chain. You can use your phone to order meals from Kraft Heinz now. There are ghost kitchens in Toronto and Montreal, called Kitchen 57.”

What are ghost kitchens?

“A ghost kitchen is basically a building filled with cooks, in some remote place, outside the city, where land is very cheap. There are no dining halls, no pickup counter. Everything is delivered through apps like UberEats and SkipTheDishes. And, you may actually have a chef making sushi right next to a chef cooking spaghetti. There’s no branding. And it can also be when local restaurants get together to operate a ghost kitchen.

“Essentially, what I’m trying to say is that all the rules we had before COVID, most of them no longer apply. For most Canadians, our grocery shopping habits have changed. And so lots of opportunities for businesses.”

How much does food delivery cost in Canada? I’ve read that in the U.S. the premium for convenience is about 25%.

“In terms of costs, it’s hard to put a percentage like that for groceries. It really depends on the size of the order. If you’re looking at a 55-item order, it’s not 25%; it’s probably more like 10% or even less [based on a standard delivery fee].

“If you look at Instacart, for example, you’re looking at a $5 to $7 premium, depending on where you live. So it’s not that bad. And with some services, it doesn’t matter if you order five items or 50 items, it’s basically the same fee. In Halifax, for example, the fee is $6 no matter what. And the food is delivered to you within two hours basically.” (In Toronto, Instacart has a $3.99 fee for same-day delivery for orders over $35.)

What grocery and food delivery services do you like?

“Instacart is very convenient—I’ve tried them all. With Instacart, they really do make an effort to get you in the store virtually. Basically you put your order in, and then maybe 10 minutes later, you get a text from your Instacart shopper: ‘I’m your Instacart shopper, I’m shopping right now for your food.’ They tell you that you’ve ordered bananas, they’re out of bananas, and these are the options to substitute. At the beginning of the pandemic, the accuracy rate was awful. I mean, they were just substituting without consent. And now they are really well organized.

“And there’s also the Sobeys model with Voilà, where it’s integrated, owned and operated by Sobeys. But Instacart is an app. It’s subcontracting delivery, for Loblaws, Walmart and Costco. You get a car, bringing you your groceries. There’s no uniform or anything. It’s not as sophisticated as Sobeys, for example, with the fleet and branding.”

The effect of inflation on groceries and gas

While the pandemic has moved more and more Canadians to try delivery, the recent news of inflation rate spikes has hit the food apps where it hurts: groceries and gas. So how is that playing out with the cost of food and grocery delivery?

The prices of these services are rising accordingly. So you will see a difference in prices from the past year, if you compare apples to apples, and cans of tuna to cans of tuna, and so on.

As for gas, “Some food delivery apps are now adding a fuel surcharge, at least temporarily, to keep drivers in the network,” says Charlebois, which has helped keep drivers driving, he adds. “We are expecting fuel costs to impact food prices overall, unless fuel prices drop. Since March 8, when President Biden announced it would ban Russian oil imports, markets are much calmer.” (Read more about what happened with the markets that week.)

So, do food and grocery apps still make sense now? “For some, likely,” Charlebois  adds. “But the number of consumers who may not be able to afford the cost for more convenient options will likely grow in [the] months to come.” But with hybrid office settings and some still WFH, “the online food market will likely remain much larger than it was prior to COVID.”

How much do you pay for a “more sophisticated” food delivery service like that?

“It’s a little bit more expensive—$8 or $9. I haven’t used Voilà because it’s not available here yet. But the thing about it which I think is very interesting is that it’s a human-less process. It’s all machines, fulfilling orders with a distribution centre in Vaughan. It can fulfill a 50-item order in less than five minutes. It’s impressive.”

Do I tip for grocery delivery?

“We haven’t looked into that. We looked at tipping in food service. Apps will prompt you for tipping if appropriate and are clear on the protocols. But it’s not the same as prepared food delivery, like with UberEats. With delivered meal kits, like HelloFresh and Goodfood, you don’t tip for that.” More on Charlebois’s views on tipping.

Can you get lower-quality food from delivery? I mean, you’re not the one picking through produce. What should we buy and not buy online?

“Everyone is concerned about that. When you go into a grocery store, you don’t just buy food, you buy aesthetics, you buy time. I’ve seen people go into the back of a shelf so the item is fresher. Especially at the dairy counter, you don’t buy milk that is about to expire. You know the ones at the front are about to expire, so you look for one that will expire in a few weeks.

“You can’t do that when ordering online, which is why a lot of companies are trying their best to get you involved as they’re shopping for you in-store.

“I think some services are doing a better job than others. There are food categories that are not as popular to buy online, such as meat and produce.”

Would you save money ordering online because you’re not tempted to make impulse purchases?

“No, prices are going up. Food inflation is an issue, since the start of the pandemic. Meat is up 18%. Bacon is up 22%. Eggs are up 14%. We did a survey on inflation and how people are coping. They’re using more flyers, coupons, buying last-minute food at a discount, trading down with private labels. But we surveyed 10,000 Canadians, and this issue of ordering online versus showing up at the grocery store didn’t come up at all.”

What about comparison shoppers and coupon clippers—how can they make the most of this type of service?

“First of all, you won’t save online as much as you would shopping in person. You’re not going to get deals. That’s why grocers are learning how to make money online, so they’re keeping fees as low as possible, but prices are typically much higher online.”

So, if I go into a grocery store, the price I see for an item may be more expensive online?

“Likely. They’ll reward you for showing up, and you’ll get a lot more advertised deals. If you want to save some money, use the FoodHero or Flashfood apps. Those are very hard to beat. And then there are ‘enjoy tonight’ deals, with food that is about to expire and you can save 25% to 50%. But you have to go and pick it up.”