Many Canadians are struggling with higher food costs. Here’s how to save money when shopping for groceries. 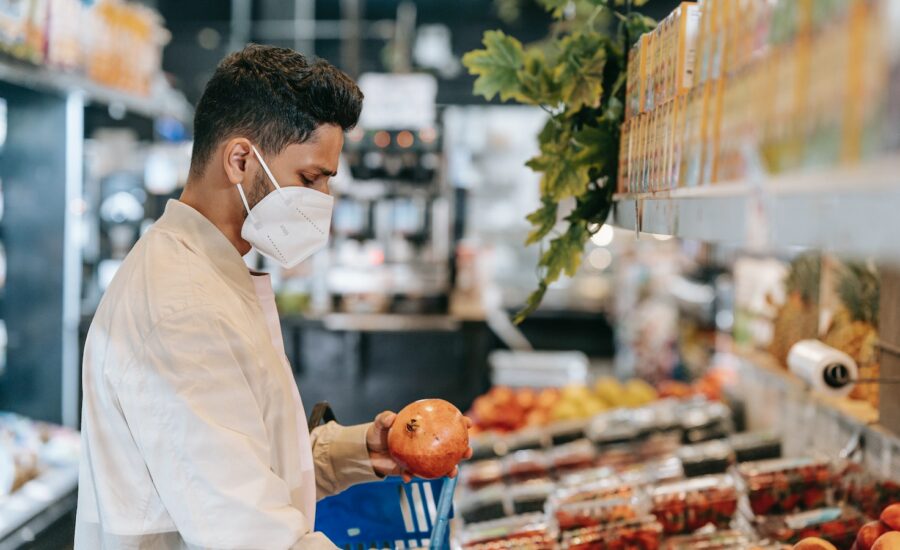 Photo by Michael Burrows from Pexels

Welcome to MoneyFlex, our new column about the financial challenges Canadians are facing today. Each month, journalist and editorial assistant Margaret Montgomery will share expert insights and practical tips to help you flex your money skills—starting with how to tackle inflation’s effects on your groceries.

At the checkout of my local grocery store, I find myself holding my breath as the total on the screen climbs higher and higher with each scanned item. Even staples like margarine and pasta seem to teeter on the edge of unaffordability.

I’m not imagining it—these foods recently topped the list for highest month-over-month price increases. In November 2022, you could expect to pay an average of $7.11 for a 907-gram tub of margarine in Canada, up 37% from the $5.16 you would have paid in the same month in 2021.

The rate of inflation in December was 6.3%, Statistics Canada said in its most recent Consumer Price Index (CPI) report, which tracks the cost of hundreds of everyday goods, from groceries to gas. Food inflation was even higher at 11%. The food inflation rate in November (11.4%) was the fastest year-over-year increase since 1981. For reference, the Bank of Canada aims to keep inflation at 2% per year. Rising fuel costs, labour shortages and supply-chain problems have also made food pricier.

I’m not alone in my experience. Canadians are facing increasing food costs at supermarkets across the country. Nearly six-in-ten respondents (59%) in a recent Equifax survey said they “are using coupons and looking for deals more at grocery stores versus last year.” Just over half of Canadians (54%) are “cutting back on grocery shopping altogether.” And, alarmingly, a survey by the Canadian Hub for Applied and Social Research at the University of Saskatchewan found that almost 20% of us are eating smaller meals or skipping meals because of high food prices.

In July, more than 60% of respondents to our social #poll were either shopping at new/various stores or buying more store brands to cope with higher #grocery costs.

Is couponing something you do or would consider?

The report also predicts that overall food prices in Canada will continue to rise by 5% to 7% in 2023. Sigh.

So, how can you save money on groceries?

I can’t change the price tags at the grocery store, but I did get some money-saving advice from Liz Schieck, a Certified Financial Planner at the New School of Finance.

How to budget for groceries

Budgeting for everyday expenses like groceries is essential. Without a budget, you might start dipping into funds needed for your must-pay bills or emergency savings.

Budgeting doesn’t have to be an extremely complex exercise, and you don’t necessarily need a fancy Excel spreadsheet to do it. “The only budget anybody ever really needs is one that separates the money they can spend from the money they can’t spend,” Schieck says.

She recommends drawing a hard line between your bills—think debt payments, rent and/or utilities—and your everyday spending on things like groceries, gas and takeout food.

“For most people, I suggest lumping all the day-to-day spending in together,” Schieck says. “If you eat out more in one week, you’ll have less money for groceries, or vice versa. Set yourself a weekly spending limit for everything and then try to stick within that.”

Cash stuffing is a viral budgeting method used to limit spending and divide up funds. The idea is that after you allocate part of your income into must-pay categories like rent and utilities, you withdraw the remainder of your paycheque in cash. Then, using envelopes or a cash-stuffing binder with separate pockets, you set aside cash for everyday expenses like groceries, gas and takeout food. You can look at the average grocery bill for your age group to determine a reasonable amount to set aside each month.

I use different bank accounts and cards to manage spending and saving. My salary is deposited into my chequing account. I use that account to pay my monthly bills like utilities and/or my credit card bill. Then I transfer a small amount (usually $50 to $100) of my paycheque to my high-interest savings account, which I use as my emergency fund and to save up for trips or pricier one-time purchases. I use the amount that is left over in my chequing account for weekly spending, including groceries, which I pay for with a debit card connected to the account.

If you prefer to use your credit card for daily expenses like groceries, be sure that you are earning rewards points or cash back. I prefer to limit my card usage to subscriptions and occasional online purchases, as it’s easier for me to track spending this way. Each time I get paid, I know roughly how much I’ll need for groceries, restaurant meals and other spending until my next paycheque.

Schieck says the two ingredients of smarter grocery shopping are planning and being realistic.

Planning at least a few meals each week will help you avoid relying on takeout and overbuying groceries, which can lead to food waste if ingredients expire or spoil. Here’s how you can plan effectively:

“I also recommend keeping a few things in your freezer that are easy enough to cook and that might help you avoid overspending on takeout,” Schieck says. “Frozen fish and fries have saved me from ordering in more times than I can count.”

Consider keeping some form of protein and veggies, such as frozen chicken, meat substitutes and stir-fry veggie mixes, in your freezer to help make it quick and easy to prepare healthy meals.

Shopping at bulk-food stores can help cut costs because prices are often lower per unit than the typical packaged foods (for one thing, there’s less packaging), and you can buy just the amount you need.

A habit I’ve picked up is buying staples like oats, walnuts and chia seeds in bulk. They usually last me months for my morning oatmeal, and they save me money on my weekly trips to the grocery store.

Buying in bulk makes sense financially if you can use up the product before it expires. The same goes for shopping at a wholesale retailer like Costco—split those super-sized products with a friend.

Compare pricing per unit, not per product, to save money

To compare similar items at the grocery store for value, Schieck says to look for the price per volume. “The price might say $3.99 and then in the fine print below it will say $0.80/100 g, for example,” she says. That figure is the price per volume, or price per unit. “It’s a great way to comparison shop between brands and different package sizes in the moment without doing advance research.”

More ways to save on groceries

In my quest to save money on groceries, I found a few solid tips you can use to improve your food-buying habits.

One of my goals for 2023 is to create a meal plan before I build my grocery list. Buying intentionally could help me save money, though I will have to commit to allocating time to this every week. When I’m not as mindful when grocery shopping, I can end up overspending and wasting food.

I hope these tips help you reduce the impact of rising food costs. Try different strategies to see what works best for your schedule and your budget. And if you have more money-saving tips, share them below!


Get free MoneySense tips and more in your inbox! It pays to know.
Go to Site