It’s hard enough to understand how regular interest rates work, so no one will blame you if negative rates make your head spin. To help make sense of things, we’ve put together this primer. 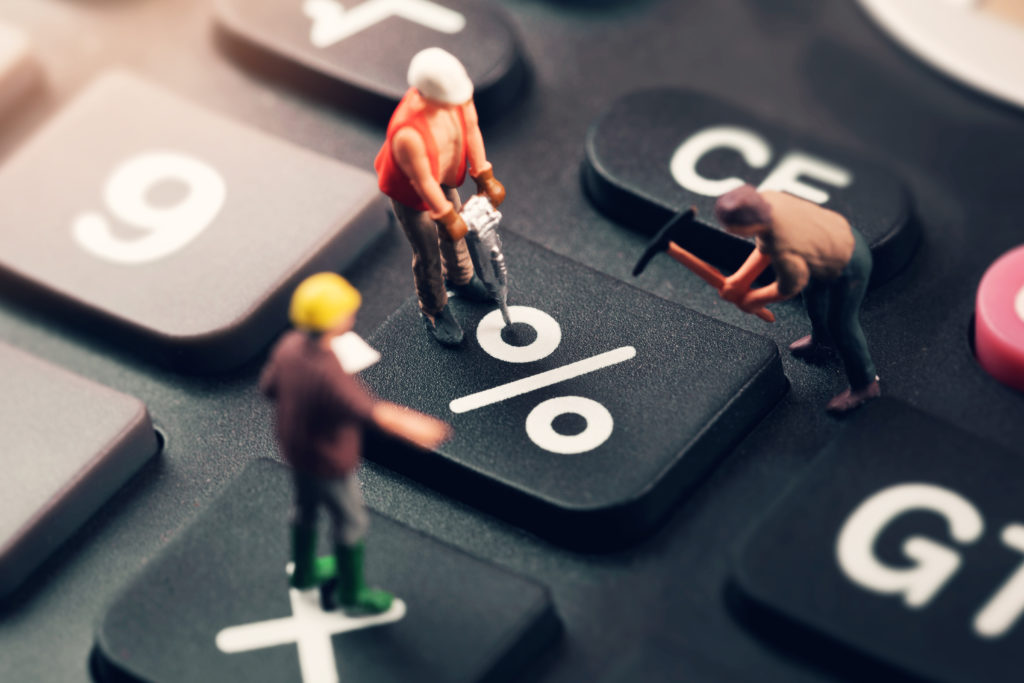 With all of the economic uncertainty around COVID-19, North America’s central banks are on rate slashing spree. On Sunday, the Federal Reserve cut its overnight rate to between 0% and 0.25%. On Friday the Bank of Canada cut its rate by half a percentage point to 0.75%. These are shocking moves in a way, given that both central banks already cut their rates in the first week of March, but it’s clear they think COVID-19 could be far more damaging to the Canadian and U.S. economies than they initially thought.

But how low can rates go? In 2008, the BoC cut its overnight rate to an all-time low of 0.25%, so another 50 basis point slash would bring it to that level. The U.S. is now back to its all-time low, which it previously hit during the recession. However, back then, rates started at a much higher level–around 5%–so both central banks were able to slash more than they can now. In theory, if the BoC and the Fed had to cut further, they could implement negative rates.

Many Canadians likely haven’t heard of negative rates, but now’s the time to familiarize yourself. Here’s a primer on below-zero rates.

What are negative interest rates?

There are a couple things to know before we answer that question. First, the overnight rate, which is an interest rate banks use when lending to one another for one night and which the central bank controls, forms the basis of lending rates. Everything from mortgage rates, lines of credit and auto loans are based on this rate, which, in Canada, is currently at 2%. It can also impact bonds—if the overnight rate falls, yields tend to fall, too.

Second, interest rates are used by central banks to either spur or cool economic growth. Lower rates encourage people to borrow money, which they then use to buy stuff. Those purchases help the economy grow. If the economy gets too hot and people start worrying about inflation or asset bubbles in, say, housing, the central bank would raise rates to discourage borrowing.

Negative rates happen when central banks cut their overnight rate to below zero.

Going negative seems like a drastic measure. What’s the point?

Many financial institutions, which have millions or billions of dollars, store their excess cash at central banks for safekeeping. Normally, those institutions earn a small return on those funds, but in a negative rate environment, the banks get charged by the central bank for storing dollars. That increases the institution’s overall costs. It’s not that the central bank wants the money; rather, they’re penalizing banks for hanging on to their cash instead of lending it out. They want people and businesses to borrow more—at ultra-low rates—which should then help buoy economic growth.

Why are we talking about this now?

On September 11, President Donald Trump tweeted, “The Federal Reserve should get our interest rates down to ZERO, or less.” So that’s one reason. But more importantly, with trade wars slowing global growth, central banks are cutting interest rates again. The U.S. Federal Reserve reduced its interest rate twice this year, including last Wednesday, when it cut its overnight rate from about 2.25% to about 2%. Since rates are so low right now—most developed nations’ central banks dramatically slashed rates after the recession and haven’t increased them back to their pre-recession levels—there’s not much room to manoeuvre in tough times. If the economy gets bad enough, it’s conceivable that the U.S. and Canada could cut so much that rates end up in negative territory.

Is that really going to happen?

It’s unlikely. When the U.S. and Canadian central banks cut rates, they tend to make small reductions of about 0.25%. So, they still have a ways to go before they get to zero. But in a struggling economy—and there are scenarios where the economy could get badly beat-up—negative rates are certainly possible.

The verdict is still out. In both Europe and Japan, lending has not picked up in any significant way and both economies continue to struggle. Could GDP growth have been worse without negative interest rates? Possibly, though economists would have liked to have to see better growth from these countries. Earlier this year, the ECB reported that loan growth, which did pick up in mid-2015, was essentially flat quarter-over-quarter at the beginning of 2019 and down by double digits from years prior. That’s despite having a -0.5% overnight rate. (In September, the ECB cut its rate from -0.4% to -0.5%.)

So, could I get paid to take out a mortgage?

We’re far off from that, but it’s possible. In August, Jyske Bank, Denmark’s third largest bank, said homebuyers could get a 10-year fixed-rate mortgage for -0.5%. So, yes, the bank is basically paying those people to take out a loan.

“Bring on the negative rates!”

Not so fast. If everyone could pay back less of the mortgage they take out, imagine how quickly housing prices would rise. We’d all be buying larger and larger homes. That would create an asset bubble that would eventually burst. In Canada, home prices have climbed dramatically over the years in part because interest rates dropped, making it easier to make monthly payments on high-priced homes. Imagine what would happen if rates were negative.

As well, negative rates would hurt our savings, as savings account rates are also based on the overnight rate. If rates go negative, then consumers will earn nothing on their deposits. People may even get charged for keeping money in their savings account, though it’s more likely that they just wouldn’t make anything. That should encourage savers to either invest or spend those dollars—why save in a savings account that earns zilch?—but deposits in many European banks have actually increased over the years.

Could negative rates impact my investments?

Yes. When rates fall, bond yields tend to drop, which makes them less attractive to income-seeking investors. The main alternative to bonds, then, is dividend-paying blue-chip stocks in stable income-earning industries such as utilities, telecoms and real estate. When rates fell after the recession, stocks in these industries soared. While that’s good for equity investors, that search for yield can make these stocks expensive. You should also see company earnings rise as businesses borrow more and invest in their operations, which is good for stocks.

Rates in Canada are unlikely to go negative, unless some major economic event occurs. Still, it’s something to watch. If you think rates will fall, then owning defensive dividend-paying stocks could be a wise move.